You are here: Home / GOTR / Girls on the Run 5K Volunteer report

Sunday I had the pleasure of getting to volunteer for Girls on the Run of Northern Virginia.  One of my friends convinced me to be a Team Leader and I was assigned to the start/finish line.  My goal?  To keep the girls moving after they crossed the finish line and to keep the parents from jumping over the barricade.  I was mostly successful.

I woke up super early on Sunday morning (thanks, Shoo) and headed out to George Mason University by 5:15am.  There was no one else on the highway AT ALL for the first couple of miles.  You have to understand.  I live right.outside.DC.  There’s always traffic.  Always.  I think this may have been the first time in more than 15 years living here that I’ve been on the road alone.  (I actually had a moment of panic, wondering if the road was closed for some reason LOL.)

I got to the race venue, picked up my t-shirt, and my walkie talkie and headed to the start line.  It was about two hours until the start, so I hung out with my buddy Kathy from Pacers.   As per usual, they were playing lots of roles in the race. 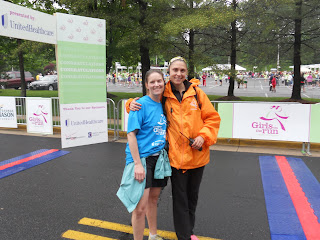 I ended up chatting with the medic.  When she realized I had CPR and first aid training (thank you, RRCA), she drafted me as her backup and I was given a backpack with medical supplies.    (This is where I said a little prayer that I’d not have to see if I actually remember those skills.)

Finally, they started bringing the first corral to the start line for the beginning of the race.  Most of the girls and their buddies were jogging to the line, not realizing they had to stop for the National Anthem and the official start.  Imagine standing on a start line as the first wave of 7000 people heads toward you and you (and one other person) have to stop them.  Yeah, sort of freaky, but they did stop LOL.  After a lovely National Anthem and a ready, set, go by a young lady, I tucked myself in a corner and just let them all run by. 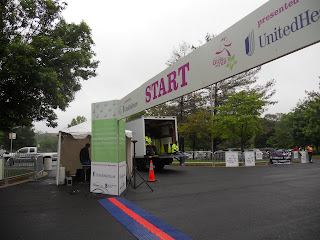 As soon as the start cleared, the real work began.  There was only a few minutes before the first girl came back and that time was spent getting volunteers to police the barricades (parents at these events are just a LITTLE excited), getting the cop to the far end to keep people from coming back into the chute, and generally panicking.  Then I spent the next I have no idea how long keeping girls and their buddies from stopping right at the finish line to take pictures or along the barricades.  I found responsible adults for two lost girls, narrowly missed getting my feet puked on, and avoided trampling a few times as I ran along the finish line keeping the flow going.  Thankfully, the only medical need I encountered was bandaids.

I have never been so tired from a race I didn’t run!  I’m not sure I’ve ever had so much fun either.  Best part?  The medic asked me to be her backup at the finish line at the Dash for Dad race in June.   I won’t be able to run the race now, but I came to an interesting realization today:

I’d rather work a race than run it.

(And I’ll be studying my CPR manual and my first aid book over the next few weeks.)