You are here: Home / Uncategorized / I get knocked down, but I get up again…

(Got the song stuck in your head now?)

Yesterday was a better day.  We started the day with Rolling Thunder.  Every year, we stand on a bridge over 66 to watch the motorcycles drive from Fairfax to the Pentagon parking lot.   This year, I ran from our house to the viewing spot to get my run done before it got hot.  Most amusing things we saw:  a three wheeled motorcycle that was as big as my Civic, a motorcycle with a side car with two kids, and another three wheeler with the front two wheels super close together.  Judging by the sheer number of three wheeled motorcycles, the participants of Rolling Thunder are aging (and broadening). 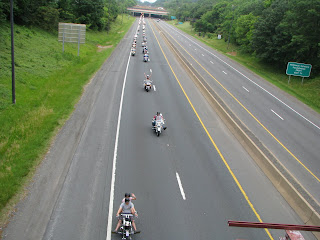 Afterwards, we played at a nearby playground for a while and then headed home to wash the cars.  We got most of the nasty sticky pollen off the cars, but we’re still going to need to take them for a professional wash soon.  Our oak trees were not kind to the cars this year.

The remainder of the day was spent hanging out with friends and drinking good beer.  It seemed like a fitting goodbye to Pete’s Wicked Kitty since he was chosen at the North Carolina SPCA 16 years ago after we spent a day drinking at a brewpub.  It’s weird not tripping over him when I’m making dinner (he was convinced he was a dog and would eat anything that dropped), but the new normal is beginning to feel, well, normal.  Thank you, everyone for your kind words.  They really did mean a lot.

Thank you also for all of your votes for my blog over at Circle of Moms.  I really do appreciate it.  It’s nearly over, so you will soon not be hearing about it any more.  If you could go over and vote today and tomorrow yet, that would be awesome.  Vote for me and any of your favorite blogs.  And then when you are done voting, go over and check out Amanda’s hilarious rendition of the competition.