I have a fascination with the Iditarod. A few years ago, we got to meet Rachel Scdoris, who was the first legally blind musher to finish the Iditarod.  It was amazing to talk to her and meet the dogs.  Such an interesting woman and the boys loved playing with the puppies and getting to go on a “dog sled” ride. (It was summer in Washington state, so no snow).  And you know I’ve been whining about the cold here, can you imagine what the Iditarod is like???

Of course, as soon as I got the chance, I purchased and read The Cruelest Miles, a book about the origin of the race. In 1925, a diptheria epidemic brought about the need for delivery of an antitoxin to Nome, Alaska. The only way to get it there was by sled dog teams.  Of the teams, Leonhard Sepal and his lead dog Togo traveled the most treacherous stretch. Togo was the smallest lead dog and they covered a much greater amount of terrain than any other team.  This is what led to the creation of the Iditarod race years later. And as you might surmise, TogoRun is named after Togo. Anyways, both Rachel’s story and the story of Togo are amazing.

So, when I heard that TogoRun and Rx Response,  a non-profit coalition that works to ensure the delivery of medicine and medical supplies is not disrupted when disaster strikes, were partnering to host a twitter chat with DeeDee Jonrowe, an Iditarod Musher, I was pretty excited! I can’t wait to “meet” them. 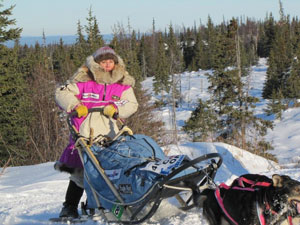 Join me!  Here are the details of the Twitter Chat:

This post is sponsored by FitFluential on behalf of TogoRun.