You are here: Home / cold / Love the Run You’re with 5k race report

AKA sometimes you have to leave it all on the course.

It’s been a long time since I’ve been in “racing form”.  I feel like I’ve been trying to come back from injury since Thanksgiving of 2010.  I’ve had some good runs since then, but no really good races and most of my speed work has been on the treadmill.  I’ve been dying to know where I am.

And I chose Love the Run You’re With to find out. 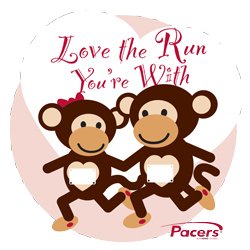 I set out with two goals:  26:xx on the clock and leaving everything I had on the course, possibly even my breakfast…

The day dawned wicked cold and windy.  The “feels like” temperature was 12.  I wore two pairs of running tights, a tank top, two long sleeve shirts and my running jacket plus hat and gloves.  My Brooks Pure Connects were warmer than my Vibrams, but they were still wicked cold because of the ventilation.  (Just for the record, even running flat out, I never got too warm).

I was running with my dad and he attacks hills, so we got up the nasty hill at the start with a pretty decent pace.  I thought no further than the next step and just focused on his back.  First mile: 8:40ish.

After the first mile, I knew this was going to be a tough race.  I made it my goal to keep up with my dad as long as I could.  I got to the halfway point and turned around.  I had the stupidest mantra going through my head “Just keep picking them up and putting them down.”  WTF?  Whatever, I was just trying to keep moving forward.  Second mile: 8:10.

And that was the end of my race.  Unfortunately, I still had 1.1 miles to finish.  The next .6 until the downhill was just about getting from cone to cone (and they were only about 10 yards apart.)  Finally, I crested the last hill and headed into the fast downhill.  Except my legs would.not.turn.over.  Seriously.  They were just done.  I gave everything I had, but I’ve never been passed like that on a downhill before (I’m really really good at using gravity LOL).  I came around the turn to the long straight finish and pulled out what little I had left.  I crossed the finish line and couldn’t decide if I was going to pass out or puke.

Moral of the story?  Sometimes you just have to go balls to the wall and see what happens. Even if it blows up in your face.