You are here: Home / travel / Maine Running = Teh Awesome
Running in Maine in the summer rocks! My body is used to heat and humidity, so getting the chance to run without that resulted in some awesome runs. Besides my PR in the race, I managed to run three awesome runs. The house we stayed at (Anne’s Seaview Cottage, which was awesome) was on a hilly road, with a few side roads that were awesome for speed work. My slowest run was a 5 mile run in 45:29 (9:05 average)! I also did a run with some speed work in the middle and managed 5.5 miles in 48:19 (8:47 average). My final run of the week, which was at what felt like an easy pace, ended up being 4.5 miles in 38:55 (8:39 average). Wish I could always run that fast without feeling like I was pushing myself!
In our last couple of days, we went out on a boat to see puffins, seals, and other cool wildlife. We also did a lot of walking around on the very rocky beaches, hit another winery (sorry Glaven, no easily accessible brewpubs), and checked out a few more lighthouses. I learned that the next time we do a vacation like this, I need to take my Merrell Waterpro’s . I kept ending up with wet running shoes or slipping while wearing sandals.
Climbing rocks with the boys (note the inappropriate footwear) 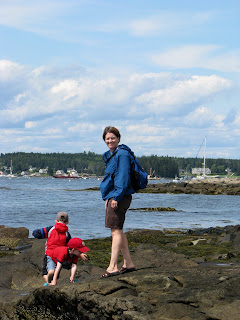 Saturday morning, we hit the road at 6am for our drive home. We made decent time, thankfully, and had enough time to stop at the High Point of New Jersey. (Yes, this is indeed one of the instances where Beer Geek earns the “geek” part of his name.) In addition to the actual geographic high point, NJ has erected a 220 foot tower on the spot. Inside are stairs leading up to what is supposedly an awesome view. Jones discovered he has a fear of heights and he and I climbed the first four sets of steps multiple times as he tried to conquer it and go to the top. Beer Geek and Shoo, on the other hand, made it all the way up.

Shoo at the top of the monument. He climbed all the way up and all the way down!
(Apparently prompting several struggling climbers to comment that “if he can do it, I should be able to do it” LOL) 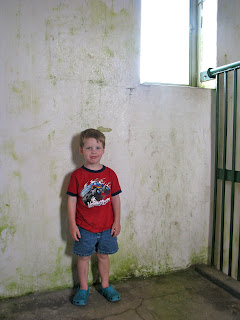 We are home now and the weather forecast calls for temps in the high 90s/low 100s. I ran on the treadmill today and it was not a fun run. I did, however, manage to hit 20 miles for the week, even with being on vacation. I also didn’t gain any weight while on vacation and may in fact have lost some.

Now to survive a week of ridiculous hot while Beer Geek is on travel for work. Lucky me.