You are here: Home / beer / Make me happy

So, Xenia decided to tag me for the “10 things that make me happy” post that is going around. She mentioned she chose some of her 10 “tags” knowing that some of those would not do it. I considered placing myself in that category. I also consider doing 10 things in pictures or listing 10 things in one word (BeerGeek, Jones, Shoo, parents, running, books, coffee, traveling, researching, sleep), but meh, none of that worked for me.

So, instead, you are all going to be treated to “10 Beers that make me happy”* with a little commentary to entertain those of you who are not interested in beer. ;o) 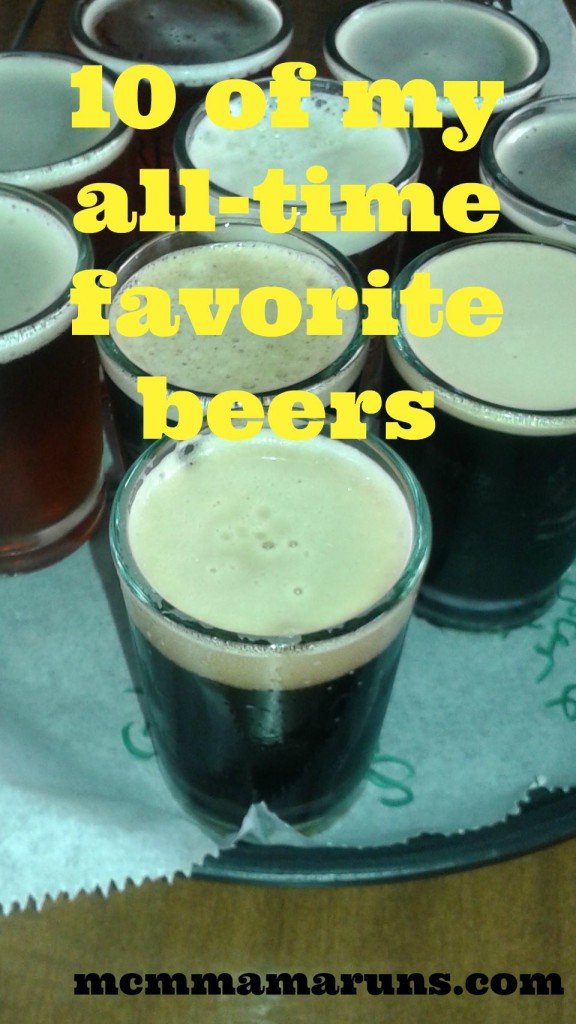 1. Dragon’s Milk Ale from New Holland Brewing – I first encountered this beer at Savor last year. It was the only beer I tried more than once. I “tried” it four times and on the fourth time the brewer gave me a sticker because I’d been back so often. I currently have 9 bottles of this in the basement and it tops the list of “Beers I don’t like to share, even with my husband”.
2. Black Chocolate Stout from Brooklyn Brewery – Back in our pre-kids days, we used to attend a big brewery festival down in North Carolina. That was the first place I ever had this beer and I spent a long time talking to the brewery rep and drinking this beer. Now, I tend to be a pretty physical person (I’m likely to hug you the first time I meet you) and a couple of beers means I’ll likely pat your shoulder, hug you, hold your hand, etc. while I’m talking to you. Well, when we returned to this festival the next year, I was excited to see they had this beer and immediately went up to get a sample. As I walked up, the rep looked up and yelled out “Hey, it’s touchy feely girl!” Oops.
3. Kasteel Donker – We discovered this beer on my first trip to Belgium (Beer Geek had been many times). I loved it so much that we brought an entire backpack full home. (Back in the days when you could bring liquid on a plane.) The backpack was so heavy I started tipping over backwards if I stood still for too long, but I was excited because I LOVED this beer. Not much later, I happened to be shopping at Whole Foods and discovered I could buy it less than a mile from my house. D’oh.
4. Palo Santo Marron from Dogfish Head Brewery – Sam Calgione (the Founder/President of Dogfish) offered a case of this beer if you bought tickets to Savor two years ago. I immediately jumped up and bought my tickets. A few weeks later, we drove out to the brewery to pick up our cases and get a tour and taste some beer. Beer + a day spent at the beach = my worst race experience ever.
5. Anchor Porter – Beer Geek used to bring this beer when he’d come down to visit his fraternity. I knew I was one of the “cool kids” when I got to be one of the people who got one when he’d visit. (I was still a student and you could still see through the beer I drank AKA cheap yellow beer). I love the taste of this beer, but even more, I love the memories it brings back.
6. Alaskan Smoked Porter – I love this beer so much that we have some shipped to us every year. This beer is one that can be aged and we have every year from 2002-2009, except 2005. In 2005, Shoo was a newborn and I just couldn’t manage the hour+ each way to pick up beer from the freight delivery place. Thankfully in 2006 we discovered Liquid Solutions and no longer have to drive to pick it up. This makes me a very happy camper.
7. Anchor Christmas – Every year, we host a “holiday beer” tasting party. At our peak, we had 27 different beers to taste. Just for the record, that’s way too many beers. Trust me. I think this year we’ll be stealing Jamoosh’s “12 beers of Christmas” idea.
8. Baltic Porter from Old Dominion – Sadly, Dominion Brewery is no longer in Virginia. Old Dominion beers are now being brewed in Delaware. I can taste a difference between last year’s beer (brewed in VA) and this year’s (from DE) and prefer last year’s. If I give you a Baltic Porter from last year’s case, I must REALLY like you.
9. Saranac Black and Tan – Saranac was a “gateway” beer for me. It was one of the first non-Budmilloor beers I ever had and I fell in love with beers with flavor. I loved it so much our first cat’s name was Saranac Black and Tan (she was a tortoiseshell) . I’m not sure that they still make this beer, but they have quite a few good beers still.
10. Pete’s Wicked Ale – Another “gateway” beer for me. Our second cat’s name is Pete’s Wicked Kitty. (And the only reason we even have a cat is because Beer Geek took me drinking at a brewpub and then took me to the SPCA. Twice. Apparently beer makes me like cats. ) This brewery went out of business. I’m still sad about that.
There you have it. Today’s a rest day, so I don’t have a single running related thing to say. Happy Friday!
*Beers are in no particular order. I love them all. ;o)