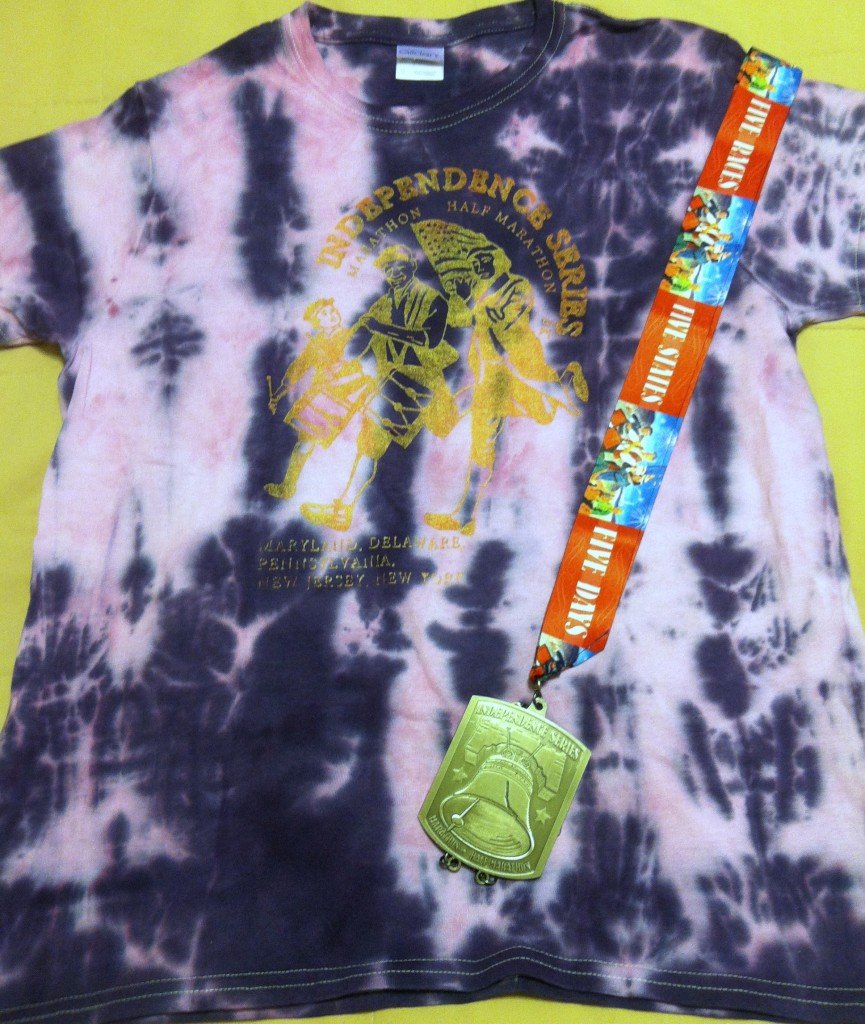 Temp: mid 40s and sunny for start but high 70s by end
What I wore: hat, short sleeve shirt, Skirt Sports Happy Girl skirt,
PROCompression socks, and my new Altra One^2 (instead of the planned Intuition) 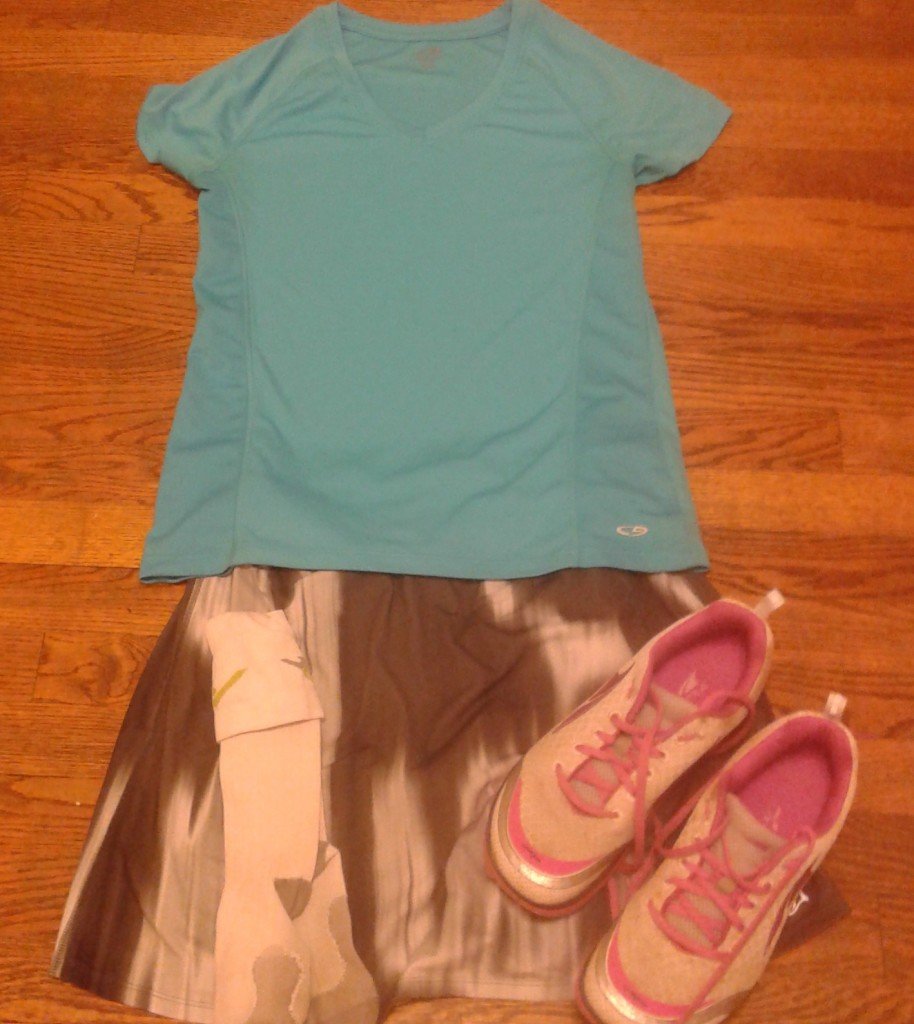 After running New Jersey the day before, I woke up extremely nervous about this race. My quads were sore, one toe was swollen and painful, and I was generally tired.  Add in the prediction of 70+ degree weather and I really wondered if I was going to be able to make my goal of finishing (I’d long since thrown away my sub-5 hour goal).

Kim and I headed over to the start at an early hour. We’d stayed at a lovely Airbnb, but I needed coffee and I knew they’d have some at the start line. I grabbed a cup and we met with everyone to hear about the course. 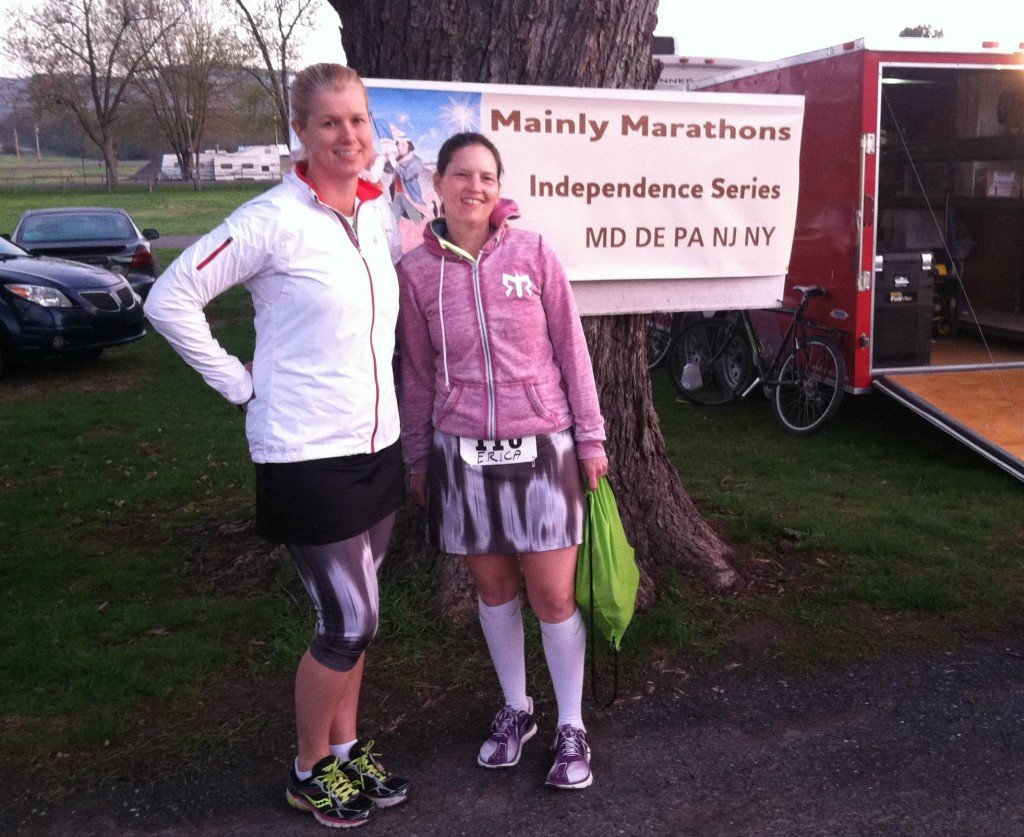 Ugh. It was 20 laps! If I wasn’t freaked out beforehand, I was at that point. Then he gave us the description: out of the start area, around a loop, around a corner to an out and back, through a cattle barn (What the What?), and back around the loop in the opposite direction. To say I was confused would be an understatement, but quickly it was go time and I just followed the crowd.

I started the race wearing a half zip, knowing that I would not wear it for more than a lap or two.  As confused as I was at the start, I quickly discovered the beautiful thing about this weird course: you were constantly passing or meeting friends. The course itself was quite flat and somewhat shaded in the early morning, but I knew that would quickly end.

And the cattle barn? It offered the opportunity for head on collisions, a bit of shade as the sun moved up in the sky, and a soft dirt area that I hated with every fiber of my being.

The first half of the race passed quickly and easily. I fell into a rhythm of walking in a specific spot on the way out and the same spot on the way in. I got a snack every third time I hit the start line and changed out my rubber bands when I hit five rubber bands. I chatted up everyone as I went around and felt pretty amazing for the entire first half. Kim finished and headed back for a shower and snack and I finally wrapped up the first half in 2:27:03.

I decided I needed to do a reset at that point. I changed my shirt, wiped down my face, and started a new race on my Garmin. Yep, I was just going to run another half marathon. 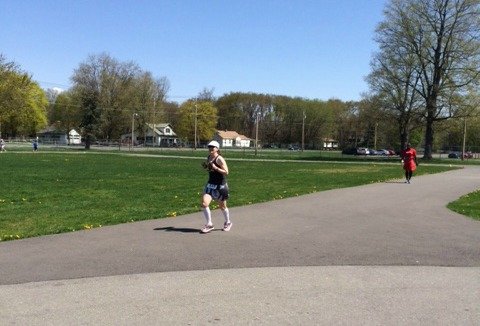 By this point, it was pretty warm out and the only real shade on the course was in the cattle barn. I was having a bit of a love hate relationship with it by then. 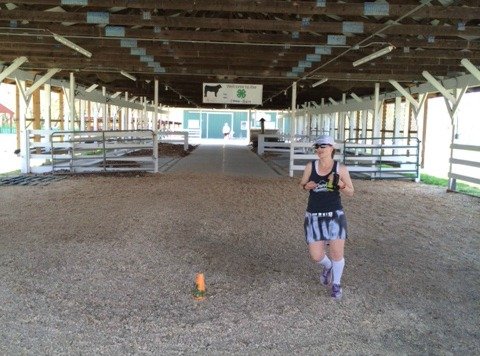 I was also starting to get tired. Thankfully, the people who run Mainly Marathon races are some of the most supportive people ever. Every few minutes someone was cheering me on. I had people walk with me, run with me, cheer me on, tease me… Seriously it was a running party.

Once I hit mile 20, I realized I was pretty much done walking. My body just could not handle the transitions any longer. It was easier to just run slowly than to try and move back and forth from walking to running. Slowly but surely, I knocked off the laps. I had reached the point where I could no longer eat real food and was relying entirely on Gatorade. In fact, I drank my entire 10oz bottle each and every lap for the last 3-4 laps. 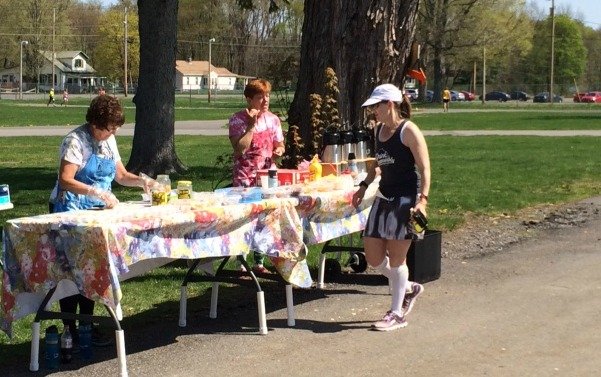 Finally, I hit the last lap! Kim had returned and was there to cheer me on. Another friend challenged me to run the last lap with her. (I may have called her a few names.) I tried to keep up with her, but I just couldn’t, so I just kept moving as quickly as I could. I picked it up to run into the finish and got cheered on by everyone at the finish as I earned my Marathon Maniac status. 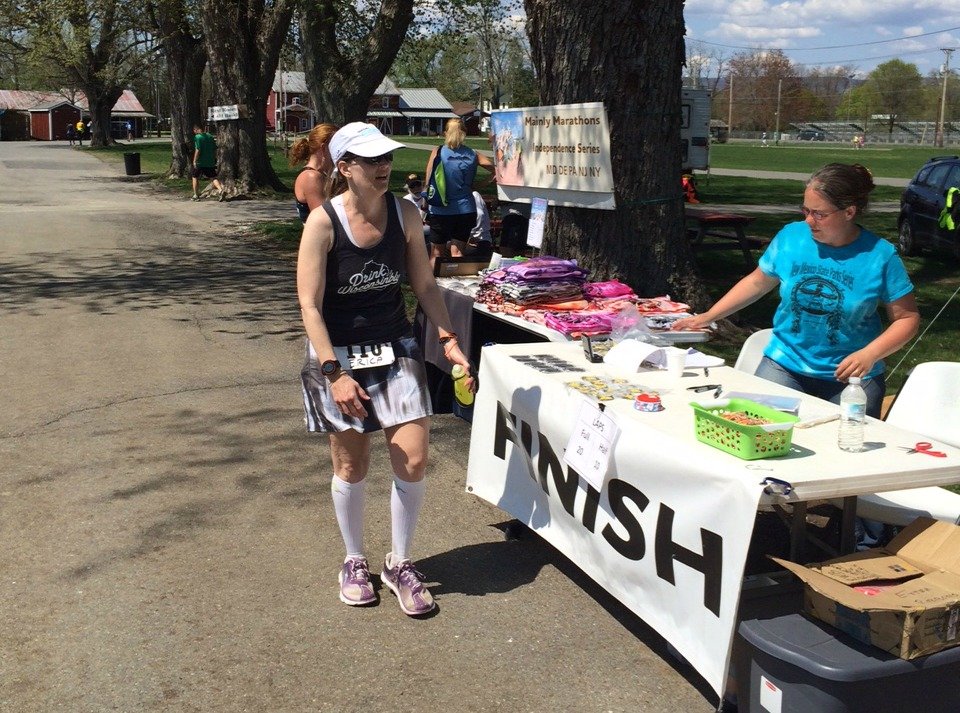 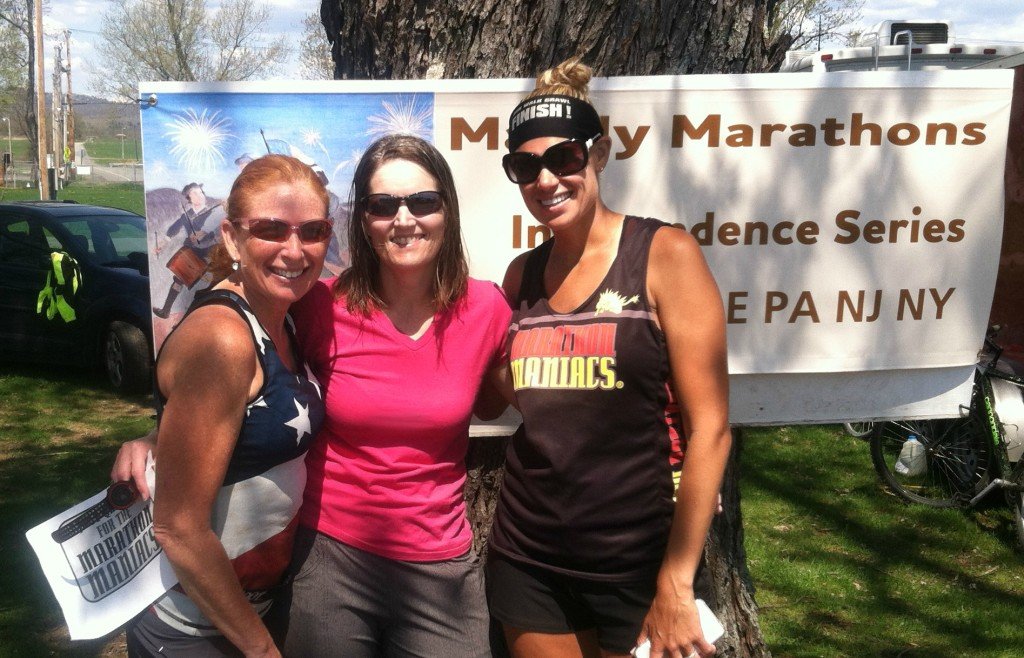 [Tweet “Thinking about running 2 marathons in 1 weekend? #Racereport for second day in a row. #marathonmaniacs”] 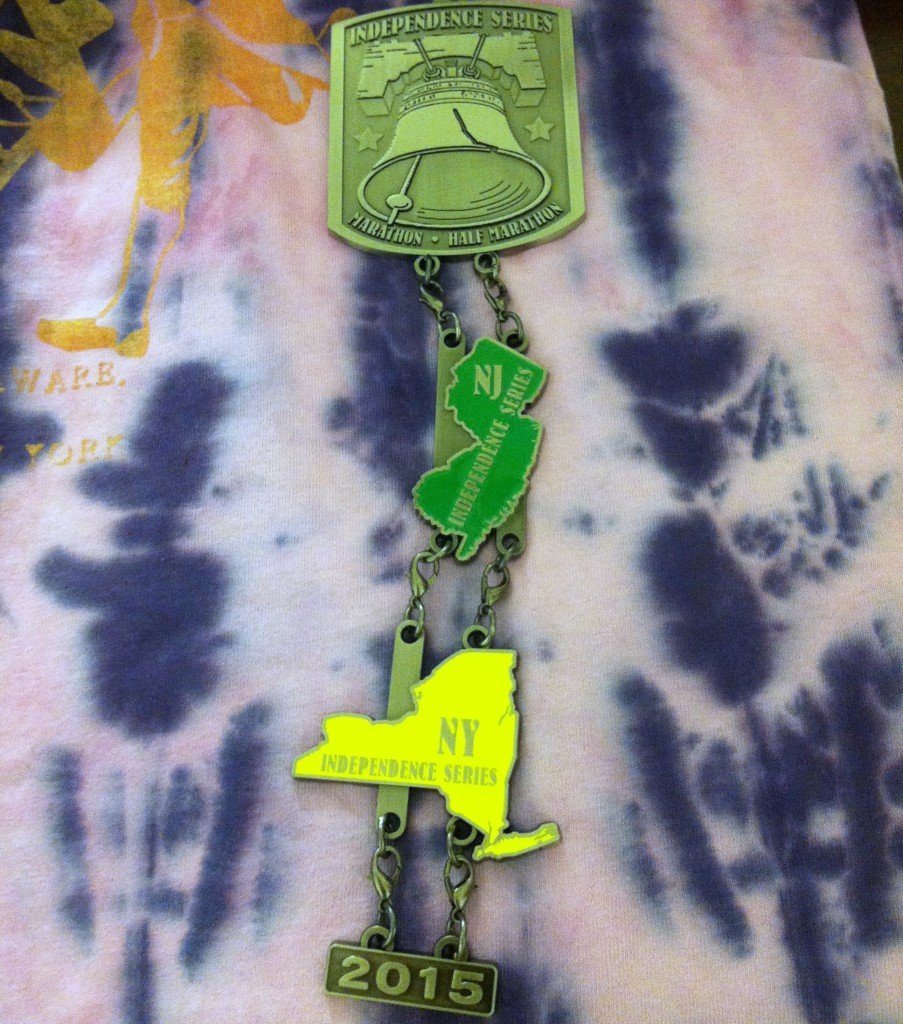 As I said in my first marathon report, the loops that I love for the half marathons got a bit tedious, although I did like this one better. I will definitely do another Mainly Marathon series, but I doubt I’ll do another full with them again. I’m not saying never, but it’s unlikely. Instead, I’ll run my marathons in cool cities to visit and save Mainly Marathons for my crazy half marathon adventures.

The big question now is “What next?” I’m sure you can guess…