You are here: Home / Uncategorized / More than you ever wanted to know

This report is going to be super long.  I need to get it all out of my head and onto “paper” so that when I consider doing this again, I can see what I was thinking.  Not that that stopped me from running a second marathon after saying “never again” during the first.  Grab a beer (or coffee or wine, whatever) and settle in.  Or, just look at the pictures LOL.

Pre-Race
I was a nervous wreck the day before the race.  This was at least in part because I had to pack for the marathon and for the trip.  I got to a point where I was practically shaking.  Finally, we had everything in the car and started the trip to York.  Less than a half hour into the trip, we hit a huge backup on the beltway.  As in, completely stopped.  We ended up getting off at the next exit, going back the other direction, and catching a different road.  Finally, after a totally stressful drive,  Beer Geek dropped me at packet pickup.   There were no signs in the lobby of the hotel to tell us where to go (the one and only organizational negative of the whole race), but I found the pick up and got my packet.  They had switched to technical t-shirts (Yay!) but the size medium is a dress on me (boo!).  Oh well, I’m sure I’ll still wear it.  When we finally got to our hotel at 4:30, Beer Geek was beat and we discussed going to the  Ruby Tue.sdays next door for dinner.  Anyone who’s read this blog for a while knows how painful that would be for us.  I convinced him that it was worth it to drive the 20 or so minutes to a brewpub in Mount Joy (I even offered to drive – which he took me up on for the drive back.)  Anyways, the brewpub was awesome, the beer and food were good, and we were all in a better mood when we got back to the hotel.  We took a quick swim with the boys, I laid out my clothes, and we all hit the beds nice and early.

Where I proceeded to not sleep at all.  Sigh.  I got up at 4:15, got ready, and RunningLaur and her mom picked me up around 5:45.  (HUGE thank you to them both for allowing me to let the boys sleep in and still have them be at the finish. )  It was cool out (I wore a pair of Beer Geek’s old socks as arm warmers, ’cause I’m classy like that.), but I’d prefer cool to hot any day.  I got the chance to meet Abby before the race and then it was time to line up.

Right before the race, I decided I’d aim for 10:18 miles, which would bring me a 4:30 marathon time.  Nothing ventured, nothing gained, right?  The race was not chip timed, but I knew I didn’t want to race to hard at the finish, so I hung at about the middle of the pack with RunningLaur and one of her friends.  We stayed together for about the first mile, but near the end of that mile, she wanted to stick with her marathon plan and I’d fallen into a nice groove right around 10:15 miles.  I also happened to be running right behind Tammy and was enjoying listening to her talk to another runner about her ultramarathons. (One of these days I need to introduce myself or she’s going to think I’m a stalker LOL)  I was bummed when it became apparent around mile 2 that they were going to be going just a bit faster than I wanted to go and they moved ahead of me.

We split somewhere near mile 11 when he stopped to fill his water bottles.  I got to wave at him after the turnaround, but from mile 11 on, I was on my own.  I felt GREAT at this point.  I’d taken GU as planned and had something to drink at every water stop.   Unfortunately, once I was completely by myself, I started speeding up.  The next five miles were my best miles, both in terms of how I felt and my speed.  Miles 11-15 – 10:22, 10:07, 10:04, 9:54, 10:02.  If a marathon were 15 miles long, this would have been an amazing race.  Sadly, it’s 26.2.The first part of mile 16 sucked.  I was feeling sick to my stomach and exhausted.  In retrospect, I think it was because I had pushed too hard for four miles, waited too long to take my 3rd GU, and had run through two of the water stops in that area.  I don’t know if taking it easier would have made much of a difference in my final time or in how I felt near the end, but I’m pretty sure mile 16 would have felt better.  Thankfully, there was a water stop in mile 16, where I got a half of a banana as well as water and  whatever the sports drink was.  The banana was the best thing EVER.  It settled my stomach.  While I never really regained my speed or my energy,  I did at least stop feeling like puking was imminent.  Mile 16 took me a little over 11:30, which was my slowest mile until mile 25.

The remaining 10 miles are pretty much a blur.  This was one of the reasons I will never run a marathon on a trail again.  I was completely alone.  As in, I could see a runner in the far distance occasionally, but really, for the most part, all I could see were flowers and trees.  I should have pulled out my ipod, but I just didn’t have the energy.  I walked every water stop and I did some GUs.  Along the way, I saw a guy skipping the marathon.  As I followed him, I gave that a try and discovered it loosened up my very tight hips.  I’ll have to remember that!  I passed him and kept on going.  At mile 20, I called Beer Geek and told him I had about an hour to go, so that they knew when to meet me.  At mile 23, the back of my left knee began to hurt, but not enough that I couldn’t run.  I found that running slowly didn’t feel any better than running faster, so I tried to push myself.  It’s really hard to try to push from landmark to landmark when there are no landmarks.  I kept making myself run to the next tree or the purple flowers or occasionally a big rock or bridge.  I was starting to get a little loopy and wanted to stop, but I just kept counting down tenths of miles on Garmin. 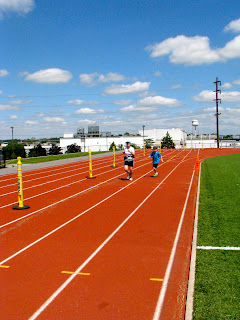 That last .2 involved the only hill to speak of and then about .1 on a track.  I trudged up the hill, figuring I had nothing left to give.  However, as I stepped on the track, they announced my name and I could see my boys on the infield, near the finish line.  I started picking up my speed, knowing I wanted to have nothing left at the end.  As I got near Jones, I yelled at him to join me.  He thought I was crazy, but he started running.  As we got closer, I was still picking up speed and Shoo jumped in too.  Typical of his personality, he stayed ahead of me and I had to give everything I had to try to catch him.   I don’t know exactly how long that .2 took as I forgot to turn off Garmin, but my best pace during that time was a 7 minute pace! 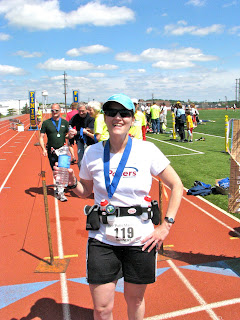 After the race, we hung out in the mid-field for a bit.  I was covered in salt and exhausted and my legs were cramping up, but a friend and her family had driven a couple of hours just to see me finish, so I wanted to talk to them for a bit. 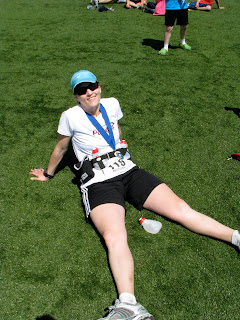 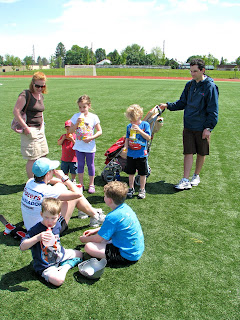 Some volunteers came over and gave me and the boys cookies and bananas and then we raced back to hotel to clean up and drive home.  Our drive home went as well as any drive on a Sunday near D.C. can go.  Which basically means that by the time we got home, Beer Geek was in dire need of some quiet time.  I spent the remainder of the day rockin’ my compression socks (CEP compression socks recommended by my LRS and Recovery Socks I won from Erica) while unpacking, doing laundry, and hanging with the kids.  I’m convinced that the walking up and down the stairs yesterday is why I’m feeling good today.  My sore knee has stopped hurting and I’m a bit stiff and tired, but generally I feel great! 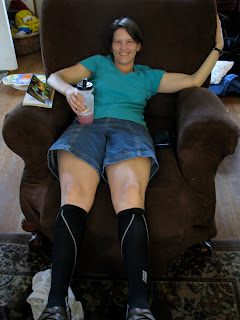 I have to give kudos to Sean Potts and the rest of the organizers.  It was a really well organized race, with great snacks during and after, awesome volunteers, and wonderful water stops.  I would, however,  not do it again.  I’ve got too much “city” in me to spend that much time by myself on a trail.

So, what’s next?  Not another marathon.  I’m thrilled with the time I managed and I’m thrilled that all my miles were sub 12 and most were sub 11.  I’m not going to say never (that 4:30 is still whispering my name), but I am going to say not for a while.  I realized during training and during the race that I love running until about 15 miles and then I hate running.  HATE running.  Since I run to stay happy and sane, hating running is not a good thing.

Tomorrow or Wednesday:  Check back for my “Beer is Good” giveaway to thank all my awesome readers, especially those 151 of you who follow!