You are here: Home / Uncategorized / National Half Marathon report

This half was the final piece of my Cupcake Virtual Marathon. 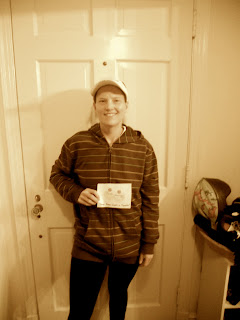 (Not sure what’s up with the color, but
notice the excellent $3 Target sweatshirt)

Short story: It wasn’t my best half, but it wasn’t my worst. I finished in 2:13 and didn’t throw up.

Long story: I got up at 3:30 am to get ready to be picked up at 5am. I’m not a morning person, so I was less than thrilled by this plan. Virginia decided to have one more dance with winter (more on that later), so I dressed in running tights, a tank top, a long sleeve shirt, and a windbreaker (with a throw away sweatshirt on the top.) I was still cold at the start line.

We drove to the DC Armory and spent as long as we could inside. Finally, after one last stop at the indoor bathroom (which really was only better than a porta potty because it had lighting. Yes, it was that gross), we headed to the start corral. I was WAY back in Corral 8. Fortunately, that was also the start place for the 4:20 marathon, so I got to meet Laura from Absolut(ly) Fit. It was fun to finally meet her.

I started with a friend who was doing the full, so I started slow (as planned). It took us 20 minutes to get to the start line, but I wasn’t in a hurry. At mile 1, we both realized a porta potty stop was needed. Thankfully, there was no line and I felt SOO much better. At about mile 2, we hit some nice downhills, so I left my friend and sped up. This was all great until mile 5. At that point, I realized I hadn’t eaten since 4:00am and it was after 8:00. I took a Gu and then the hills started. I’m a DC area girl, so I know hills, but OMG these hills sucked. I just kept going. I danced to music, slapped hands, yelled, and just kept running. My stomach was pretty pissed about the Gu, so I wasn’t going fast, but I just tried to maintain a good attitude.

After mile 8, the big hills finally ended. For the next 4 miles, it was a mix of ups and downs. I kept thinking I needed to dig deep and push hard and, well, I just couldn’t find that gear. Finally, I got to the last mile. My quads were shot and I was running on empty (I was afraid to eat another Gu), but I picked it up as much as I could. This was the only mile where I saw some 8s as the actual pace on my garmin. As we headed around the last corner, I started sprinting and I’m pretty sure I passed about 30 people. I crossed the finish line and couldn’t decide if I was going to throw up or pass out. ;o)

It took a bit to get out of the Finish area and I made one last stop at the nasty bathrooms and then metroed home. It took me more than an hour to get home and I was freezing by then, so it’s pretty safe to say I won’t be doing this race again. All in all, despite all the logistics, I ran hard and I’m happy with what I did. I trained to finish and I finished strong.

Next up? Building my minimalist shoe running miles. Right now I’m totally in a honeymoon time with my Merrell Pace Gloves and I plan to ride that as long as it lasts.