OK, I know you all are going “WHAAAT??” No, I haven’t been hiding secret triathlon training from you nor did I actually race a triathlon this weekend. What I did was volunteer at the Peasantman Triathlon for a few hours on Sunday morning.

Peasantman is held about an hour and a half south of DC on Lake Anna and from all appearances, it’s the perfect first triathlon. Everyone is super laid back and you can do a sprint or olympic distance or you can mix it up and combine distances or change your distance on the fly. Heck, a few people just did it as a duathlon and I know two of my friends just did the swim and bike. So, yeah, Peasantman is the perfect low key race to get your feet wet (pun intended) at a triathlon. 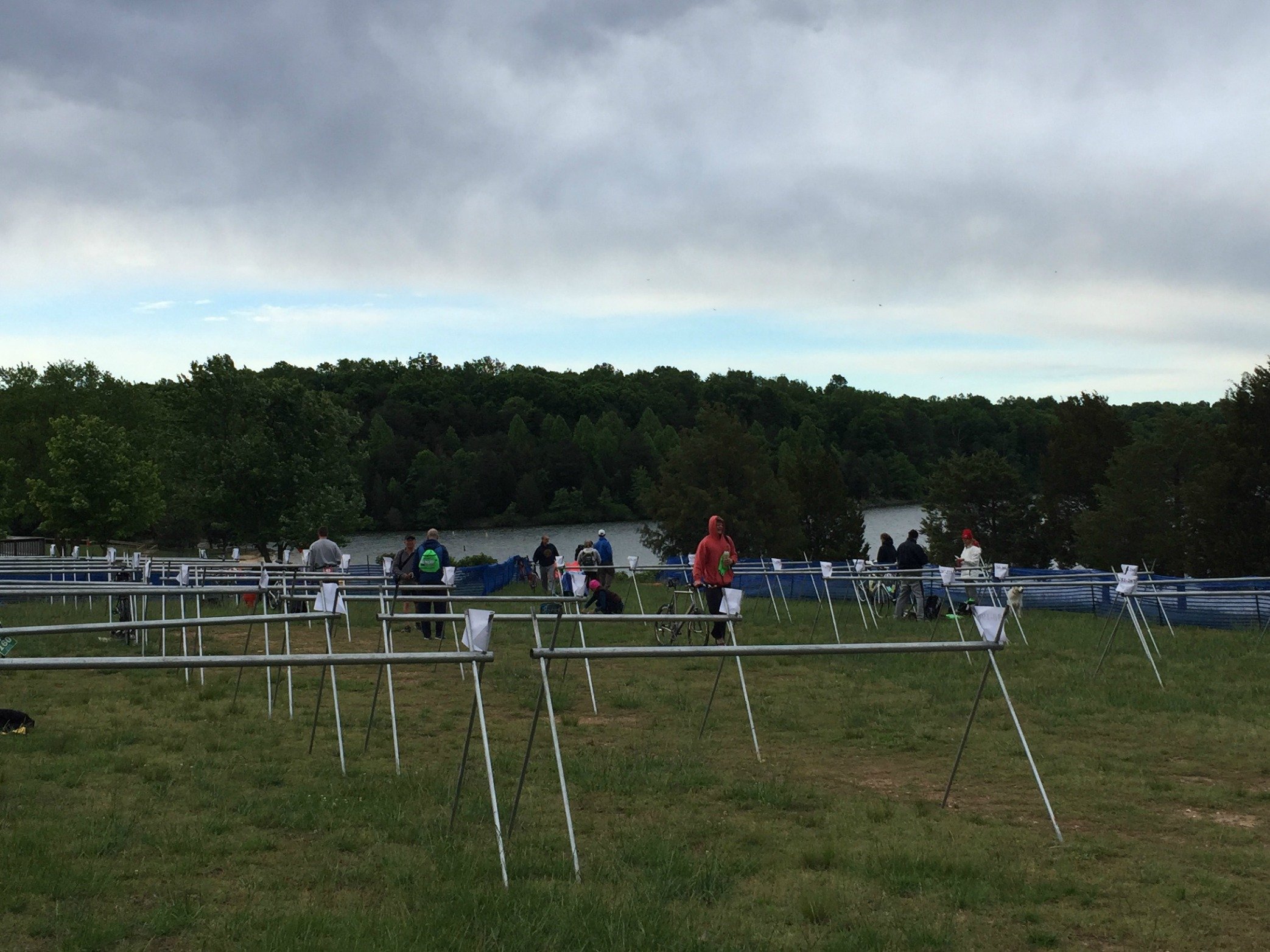 I started the morning in the bike transition area, handing out caps. I loved that they had caps for Sprint, Olympic, and “I’m scared I’m going to drown.” They were also marking people with their numbers on their arms and their relationship status on their legs. Who can be uptight about a race when you are marked like that rather than your age? 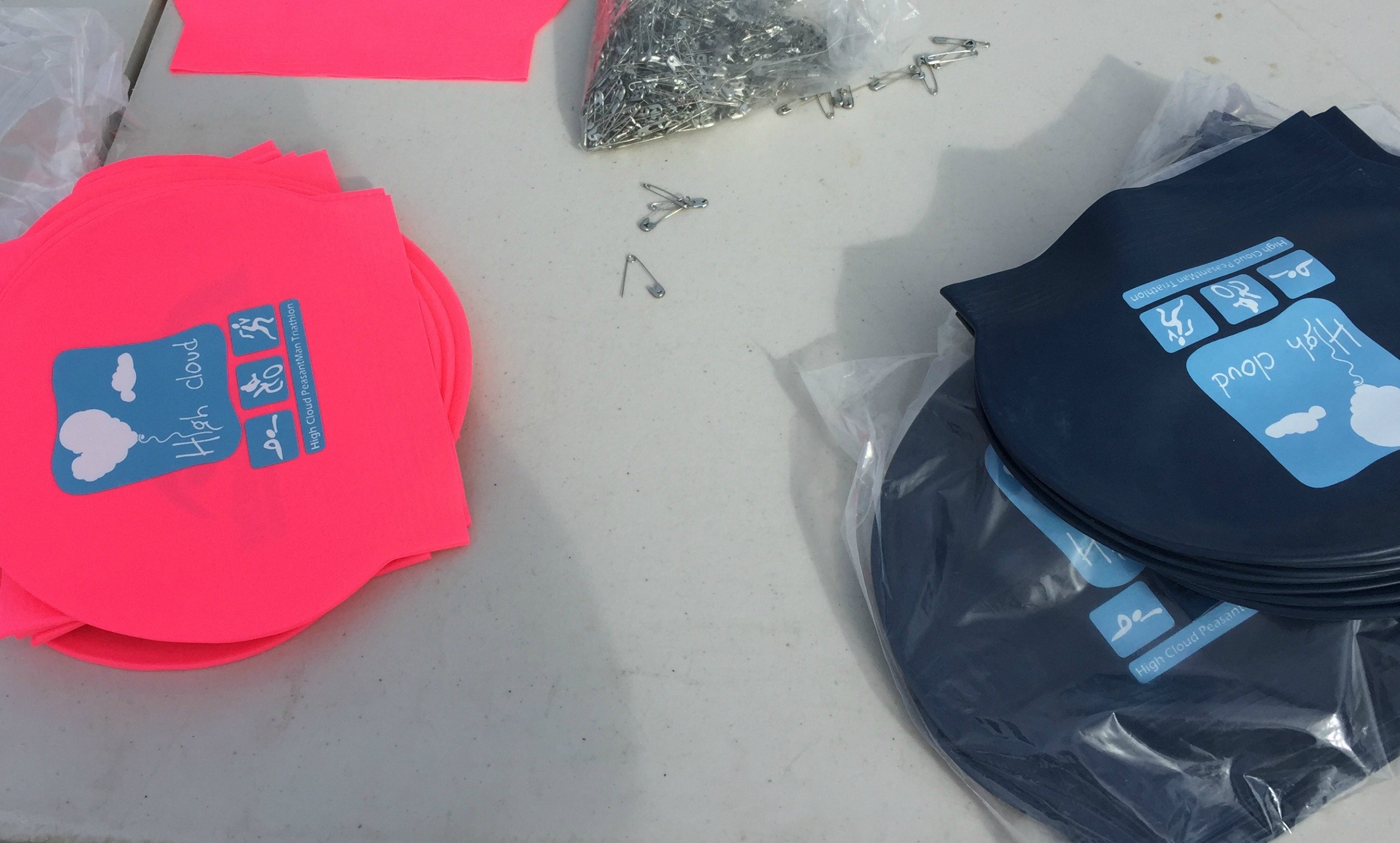 After everyone headed to the water, my next task was to tape arrows for the run course. This allowed me to watch the swim start and finish. 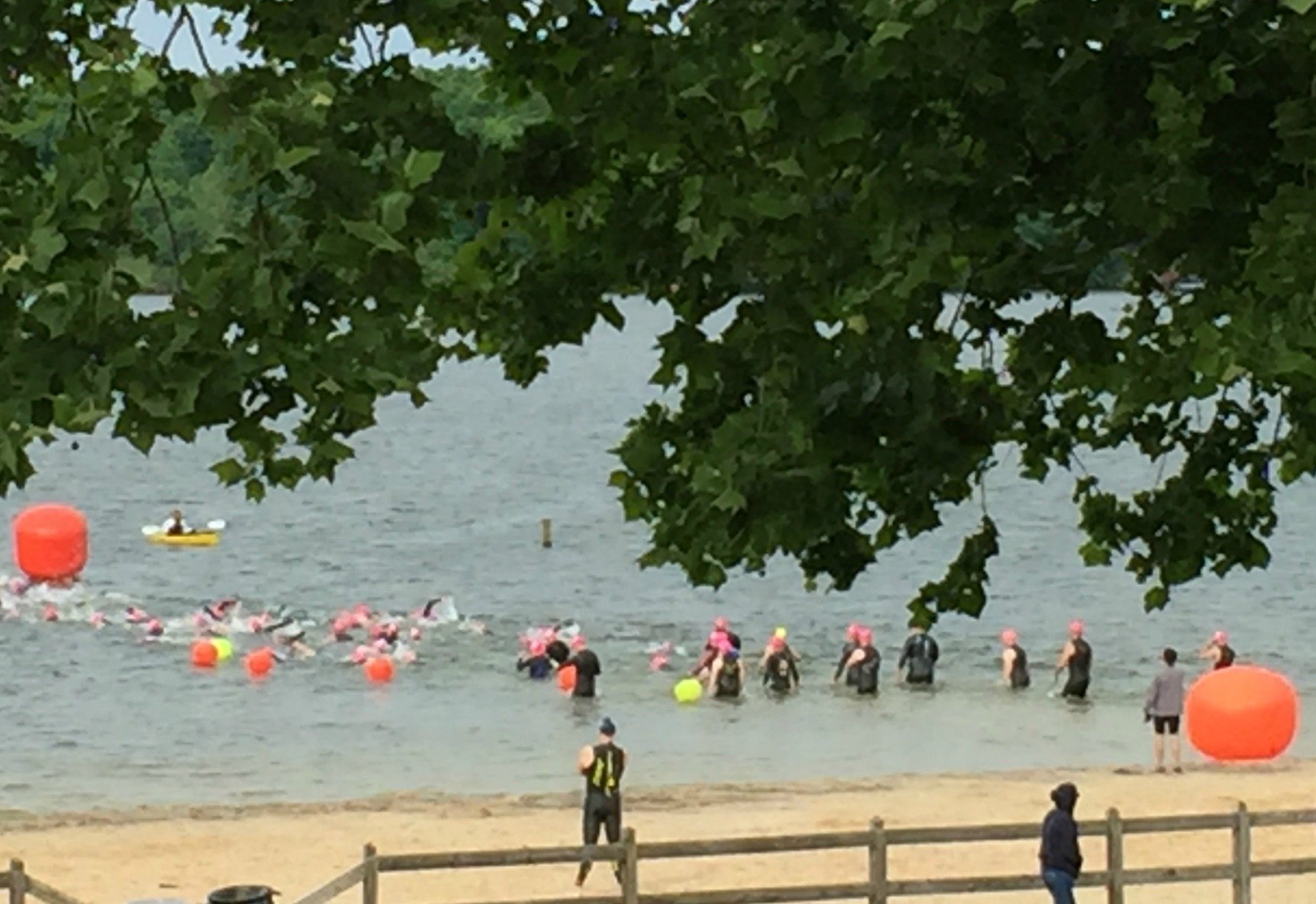 I was just finishing up as the first swimmers came out of transition. It was amusing to watch the wetsuit strippers and even more amusing to hear the commentary from the announcer, including such lines as “do you need a cigarette after that?” 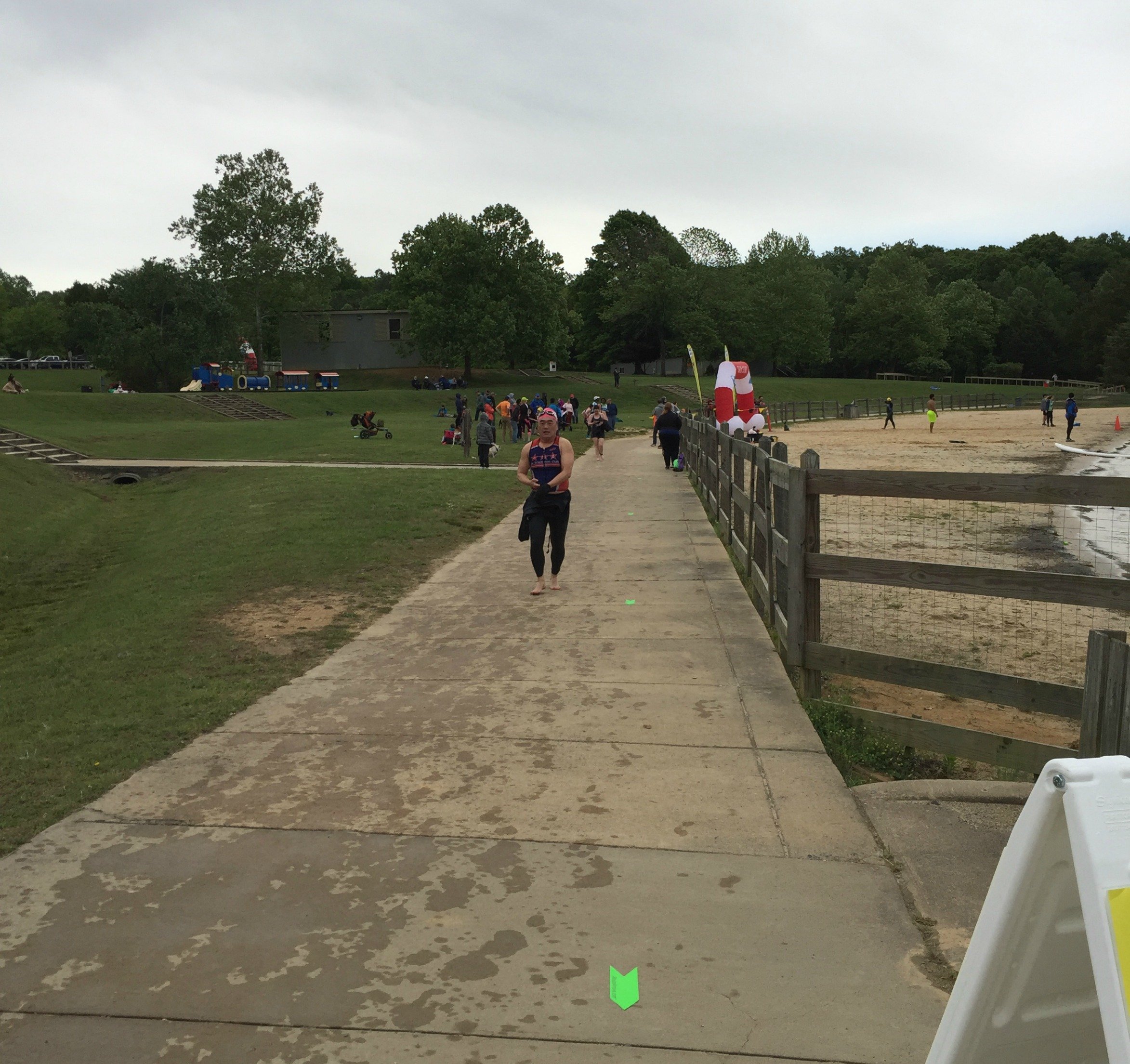 Next up was offering guidance at the bike out area so that no one got on their bike on the gravel. My main role there, though, was to watch for the first biker to return so that I could head to the run turnaround. 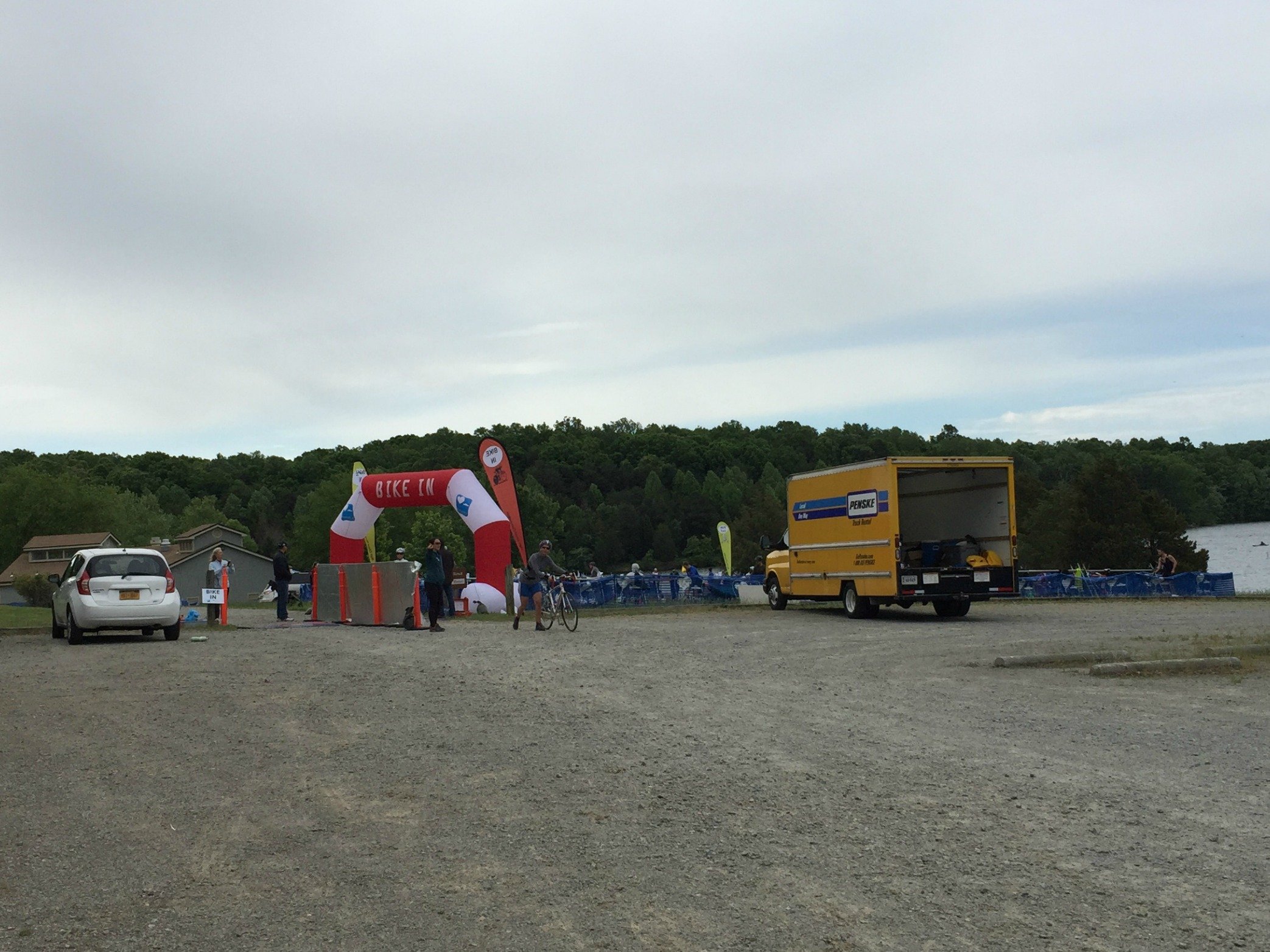 Once that happened, I spent the next two hours telling people to turn around and go back the way they came. Since the finish line was in the direction I was turning them away from, I wasn’t everyone’s favorite person, but they were super good natured about it. Right before I left, I handed off the hair tie I’d never gotten around to using to a woman having a hair emergency on the run. My list to take to volunteer at races now includes tissues, bandaids and hair ties LOL. 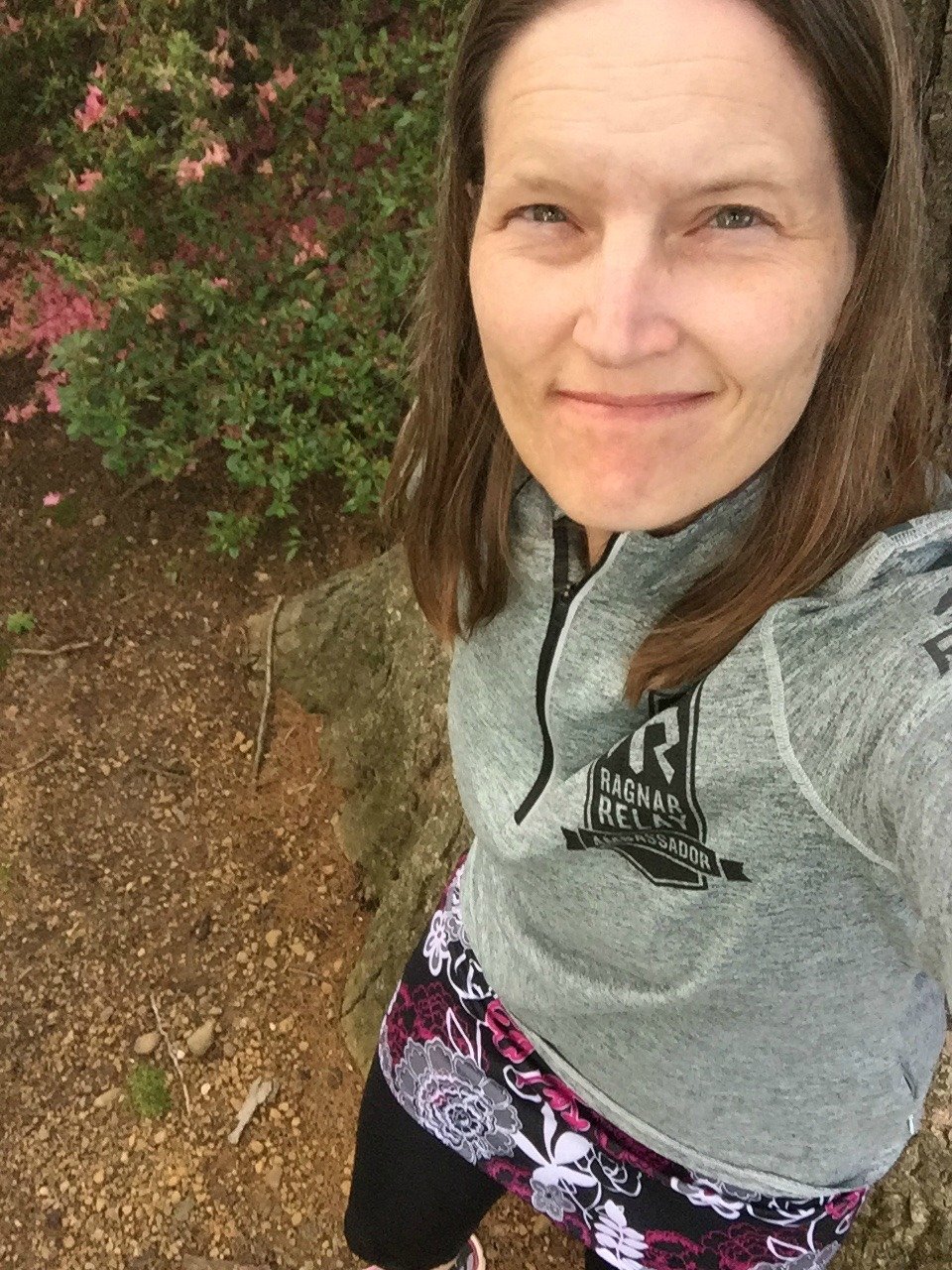 And you know what I got for volunteering (besides warm fuzzy feelings and lots of gratitude?) A

A race entry to the Alexandria Running Festival on May 28!

I can’t run it so I’m giving it away.  Want to run? Leave a comment indicating that you are interested before May 15 and I’ll choose a winner.

All in all, I had an absolute blast! And I know you are dieing to know – did I get bit by the triathlon bug now? Nope. Not at all. Not even a little bit. Phew.