You are here: Home / beer / Running and beer

That pretty much sums up my weekend…

Saturday was the 4th annual Barleywine Festival at Mad Fox Brewing.  Beer Geek and I shuffled the kids off to friends for the day/night and arrived as they were opening at 11:00am.  Yes, I started drinking at 11am.  The event offers 4oz pours for $3 each and there were 20+ beers to choose from in the first session. I’m just going to say that we tasted most of the beers in the first session and a decent number from the second session.

Sunday, I had an event at the Endurance Athletic Center with Moms Run This Town.  I also had a 6ish mile run on tap.  (No pun intended.)  The original plan was to run from our house to my car (’cause you KNOW I didn’t drive home on Saturday), since my car and the EAC were near each other.  Thankfully, another mom from near my house was going and gave me a ride.  Running there would not have been pretty, ahem.

EAC was awesome!  They have everything an injured runner could want: physical therapists, massage therapists, a podiatrist, a nutritionist, and an AlterG.  We started the day with a little boot camp for runners.  The drills and stretches were a bit challenging, but they totally targeted those muscles that runners need to target.  It became quickly apparent that my glutes and I need to become better acquainted. 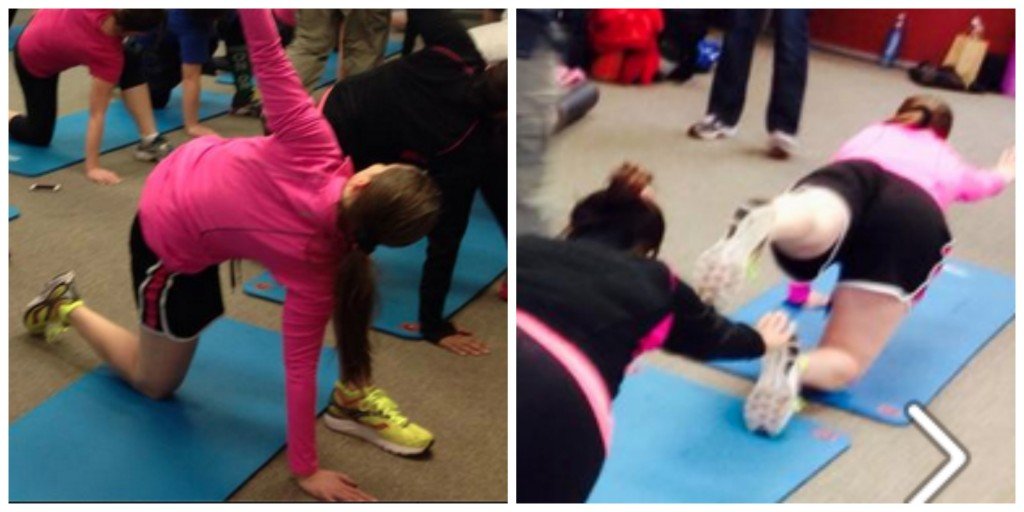 After the boot camp, the podiatrist gave us a little talk about running shoes and what to look for.  It was really refreshing to hear from a doctor who didn’t think any one shoe was perfect – that you just need to find the right combination of factors for your body.  I met with him separately at the end and he thinks my foot issue is likely Morton’s Neuroma.  I’ll be making a real appointment next week to hopefully figure out how to start the healing process, while still running.

Next their PT gave a little talk.  She was great and gave lots of advice on small changes you can make to help prevent injury in the first place.  I had the pleasure of being her guinea pig while she demonstrated that runners who do nothing but run often have weak gluteus medius muscles. (Mine are apparently weaker than a newborn baby, sigh, and thankfully, no one took a picture of that.) This muscle helps stabilize the pelvis and is what keeps your hips from dropping when you run.  Guess what I’ll be working on LOL.

Finally, Anne from Fannetastic Foods gave us some nutritional advice.  She shared with us what she felt were the five worst mistakes a runner could make.  The one I commit most often is the not eating on the run. Other than nuun, I pretty much take in nothing on my long runs.  Perhaps that explains why I’m always completely wiped afterwards. 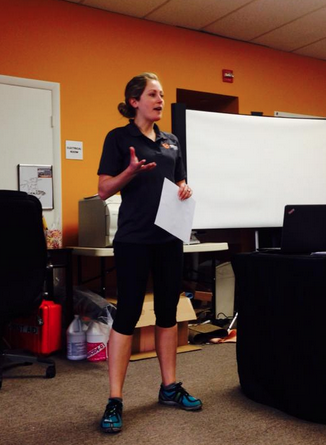 It was a really informative event and I’m looking forward to an actual appointment with the podiatrist.  Once I solve my foot problem, I really want to get a Running Analysis.  Perhaps I’ll ask for that as my birthday present this year.  Or maybe for our anniversary.  After all, isn’t that what’s listed as the appropriate gift for 19 years of marriage???

I rounded out my weekend with a little 6.7 mile jaunt around the neighborhood.  It was so beautiful out that I ran in a skirt and short sleeve shirt!  I got to try out my new Swirlgear shirt, my new Feetures socks, and a pair of Skechers shoes that one of my friends gave me.  Jury is still out on the shoes, but the socks and shirt were awesome!

What two words describe your weekend?  Was your weather as beautiful as ours?