First off, let me just say I have even more respect than before for those of you who have raced marathons (or really any races) on two consecutive days!

I already wrote my report of the Warner Fall Foliage Festival this weekend, but here are some pictures from the race. 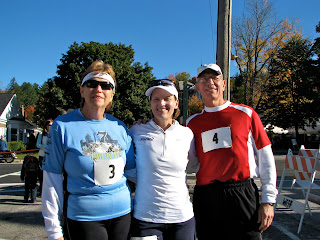 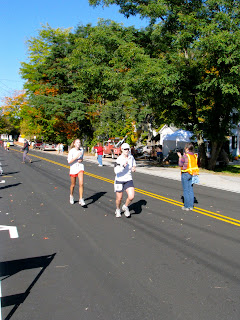 My incentive to run fast
(she was on my heels for the last .1 mile or so) 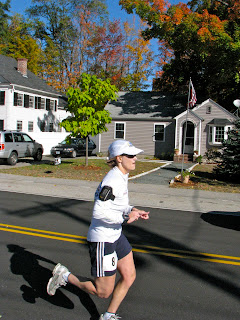 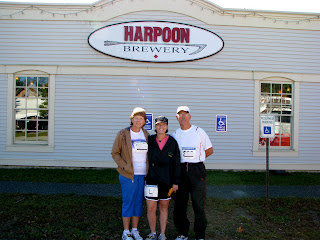 This race was the real reason we were in the area.  We found the NH race just so we could knock out two states, but we drove 10+ hours each way so we could run the Harpoon Brewery’s Octoberfest Race.  When I heard it was only 3.6 miles, I figured it was going to be an easy one for me.  I was wrong.  After I looked at the course elevation, I told my dad I was going to take it easy for the first mile and then pick it up at the end.  Why?  Because there was a 4% incline for a large part of the first mile and then an even steeper downhill at the end.  The first mile went as planned.  Due to the packed crowd of runners and running the uphill at a nice steady pace, we hit mile 1 around 9:30.  The second mile was a nice mix of up, down and flat and we came in around 8:30.  I expected mile 3 to be more of the same.  I was wrong.
Mile 3 started with flat and then went into a nice downhill.  The only problem with that was we were looping through a neighborhood and to get back to the main road, well, what went down had to go back up.  It actually was not a long uphill, but it was really steep.  No way was I walking that uphill, so I just took it at a nice steady pace.  I was feeling ok when I got to the top, but then started wheezing.  WTF?  I have plenty of issues when running, but this was a new one!  I told my dad to go on and I slowed down until I could get my breathing back to normal.  Mile 3 ended up being 9:03.    The last .6 mile had a small incline and then a huge downhill.  I picked up my pace as much as I could without actually rolling down the hill.  With less than a tenth of a mile to go, I thought I was going to puke, but convinced myself I could make it one more minute before I threw up. 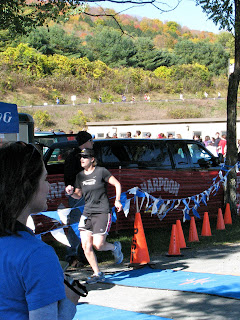 I ended up finishing with an average pace of about 8:52.  For the first time in my life, I nearly passed out after a race. I ended up lying down on my back on the grass for a few minutes until I caught my breath. Needless to say, I was a bit worried about what was going on with my breathing.

My breathing finally got back to normal and my dad and I picked up our commemorative mugs, grabbed a few brats, and then got back to the finish line in time to see my mom finish.  I have to say I’m incredibly proud of my mom.  She run/walks these races with us and manages to do them at a pretty darn impressive pace.   In fact, I can’t *walk* as fast as she walks!  Guess that’s why she often places in her age group.  I’m really enjoying our travels around the country doing races together.  I really hope before too long that one of the boys will decide that running is fun and join us.

Oh, and the breathing?  Well, Monday morning I woke up with the stuffy nose/cough/sore throat thing that Beer Geek and Jones had last week.  I’m guessing that coming down with that + cooler, drier air + hills = breathing issues.