Short story: I finished. It wasn’t my slowest day.

For the fourth race of the Dust Bowl Series, we ran in Lamar, CO.  Thanks to our decision to switch to a B&B, we had a yummy breakfast before the race instead of having to make a PB&J in the room.  It was also closer to the race start, so we didn’t head over until 6am.  (As an aside, three of the races were in central time and the last two were in mountain time.  I just stayed on central time, which means we went to sleep at 8:30pm mountain. I’m so time confused right now, it’s not even funny.)

It was chilly again, but not as bad as the previous day.  I opted for fewer layers on the bottom, but still wore my arm warmers and two pairs of gloves.  Thanks to running slow and the wind, I never took off a layer, although I did push my hat back (and look kind of goofy for the rest of the race.)  This route was a 3.something out and back that went on dirt, blacktop, and paved paths.  It was not as awesome as the previous day, but it was not bad.  The half marathoners had to do the out and back four times. 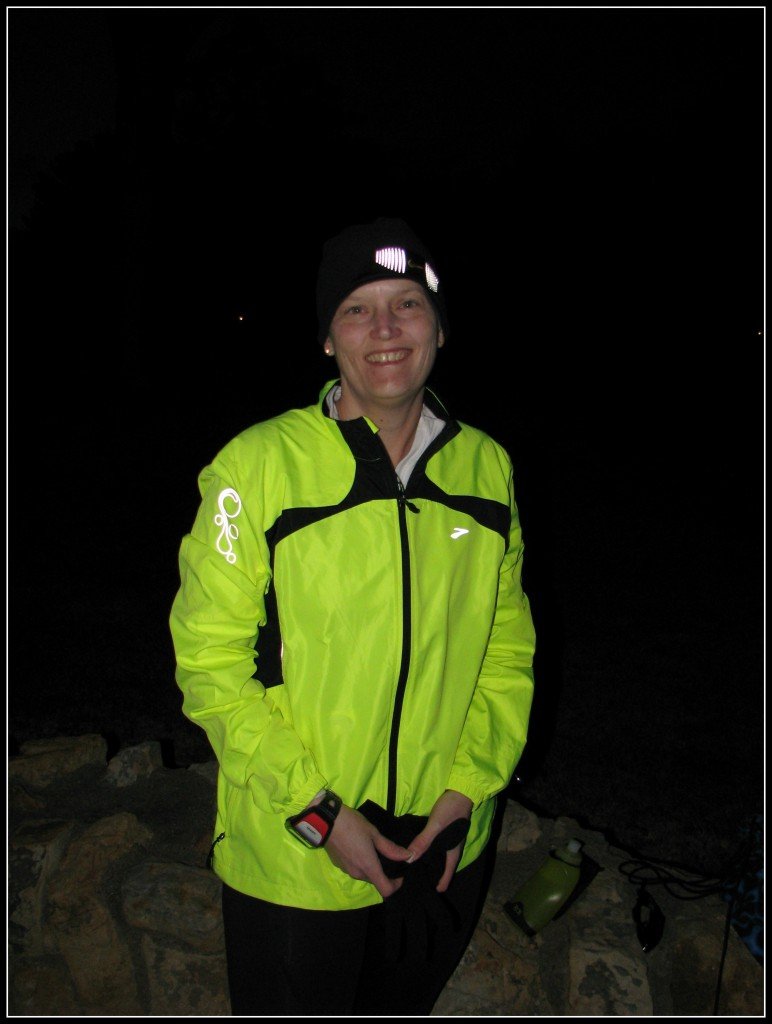 Yes, I realize I have almost the identical start picture for each race.  What can I say?  It was cold. It was dark.

The bottoms of my feet were killing me before this race.  I think my feet are just getting a bit tired and bruised.  The rest of me was just tired.  I gave myself permission to run as slowly as I wanted and walk whenever it made sense.  My first mile was slower than 12 minutes, so obviously I thought it was going to be a long, slow day.  I was wrong. 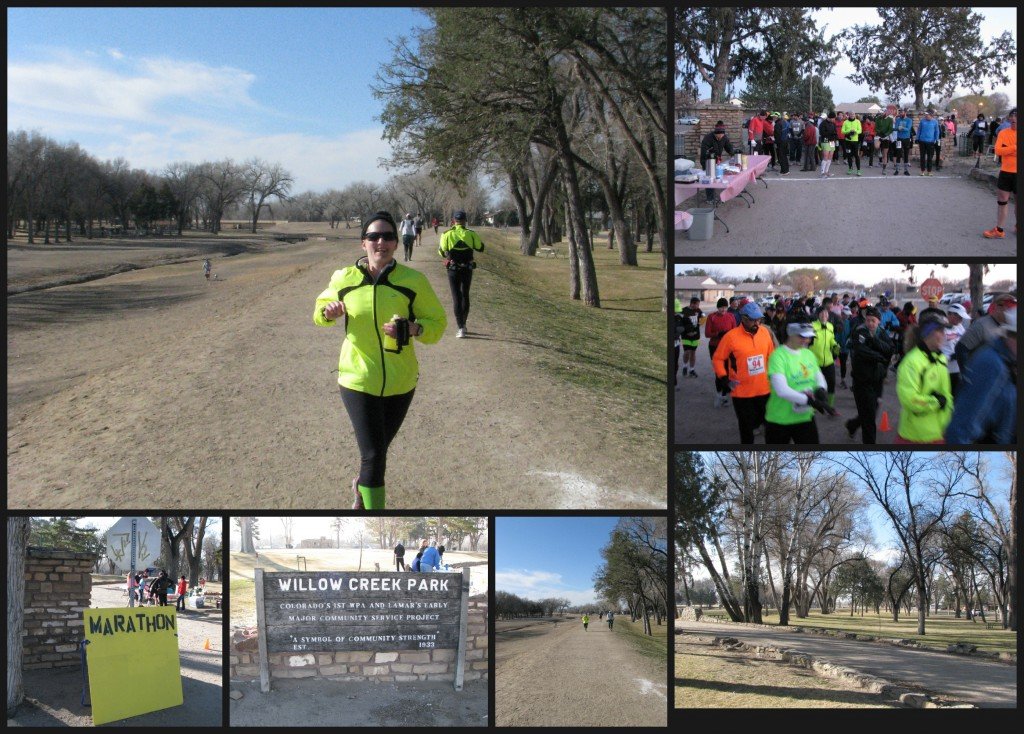 Once I got past the first mile, I started speeding up.  I just took it a mile at a time and piled up a few high 10s and low 11s.  I saw five deer run across the trail.  I said hi to bunches of construction workers.  I chatted with other runners.  But I didn’t walk.  Not once. (Exception: I always walk when I stop for gatorade, which I did four times in this half).  Finally, I got to a point where I only had 2 miles and 33ish minutes to hit my goal of 2:40.  I could have walked the last two miles and made my goal.  Instead, I just kept plugging along, one step at a time.  Finish time?  2:31! 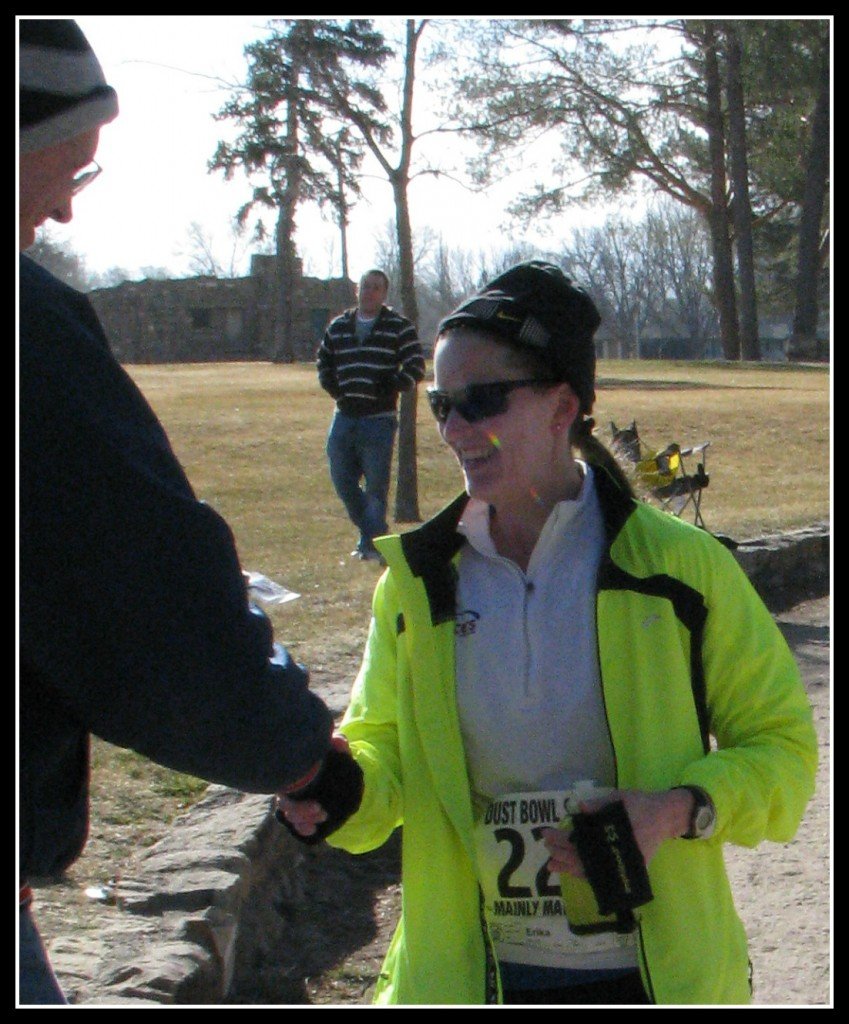 I was shocked at how well I did on tired legs and sore feet.  But, I just took it one step at a time and kept moving forward.

After a nice long soak in the clawfoot tub at the B&B and a lunch of leftover Thai food, I was ready to go.  Beer Geek had wanted to do a little (8 mile) hike to see a site, but I just didn’t have it in me.  Instead,we checked out a museum, stopped by some dinosaur tracks, and visited the corner where Oklahoma, Colorado, and New Mexico meet… 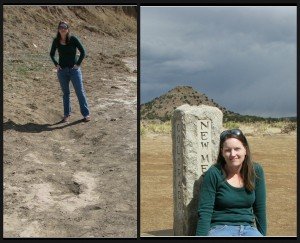 (Yes, those holes in front of me are dinosaur tracks…)

And you know how it’s called the Dust Bowl? Well, check out my running shoes from race 4! 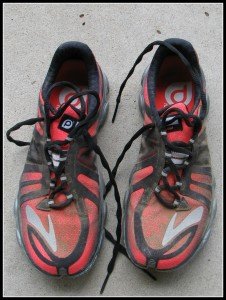 For the final race, I plan to leave it all out on the course.  Sadly, given how tired I am, leaving it all out there may mean walking most of it LOL.  Guess we’ll see what I have left… 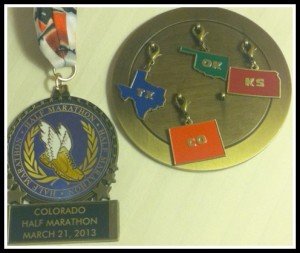