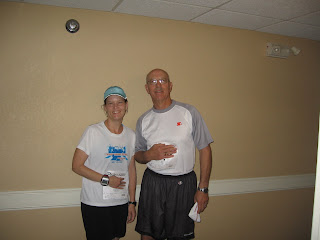 At the hotel before the race

Today dawned warm and humid in Wisconsin and just kept getting more so. Dad and I walked over to the race start at about 7:30 am. Neither of us had gotten a great night’s sleep and we’d been up for a while. With the heat and the sun, it felt more like we were starting the run at mid-day. Not what I’d call a good sign.

Mile 1 was ok, with a fair amount of downhill, but by mile 2, I was already feeling the heat. The course turned out to be a bunch of long slow inclines (which I HATE) and not a whole lot of shade for big chunks of it. There were plenty of water stops and locals with hoses and sprinklers, but I should have taken my fuel belt with gatorade. Dad kept me on pace and we managed to finish the first five miles at our goal speed of 9:30/mile.

That’s when the wheels started to fall off the wagon. I don’t deal well with drinking too much plain water when I’m hot. I took a gu at mile 5 and it helped a little, but I started to feel sick to my stomach. I was pretty convinced at the end of mile 7 that I was going to need to throw up. We ended up walking two big chunks in mile 8. Finally, by the beginning of mile 9, I had pulled it together. My dad was doing better than me and kept me moving (remember that mental strenght I mentioned. Yeah, he definitely had it today when I was falling apart).

As we approached the finish line (after two wicked uphill sections), a woman started to pass me. She and I had hopscotched the entire race. No way was I going to let her finish first, so I put everything I had into the last .1 mile and sprinted to the finish. Dad was caught a bit off guard, but quickly picked up his pace and stuck with me. We chicked and old guyed a fair number of people in that last bit as no one was really racing in. Our final time was 1:39 and change (beat the girl by 2 seconds) and I came in ahead of my dad only because it wasn’t chip timed and he pushed me ahead of him as we went down the finisher’s shoot. 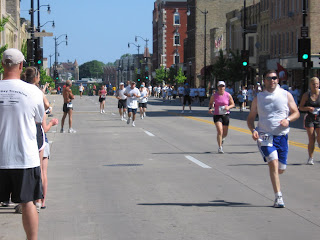 On the final straight away (we are in the middle, on either side of the guy in the white shirt) 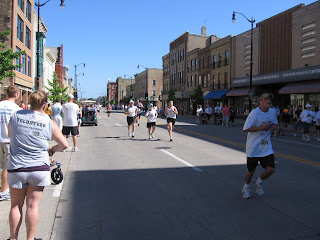 Running full out, refusing to let the chick on my left (on the right in the picture) finish ahead of me.

The race was well run, with plenty of water, but I’d have happily paid more for gatorade at the stops. Usually this race is chilly, so I was quite impressed that only one of the 8+ water stops ran out of water. Unfortunately, the only sighting we had of the lighthouse was around mile 2, rather than when were actually fairly close to it at mile 5. Overall, despite feeling like I was running in hell and breathing water, I had a good time doing this race with my dad.