You are here: Home / travel / State #7: A 10K PR!
Short story: Today’s race was awesome and I finished in 54:49 according to Garmin (no official results yet). Settle back with a beer, the rest of the story is pretty long.
Pre-race:
We left DC at 7 am on Friday morning. We had decided to go the western route, rather than I-95. Travel went great for the first 5 hours. Then we started hitting rain and there was an accident that had us sitting in traffic, barely moving, for more than an hour. By the time we got to Hartford, the boys were squirrelly and we were exhausted. Unfortunately, our hotel didn’t have a pool, so the boys had to settle for ottoman races down the corridor in our suite. Thank goodness we had dinner plans with a blog friend of Beer Geek’s at the City Steam Brewpub. Through a miscommunication with the waitress, we ended up leaving with two growlers. YUM!
The perfect after dinner treat: Porter and M&Ms 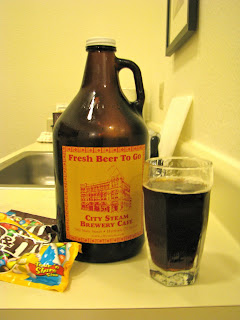 Saturday, we headed east from Hartford. We knew that traffic was supposed to be a nightmare once you got into Maine, but we started having horrid traffic on 495 near Boston. After going 10 miles in two hours, we bailed. We headed north through New Hampshire on backroads and ended up pulling up at our house after almost 9 hours of driving (google says it should take 5!) I’m not sure we saved any time by driving the way we did, but it was certainly less stressful than sitting in traffic. Once we got to Rockland, we headed to the Maine Lobster Festival, where mommy and daddy got lobster rolls and the boys got to ride a couple of rides and look around the harbor. I picked up my race packet and then we headed back to the house we’ve rented, where I had another glass of yummy porter. I highly recommend lobster rolls and good beer for fueling!
Race day: I woke up this morning to a cool, foggy day. Excellent! Despite some tummy issues, I got out the door on time and was able to park near the start of the race. With only about 250 runners, the start consisted of a line on the ground and a woman yelling “ready, set, go”.
My stomach continued to bother me for the first mile or so, but I was planning on negative splits, so I was running fairly easy. The first three miles ticked off right on target : 8:43, 8:50, 8:48. I was barely sweating and not really breathing hard. I saw Beer Geek and the boys at the 5k mark. 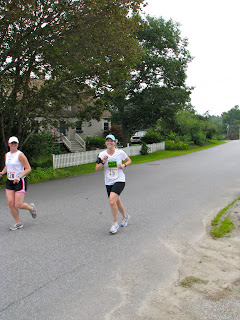 Right after the 5k mark, we hit a few inclines. I let them slow me down more than I’d hoped, but still managed two decent miles: 8:59 and 9:02. With 1.2 miles, I knew I’d likely PR, so I picked up the speed as much as I could and did mile 6 in 8:22, followed by a flatout sprint for the remaining .2. I ended up finishing all by myself, so I didn’t have chance to pass anyone, but since I was the only one finishing at that point, I had a lot of spectators cheering for me as I raced to the end. I handed off my bib tag (no chips here) and looked at Garmin to find nearly a minute PR with 54:49!
I really enjoyed this race. It was small, but extremely well organized. They didn’t close down most of the roads completely, but the volunteers did a wonderful job of keeping cars stopped and getting us through stoplights and across streets. I highly recommend this race for anyone who wants to run in Maine and doesn’t get into the Beach to Beacon. It’s probably not as scenic, but I enjoyed the views and the terrain and had a wonderful time!

After the race, we took the boys out to the Rockland Breakwater Lighthouse. To get to it, you have to walk on a 7/8ths of a mile long breakwater. Shoo did a fabulous job walking all the way out and then up the lighthouse steps. 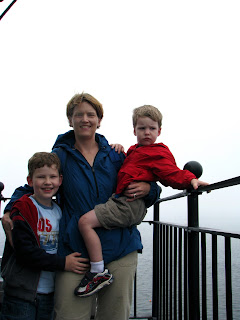 Then, in the way of 3 year olds, he suddenly needed to pee (there’s no potty option out there), so I got to carry him back as fast as I could walk. Thankfully, I’d taken my ergo carrier with me, so at least he was on my back and not in my arms.

Now, I think I deserve the growler of City Steam Dark Lager we have left…