You are here: Home / beer / Taking one for the team

As I mentioned yesterday, today we headed down to Fredericksburg to visit the Blue and Gray brewery. It’s only about an hour away and traffic was kind to us on the way down, so we got there bright and early. A kindly gentleman gave us some tastes of their yummy beer and then took us on a tour of the very small brewery.

Here I am with the Brew Kettle. 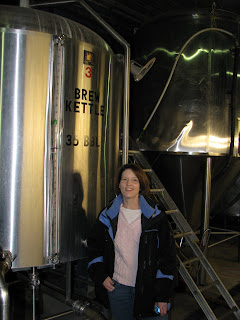 Towards the end of the tour, we got to taste the lager, the pale ale and the stout from the actual beer tanks. All very good, but not yet carbonated and ready for kegging. Then we got to taste their special version of the stout – after coming out of the tanks, it was aged in bourbon barrels that were used to make Virginia Gentleman. OMG! I could have sat there all day and drunk that. Unfortunately, they no longer had the special stout for purchase, so we ended up buying a lager (for the beer basket I’m creating) and two bottles of their regular stout for us.

The tour guide pointed us in the direction of Capital Ale House for lunch. Oh.My.Goodness! We have access to the Brickskeller here, but this was just amazing. The number of good beers on tap was phenomenol. Beer Geek offered to drive home, so I had a Left Hand Smokejumper with my lunch. With 10ish % alcohol, driving would not be an option for me. Our waiter quickly figured out our weak points and convinced us to try another beer as well. Because Beer Geek was driving, we agreed I’d drink most of the second beer. Here I am about halfway through that 10.5% alcohol beer. 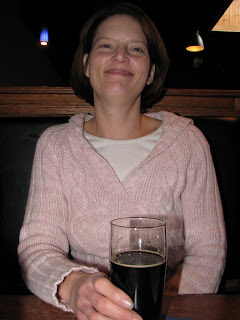 It was Jefferson’s Reserve Bourbon Barrel Stout from Bluegrass Brewing. YUMMY beer with an aftertaste like the cookie part of an oreo cookie. We definitely want to hit this restaurant again. Fredericksburg is the location of one of the half marathons I’m signed up for. If I can’t get rid of my bib, we may make a weekend of it and just assume I’ll be running the half a bit hung over.

The drive home was less than fun, with stop and go traffic most of the way. Gotta love I-95. Even better was the ridiculous directions our new Nuvi gave us. Beer Geek’s alternative nickname is Map Boy, so being told to go completely out of our way to get somewhere did not go over well with him. At one point, Nuvi was yelling “recalculating, recalculating, recalculating” at him. I think we may need to take her behind the barn and beat some sense into her.

I had a short easy run penciled in for the day, but I think a short easy nap is more likely. Not sure that Jones and Shoo will agree to that though, sigh.