1.  I’m having a bit of a crisis of confidence. I’ve run four days in a row and my legs are feeling pretty trashed.  I was pleasantly surprised on my Wednesday run that my speed wasn’t bad.  I did find that my heart rate went up when I had to race a few lights and didn’t want to come back down.  I’m planning to run this afternoon and that will be the first time in ages I’ve run five days in a row.  And I’m seriously feeling it.  I’ve trained for marathons, so I KNOW my body will get used to this and that my endurance will improve, but somehow it’s hard to BELIEVE that it’s actually going to happen.

2.  Yesterday I had a bit of a “Goldilocks” moment.  We picked up Jones’ new bike from Performance.  It’s a Schwinn that’s a bit higher end than the ToyRUs bikes. I was thinking I’d buy the same bike in the next size up frame.  I mean, it’s a decent enough bike and fairly reasonably priced.  Then I tried one of their GT women’s mountain bikes and thought “oh, this is bettter.”  Again, still a reasonable option.  And then I went to another bike store to pick up Beer Geek’s bike.  And I got fitted for a Trek 7.2. Oh, my.  I’m pretty sure I’ll be buying that in the next week or so.  (And I won’t be trying any more expensive bikes because I’m afraid I’ll just keep finding better and better and I don’t need to spend $1000 or more on a bike to ride my kids to school LOL).  Amusingly, it’s the same bike as Beer Geek has, only a whole lot shorter. ;o) 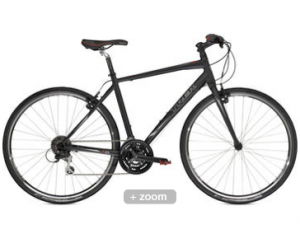 3. I made a useful discovery yesterday.  After my run, I was running a bit late (when am I not?)  I considered heading out the door in my sweaty run stuff, but I figured if *I* could smell myself, no one would appreciate my on time arrival.  So, I stripped, showered, and threw on clean clothes – in 5 minutes.  Apparently, if I skip washing my hair (thank God for ponytails) and don’t put on makeup, I can at least be clean quickly.  I’m just going to say “you’re welcome” to all who encountered me yesterday.

Bonus:  What’s a Thursday without a beer? 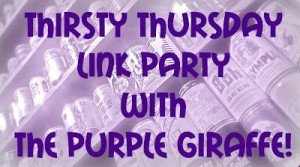 This week’s beer is one of my favorites.  It’s not one of my usual styles AKA dark, sweet and heavy, but a much more “girly” beer.

Raspberry Tart is brewed by New Glarus Brewing in New Glarus, WI.  It’s a cute little brewery with a number of yummy beers that they do NOT distribute outside of Wisconsin.  Thankfully, my parents bring me some occasionally and we get it when we go home to visit.  I forgot to take a picture and sadly just discovered that was our last bottle.  Cue sad face.

Raspberry Tart is an American Style Framboise.  It’s fruity and a little bit tart and goes down super easy (good thing it’s only 4% alcohol.)  I enjoyed mine in a wine glass (a champagne flute would be better) with a piece of rocky road fudge.  It was a good combination, but I’d recommend a darker chocolate as a better pairing.