You are here: Home / 5 in 5 / Tips for surviving multi day race events

Multi-day race events are becoming increasingly popular. They range from high mileage multiple day races like the Mainly Marathons races and Disney’s Dopey to two day lower mileage options like the Frederick Nut Job (5k/half marathon) and the Shamrock marathon’s Dolphin and Whale challenges (8k/half or full marathon). Since I’ve now run 5 half marathons in 5 days at both the Riverboat Series and the Dust Bowl series and two marathons in a row at the Independence Series, plus the Nut Job, I feel like I’ve learned a few useful things along the way.  So, for my free Friday participation with Cynthia, Courtney, and Mar, here are my tips. 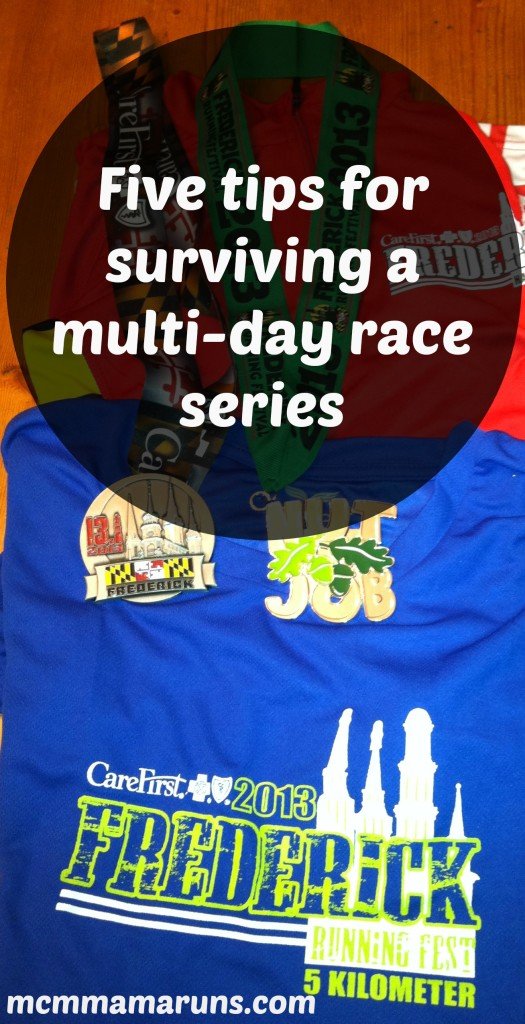 1. Plan an appropriate training plan. I know I’m the queen of racing undertrained, but when you are running multiple races in a short amount of time, it’s harder to get away with that.  So find or create a plan that includes at least a few weeks that mimic your eventual races.  Obviously your mileage will be lower than the races, but running 2-7 days in a row (depending on your races) in training a few times will give you some hints on how your body will respond.

2. Bring at least two pairs of shoes. You should have been rotating your shoes between runs anyways, but this is particularly important for multi-day series. There’s always a chance that weather will render one pair useless, plus it’s good to let each pair rebound for a day before using again.  I find that it also helps to wear two styles or brands of shoes if you can. For me, this makes me use my muscles in different ways and I end up not as sore.

3. Focus on recovery between the races. Practice what works for you beforehand and have it with you. For me, the magic formula is chocolate milk, epsom salt baths, and compression socks.  (The added massage between my two full marathons definitely helped as well.)

4. Focus on fueling between races. Don’t go crazy, but do make sure you eat enough. Get a snack that includes protein right after each race and then make sure you have a nice meal at each meal time between. Personally, I find a deli sandwich (OK, I eat a Subway sub after most races) has a nice combination of carbs, protein, and salt, but you know your own body.  Just don’t overeat and don’t eat a super rich or heavy meal.

5. Plan on having fun. For most of us, multi-day races are not the place to run our fastest races. (I broke this rule when I ran Nut Job.) Choose one race to really push yourself (for me that’s always the last race) and take your time on the others. The last thing you want to do is push so hard on an early race that you are too sore to race again.

Multi-day races can be a lot of fun and they usually bring a lot of bling, but they can also be a recipe for injury if you aren’t smart about it. My superpower is quick recovery LOL, but I think that most people could race on multiple days if they train right and race smart.

[Tweet “Want to enjoy a multi-day race ALA @runDisney’s Dopey or @ShamrockOn’s Dolphin? Here are some tips!”]

Have you ever done two races in two days (or more)? What did you think? Got any great tips?

If you are local, don’t forget to enter the giveaway for two free entries in the Fit Foodie 5k!