You are here: Home / travel / Tourists in our own town: National Aquarium

This past weekend, I mostly unplugged. Admittedly, I deleted all the unimportant emails I got (probably 90% of those I received, sigh) and spent a few minutes on Facebook after my kids went to bed, but I was barely on electronics and most of the time I was, I was reading the second two books from “The Evil Trilogy“. Surprisingly, I didn’t miss my usual time on the computer.  Maybe I need to do that more often…

Anyways, week before last, the boys and I went to the National Aquarium in Baltimore.  It’s only an hour away if you leave after rush hour and return by 3:00.  It seems so much further away, but really it’s pretty close.  (The problem with DC is that a small accident or poorly timed departure can turn an hour drive into multiple hours of driving.)

It was pretty much awesome.  In fact, if it were closer, I bet we’d go all the time.  As it was, I opted to buy a family membership.  (Tip: if you have a big family, kids over 11, or are pretty sure you’ll go more than once in a year, the membership is totally worth it.)

We got in quickly (members don’t have to enter at specific times – a plus right there) and first went to one of the 4D movies – Salmon Run.  I’m not going to ruin it for you, but let me just say I’m not a huge fan of 4D.  After that we hit the dolphin show and then finally we actually walked the exhibits. 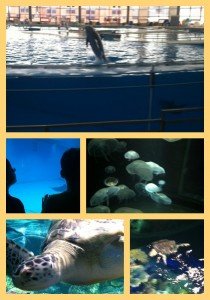 The Baltimore Aquarium has an interesting set up.  You ride moving sidewalks and escalators up and around, eventually reaching the top.  On the way up, there are exhibits at each level, plus you can look down at BlackTip Reef which makes up the middle.  Once you’ve reached the top, you then wind your way down on a ramp surrounded by a big tank.  It’s really a neat place!  (The only negatives are parking nearby is expensive and you can’t bring a stroller if you have small children, which is a big part of the reason we hadn’t gone since I was pregnant with Shoo.)  All in all, a good way to spend a day.

Just for the record, no running here.  I tweaked my calf again, so I’m fitting in whatever cross training I can until I can get into my chiro. Fun. Not.