I didn’t really run last week.  I’m not even sure what I did.  It was kind of a blur of car buying, insurance fighting, kid wrangling, and job juggling.  I just know that by Friday I was wrapped so tight, I thought I was going to shatter.

Finally, I went for a run on Saturday.  Then I went for my birthday run on Sunday.

While I feel like I’ve got a bit more of a grip on things, I’m still struggling.

Since I couldn’t resolve any of the things that needed resolving and I refused to do any paid work on my birthday, I opted to begin planning my fall races and doing some of the logistic stuff for the Riverboat Series.

I think if I actually sign up for some races, I will be motivated to actually train for them, right?

September 28 – Clarendon Day – I think this year I’ll do the 5K+10K option.  You run down the hill (5K) then have to get back up the hill then run down and around for the 10K.  It would be a good training run for my first half of the fall.

November 10 – Virginia Running Festival (this one is VERY tentative)

I need to find a couple of backup races just in case, but I plan to register for Potomac River and Richmond this week.  Bonus points for those two because I won’t have to get a hotel.  Baltimore signup will have to wait until I at least manage an 8-10 mile run, as I may not be ready.

I have a goal in 2014:  I plan to hit Venus.    Yes, I’m apparently not happy enough with being on Earth.  No idea what I’m talking about?  I’m talking about being a Half Fanatic.  To hit Venus, I need to run 13 half marathons in 79 days.  (If you clicked over there, know that some day, I will be shooting for the Sun.  Just sayin’)

The key piece of that?  5 halves in 5 days as part of the Riverboat Series.  And what’s 8 more in two months when you’ve done that?

To add to the fun?  We may drive to the Series.  As Beer Geek said, “Just think of all the counties we’ll hit…”

I may have hurt myself rolling my eyes, but I shouldn’t complain.  After all, it’s his county counting that’s getting me all over the country to run races… 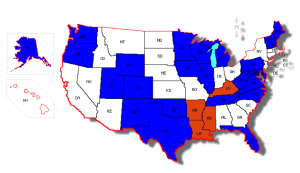