You are here: Home / Recipes / TTT: Ambassador, Pinterest, and MCM

1.  I found out yesterday that I’ve been chosen to be a 2012 Ambassador for Pacers Running Store.  This is my third year as part of the group and I absolutely love it.  Before I became an ambassador, I was a huge fan of their store and the many races that they put on each year, so it’s been awesome being more involved.  I’ll be volunteering at a lot of the races and definitely running as many as I can.  If you are a local, look for me at the races!

2. Lately, I’ve been addicted to pinning recipes on Pinterest, but I haven’t actually done anything with any of them.  Well, last night I actually made one of the recipes (but, of course, I didn’t follow it exactly because, well, I never do LOL.)  I made “Dark Chocolate Avocado Mousse” that I found on the Peanut Butter Fingers blog.  Oh my!  It was awesome!  I added less chocolate and less honey than suggested, but it was still good.  Then I added some vanilla coconut milk and dipped in some strawberries.  I think I’m in love.  (FWIW, the kid who doesn’t like avocado didn’t like it.  The kid who loves avocado was mad I didn’t make more.  I think if I increase the chocolate to that in the actual recipe, I could change the non-liker’s mind.) 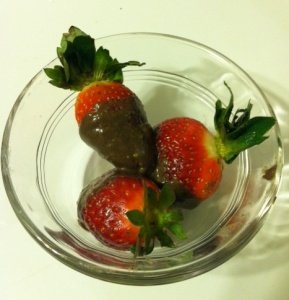 3.  Yesterday, registration opened for the Marine Corps Marathon.  As happens every year, it sang a siren call to me.  Timing would suck for me to run it this year, but I very nearly went over and signed up.  Luckily for me it sold out in just a few hours.  I’m pretty sure I’m the only runner out there that was happy it sold out quickly.  ;o)

Bonus:  The last couple of days my left glute and upper hamstring have been sore.  It feels like I’ve finally got them working when I run. What I can’t figure out is if just the left side is working and the right is being lazy or if now both sides are working.  Sort of gives a whole new meaning to half-assed…

Ok, let’s be honest, the meetup may be virtual, but the coffee is absolutely not. I’m pretty sure I would not survive without coffee to start my day. I’m joining Deb and Coco for a virtual meetup – some day I’ll get to meet up for real with people again. If we were having coffee, […]