You are here: Home / Ramblings / TTT: Confidence, consistency, and connections

1.  Confidence – One of the best things I got out of the recent Blue Ridge Half Marathon is confidence.  I’ve been questioning my ability to run far.  I’ve been convinced I can never run fast again.  I honestly wasn’t really sure I could even finish the race (and this was before I saw that big ass hill!)  While it was far from a speedy half marathon, it was a really good time, considering where I am in my training and what the course was like.  McMillan says I could run a 2:06 half based on my recent 5k time (my 4 miler and 8k fall in line with this as well).  And, based on my performance, I think McMillan is right.  Without a mountain in the middle and with a few extra long runs to strengthen my feet, I do believe I could run a much faster half.  And I will.  Maybe not this spring.  But it will happen again. 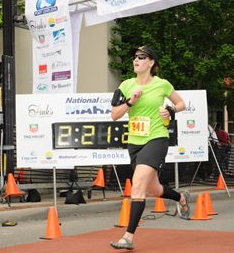 Almost a heel strike… Yeah, I was tired…

2.  Consistency – Yesterday I went to a yoga class again at Mind the Mat.  Every time I go, l am reminded how good it makes my body feel. Unfortunately, yoga takes more time than running (I have to drive there, class is longer than most of my runs, and then I have to drive home…), so it’s the first thing I drop off my plate when I start running out of time.  Yet every time I go, it strengthens parts of me that would aid in my running.    Having a stronger core would have really helped me on the downhill this weekend (and we won’t talk about the fact that bathing suit season is upon us).  But I can’t seem to consistently attend.  I have two months before my kids get out of school.  It’s time to consistently head to yoga class at least once a week.  I want to see how my body performs if I actually make a concerted effort to strengthen it.

3.  Connections – I started this blog because Beer Geek was tired of hearing about my training for the Marine Corps Marathon in 2008.  In fact, he pretty much told me to start it and gave me the name.  Voila! MCM Mama was born.  I am now approaching 4 years and about 1000 posts (numbers are squishy ’cause I lost some early stuff when I moved to WordPress.)  I’m not one of the biggest running blogs around, but I’ve still gotten so much more out of this blog than I ever imagined.  The most important thing I’ve gotten though is *YOU*, my reader.  I’ve gotten so much good advice, gotten to run with so many awesome people, and gotten to drink a beer with a few others.  So, as I approach 1000 posts and 4 years (boy, that calls for a giveaway), I just wanted to say thank you for coming here and being part of  my babbling.