This is what my yard looked like on Thursday night… 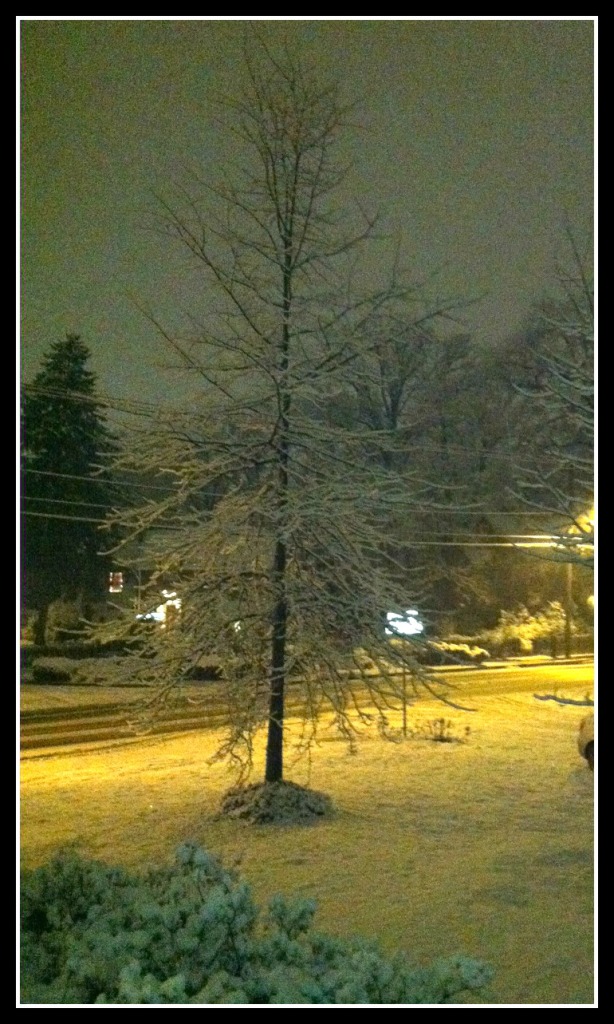 I know that doesn’t seem like much to my northern friends, but it was enough to shut schools on Friday.  It was also enough to keep me from running my long run outside. Why?  Because Virginia snow is deceptive.  We usually hover just around the freezing mark, which means a lot of black ice and snow covered ice.  Add in a complete lack of treatment on many of the neighborhood roads and it equals a really good chance of falling on one’s rear.  If you are lucky, all you hurt is your pride.  I opted for 5 miles of speed work on the treadmill in lieu of a 6 mile easy run.

Saturday was cold, windy, and many roads were still treacherous.  Trails were also fairly well ice and snow covered.  I do have Yak Trax, but since I’ve never run more than I few miles in them, I was hesitant to try 12.  Besides, I hadn’t taken a rest day since Thanksgiving and my body was pretty ready.  I opted for the 7 minute New York Times workout + upper body weights.

Which meant Sunday was long run time.  The trails were still questionable.  It was raining when I got up.  It was grey and just uninviting. But there was no way on earth I was doing 12 miles on the treadmill.  (I run shoeless on the mill and I’m pretty sure my feet couldn’t do it. 6 seems to be my limit.) I honestly thought I was going to be missing my long run.

One of the ladies I’ve become friends with through there was looking for someone to accompany her on her longest run in years.  She runs using the Galloway method.  Since the whole point was to run with company, that meant I would run/walk with her.  I’ve never done an entire run that way, so I was interested to see what it would feel like.

Verdict:  I didn’t mind it.

I didn’t love it and decide that’s how I’ll start running, but I didn’t dislike it either.  I was never really out of breath, my heart rate stayed low, and my problematic foot never hurt.  Our pace was about a minute per mile slower than I usually run a long run, but it wasn’t much outside the range of paces McMillan recommends for training.  I was tired at the end, but more from being outside, the hills (oh, the hills!) and the tricky footing than from the actual mileage.  In fact, I’m positive I could have run a few more miles.  I can absolutely see why people train that way.  In a way, it’s a nice balance to the speedier short runs I’ve been doing with the Thursday group I run with.  So, overall, it was a win! I expect I’ll run at least a few more long runs that way, if only for the fact that it was awesome to have company.

Have you ever tried the Galloway method?  What do you think of it?