It’s Tuesday, so that means it’s time for Tuesdays on the Run. Since today is a “free topic” day, I’m going to share my final race report from my trip to Mercury with Half Fanatics. 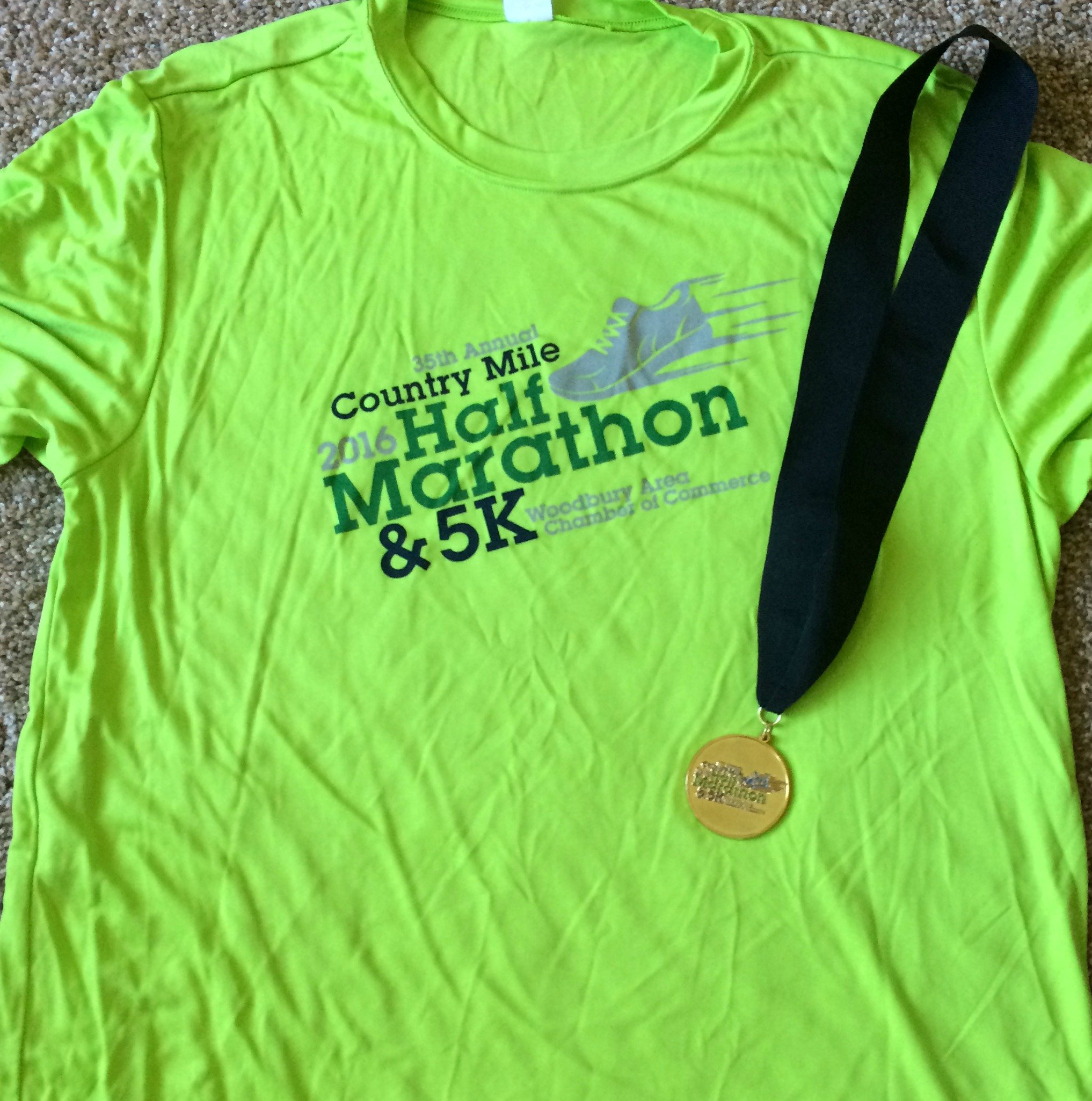 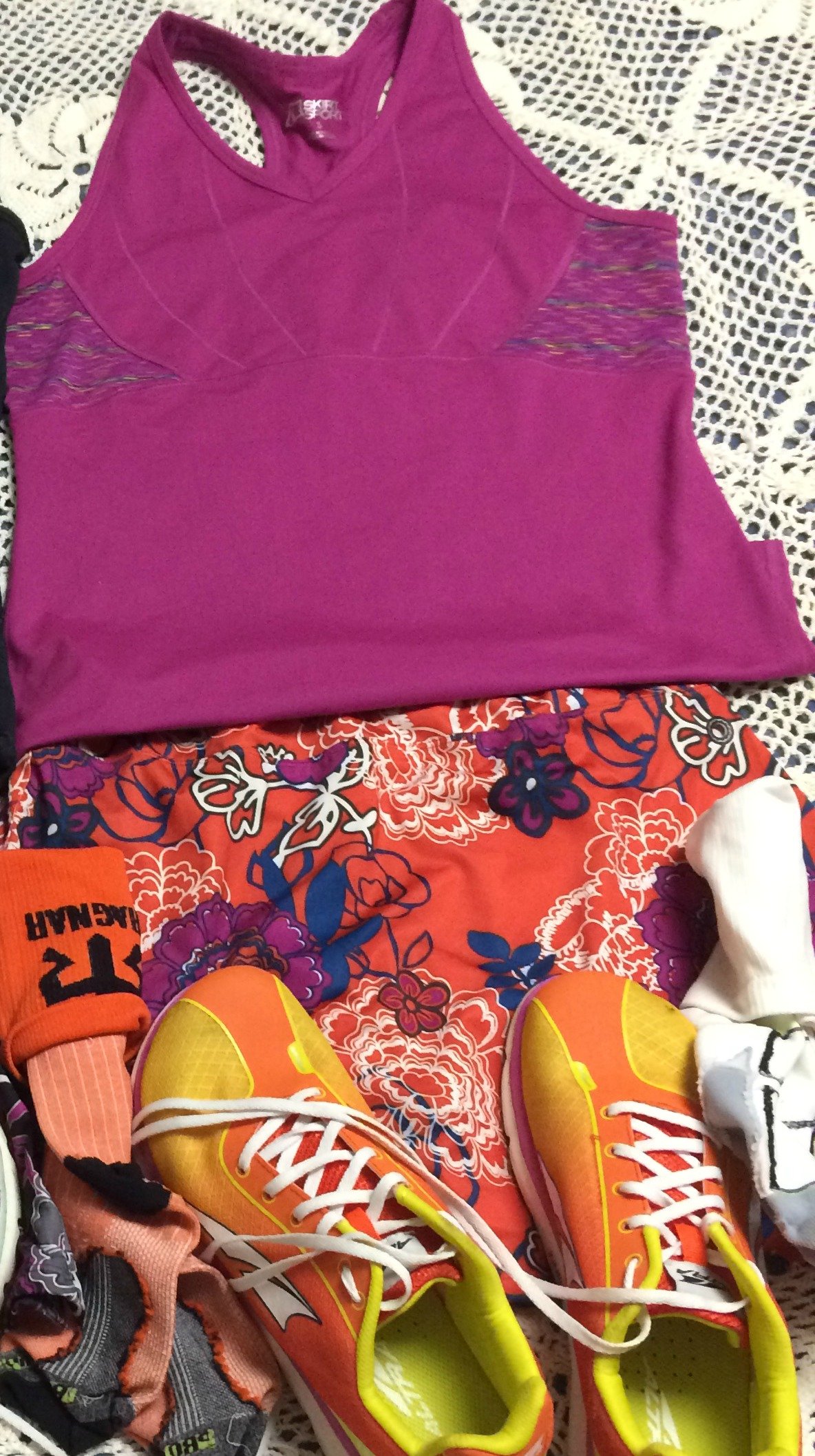 After I left the half marathon in Wausau, I drove 2.5 hours to Woodbury MN. Packet pickup was in the local YMCA and literally took 2 minutes. I knew absolutely nothing about the course, but I knew I was in for a small race and prepared to run the race mostly by myself. After packet pickup, I headed to a college friend’s house. He was a fraternity brother of Beer Geek’s and I hadn’t seen him in at least 20 years (thank God for Facebook LOL). He and I checked out the local science museum and then had Mongolian barbecue for dinner. I hadn’t had that in ages and it was so so good. I then crashed in their spare bedroom to try and get some sleep. Unfortunately, it was one of my typical nights of waking every 20 minutes in a panic about whether I’d missed my alarm.

I woke early the next morning, ate a couple of donuts that I’d picked up at the Quik Trip, and headed to the race. The drive over was uneventful, parking was plentiful, and the morning was perfect for a run. I was actually just the tiniest bit chilly. Woo hoo! 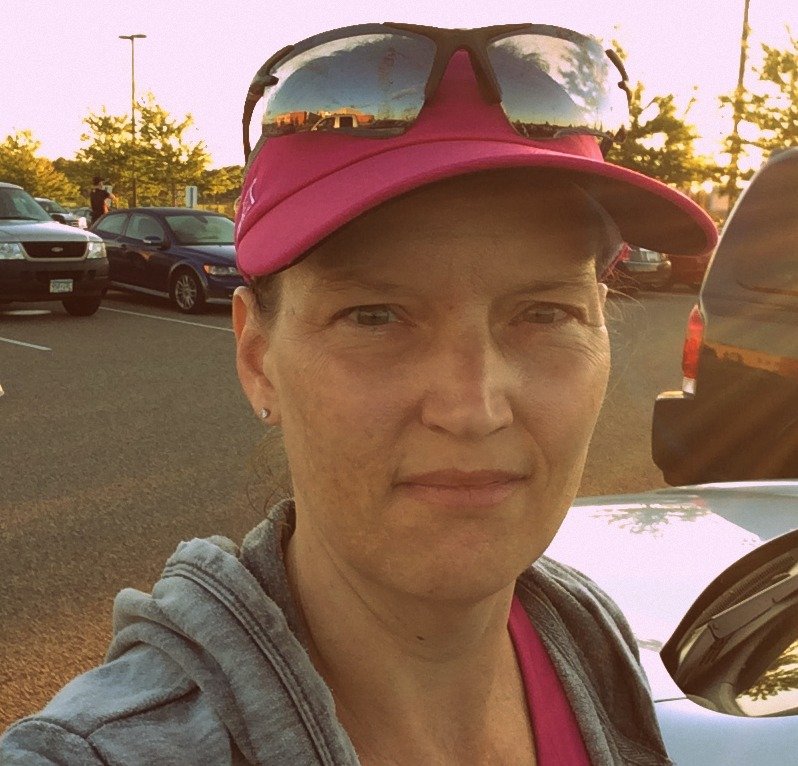 As we lined up to start, I noticed a 2:20 pacer. I wasn’t sure I could run that fast after a race the previous day, but I decided to try to stick with her as long as I could. There was a group of about 6 of us with her and we all chatted as we ran along. At one point, we went down a long hill and I saw that the mile 11 sign was right at the bottom. Ugh, we were going to have to go back up it.

The rest of the course was slightly rolling hills on paths around a couple of small lakes. The course was gorgeous and I really enjoyed talking with the pacer and the locals who were running with us. I had a goal of sticking with the pacer until Mile 7, but somehow I managed to stay with the group until we hit mile 11 and that big hill. At that point, my quads reminded me that they’d already run 24 miles and that they were going to walk the hill, thank you very much.

So, I walked the hill and then did a run/walk for the remaining distance. I was really tired by this point, but excited to know that I was almost to the finish of my trip to Mercury.  As I came around the corner, I could see the finish line on the high school track. At this point, I had very little left in me, so I just trotted into the finish line. I’ll admit that if felt kind of anticlimactic after all the races I’d done. 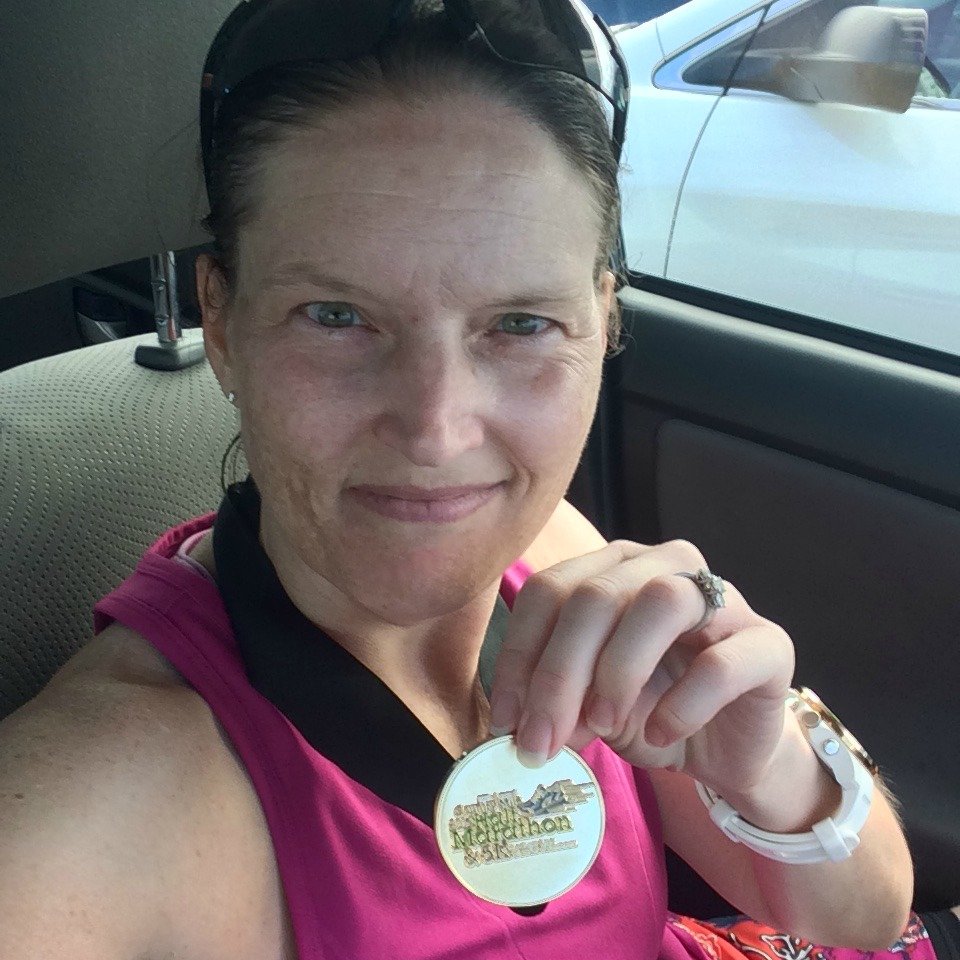 As I walked away from the finish, I noticed another woman in Skirt Sports. Turns out she was an ambassador as well and I’m embarrassed to admit I had completely forgotten that I had talked to her about the race. But it was still cool to meet her at the end. 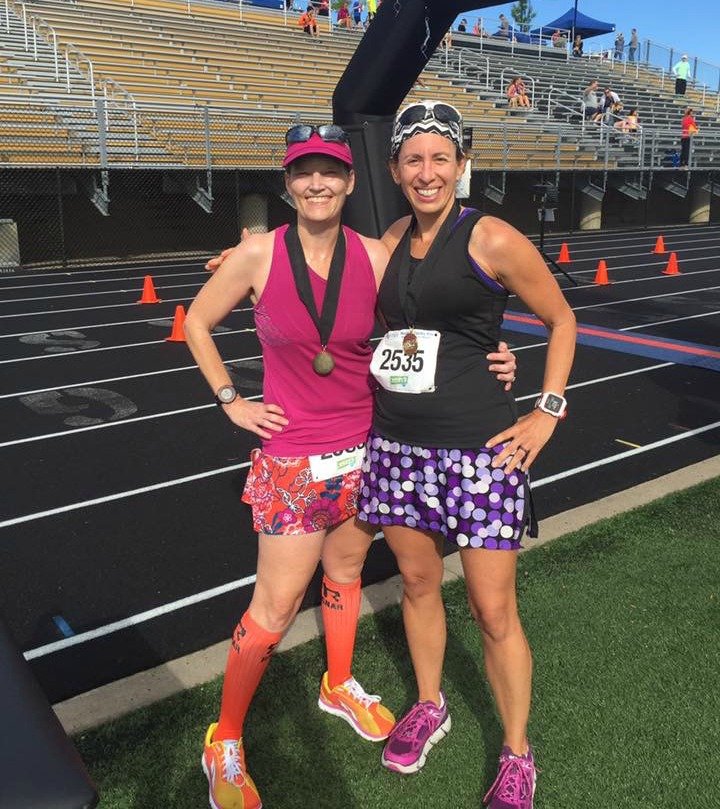 Would I run the Woodbury Country Mile again?

I’d run this race every year if it was a local race. It was inexpensive, the course was beautiful, and it was my favorite kind of terrain. And the weather this year was absolutely perfect! 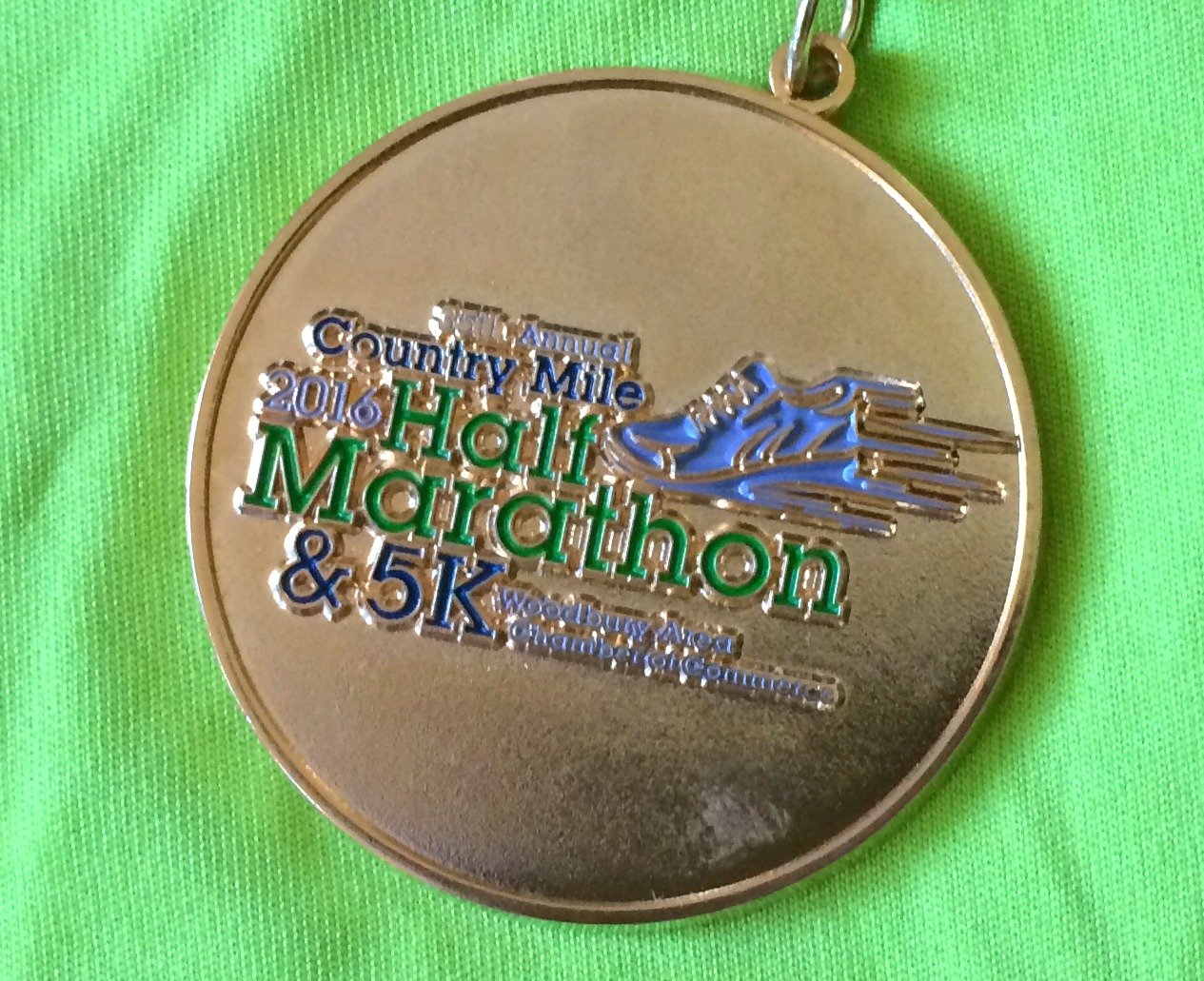 I still can’t believe I’m done, but I’m really glad that I am. I sometimes feel I’m not a true Half Fanatic because I’m tired of racing by the time I finish this kind of challenge. Now to figure out what comes next… (Yes, I know I have Marine Corps Marathon, but I have no goals related to that.)