You are here: Home / running / A brilliant run

I was chosen as one of the lucky bloggers at the start of the Mizuno Mezamashii Run Project.  While I was flattered to be included, I was worried about what shoe to choose.  I’d just gone completely minimalist and Mizuno didn’t really have that type of shoe yet.  I’d run in Wave Riders for many years and loved them, but they no longer worked for me after months of running in VFFs outside and barefoot when inside on the treadmill.

After some discussion with the Mizuno folks, I settled on the Mizuno Wave Universe.  It was listed as a “racing flat”, but with a 4mm drop and a 3 ounce weight, it fell somewhere between my VFFs and the Brooks Pure Connects I had moved into. 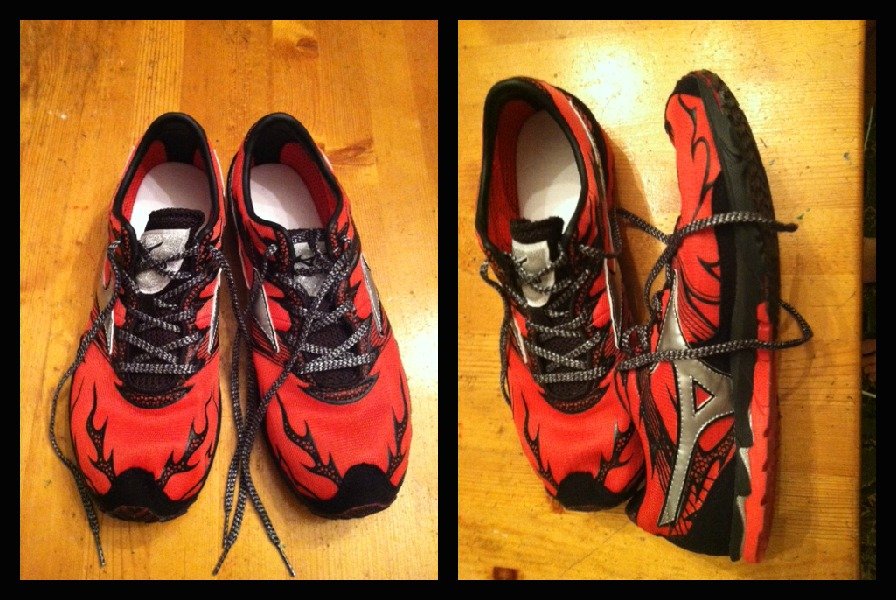 With their red and black coloring and flames, these shoes fall somewhere between obnoxious and awesome.  They are a unisex shoe, so the forefoot is quite wide.  The first time I put them on, I felt like I was lost in the shoe.  In fact, the first time I ran in them, I wasn’t overly impressed.  I felt like I was sliding around in them and they showed wear almost immediately.

5 months later, I love these shoes.  I’ve learned how to tie the laces to make the shoes snug around my ankle.  Now that I feel like the shoes are secure, my toes are appreciating the space to spread out in the front. The wear that I noticed at the beginning has not gotten noticeably worse. Until last week, though, I considered these my short run shoes.

Last week, I went out for a 5 mile run (which would have been a distance pr for these shoes).  Instead, I ran 7.  And the shoes were wonderful.  I have cranky toes on my right foot and anything past 4 miles has been causing discomfort as I’ve increased my mileage.  Surprisingly, the discomfort was much less in these shoes, which I credit to the width, flatness of the sole, and flexibility.  In fact, I’ve had less discomfort in all my shoes since I had the break through with these.

In the end, I’m happy I chose these shoes and may very well buy them again.  (Although I’ve heard rumors that Mizuno is coming out with a true minimalist running shoe and I really want to get my hands on that.)

Want to know more?  Check out the Mezamashii Project.