You are here: Home / beer / Beer Lovers with a Running Problem: the Hash House Harriers

I have long been intrigued by the concept of the Hash House Harriers.  I know that if I had started running before kids, I would have at least given them a trial run, but I didn’t even hear of them until after we had two kids.  So, when Heather responded to my plea for posts with the offer to write about the Hash House Harriers, I was all over it.  So, please welcome Heather from Relentless Forward Commotion!

Don’t forget that tomorrow is Tuesdays on the Run!  We’ll be wrapping up our 2014!  Join us with your wrap up or any other running related topic.

When Erika asked for a guest post, I immediately knew what topic I would write about: running and beer, of course.

Yes, running and beer have a long history of going hand in hand. We frequently hear of group runs ending with a cold pint at a pub, and almost every big race offers you a 12 oz plastic cup of their sponsor’s beer at the finish line. Research even says that beer might make the perfect recovery drink. As a health and fitness professional myself, I’ll be the first to remind you that “health” encompasses mental well being as well as physical fitness, and lets admit it: sometimes we adults like to relax and enjoy a good beer (or three). So, in my ever persistent quest to prove to the world that running can indeed be fun, I bring you yet another running and beer phenomenon: 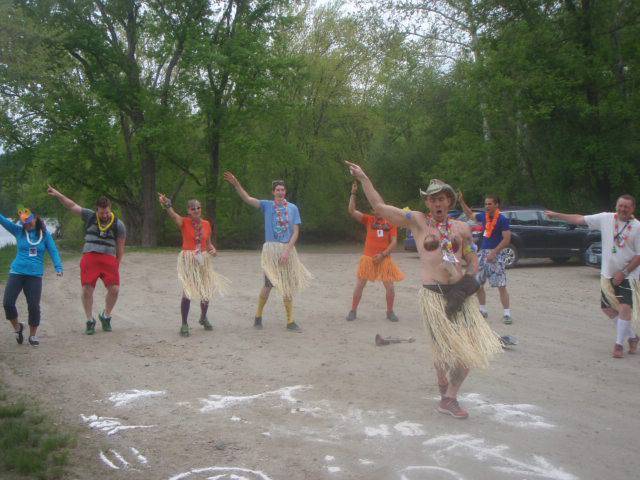 Known as “a drinking club with a running problem”, the Hash House Harriers are a world wide, somewhat underground subculture that you may have heard of without even knowing it (ever see a bunch of men and women run through the streets in red dresses?). Let’s take a quick glance at the rich history that surrounds “hashing”:

“Hashing originated in December 1938 in Kuala Lumpur, then in the Federated Malay States (now Malaysia), when a group of British colonial officers and expatriates began meeting on Monday evenings to run, in a fashion patterned after the traditional British paper chase or “hare and hounds”, to rid themselves of the excesses of the previous weekend. The original members included, Albert Stephen (A.S.) Ignatius “G” Gispert, Cecil Lee, Frederick “Horse” Thomson, Ronald “Torch” Bennett and John Woodrow. A. S. Gispert suggested the name “Hash House Harriers” after the Selangor Club Annex, where several of the original hashers happened to live, known as the “Hash House” where they also dined. (Authors note: this is where the name comes from. There is no “hash”, potato, THC, or otherwise, involved)

After the end of World War II in an attempt to organize the city of Kuala Lumpur, they were informed by the Registrar of Societies that as a “group,” they would require a constitution. Apart from the excitement of chasing the hare and finding the trail, harriers reaching the end of the trail would partake of beer, ginger beer and cigarettes.

The objectives of the Hash House Harriers as recorded on the club registration card dated 1950:

A typical hash goes a little something like this: The leader, or leaders of that days event, otherwise known as “hares”, leave a trail through the woods, streets, etc. typically using flour or chalk and predetermined marks (otherwise known as “hash”). The “pack” of “hounds” (i.e., everyone else) follows the trail, usually giving the hares about a 15 minute lead, with the goal (in theory) of catching the hares. However, the trail is not straight forward. There are false marks, dead ends, and tons of “check points” that involve things like singing, adult beverages (though never required), and various other possibilities depending on the particular “kennel” (running group). The trail usually starts with an opening circle (introductions and a warm-up), and a closing circle, where accusations of infractions made on trail occur…and of course, more singing and some more drinking. 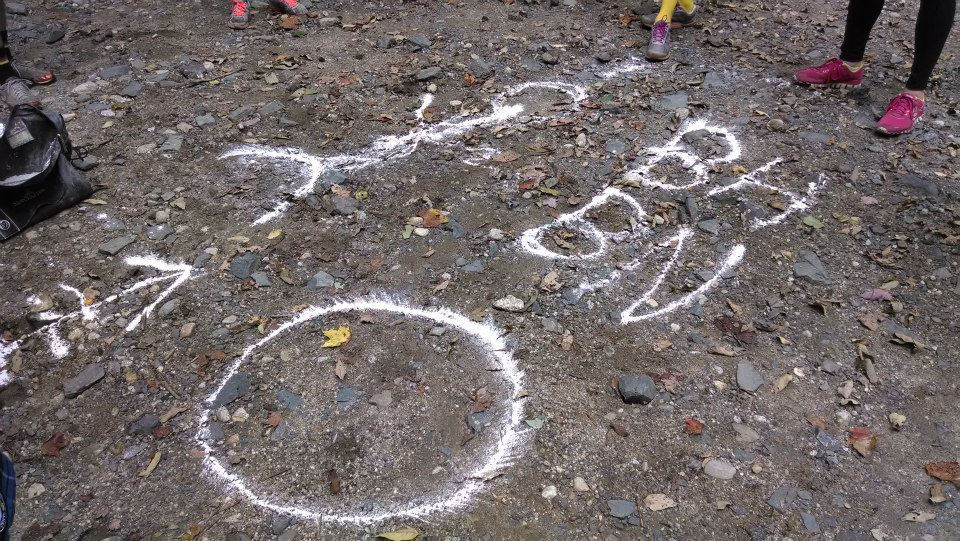 And now is the part where I should probably tell you, while some kennel’s are what we would call “PG”, many others, and much of hashing, are more in the “rated R” category. The songs, while hilarious, are often dirty and of the adult variety, and chances are you may end up seeing more skin than you bargained for (wear your sunglasses, pale butt cheeks are often blinding). As CNN says, the hash is “part scavenger hunt, part exercise and part debauchery.”

There are kilts, hasher names (typically earned and/or given after a certain number of trails, or some particularly worthy incident), whistles, shiggy socks, themed trails, walkers, fast runners, and people of all ages. There are so many things I could tell you, but I’m certain you simply wouldn’t believe until you see it with your own eyes. And I’ve probably already told you too much anyway…

Most of all, there is a lot of laughter. I left my first trail during the summer of 2012 with tears and my eyes and pain in my stomach, both from laughing so hard. As you may have gathered by the first hand observations detailed above, in addition to being a mother of two, health and fitness professional, and writer in the fitness industry, I am also a named hasher. Of course, my running and training always (usually) take priority over beer running, but there are indeed times when you just want to let loose, have fun, laugh with friends, enjoy a good micro-brew (though sometimes you’ll have to settle for a warm PBR)….and still run. And believe it or not, I still often get a killer interval workout during a hash trail. WIN-WIN. But most importantly, I’ve met some amazing people throughout my years of hashing that have become more than just friends, they are like family. 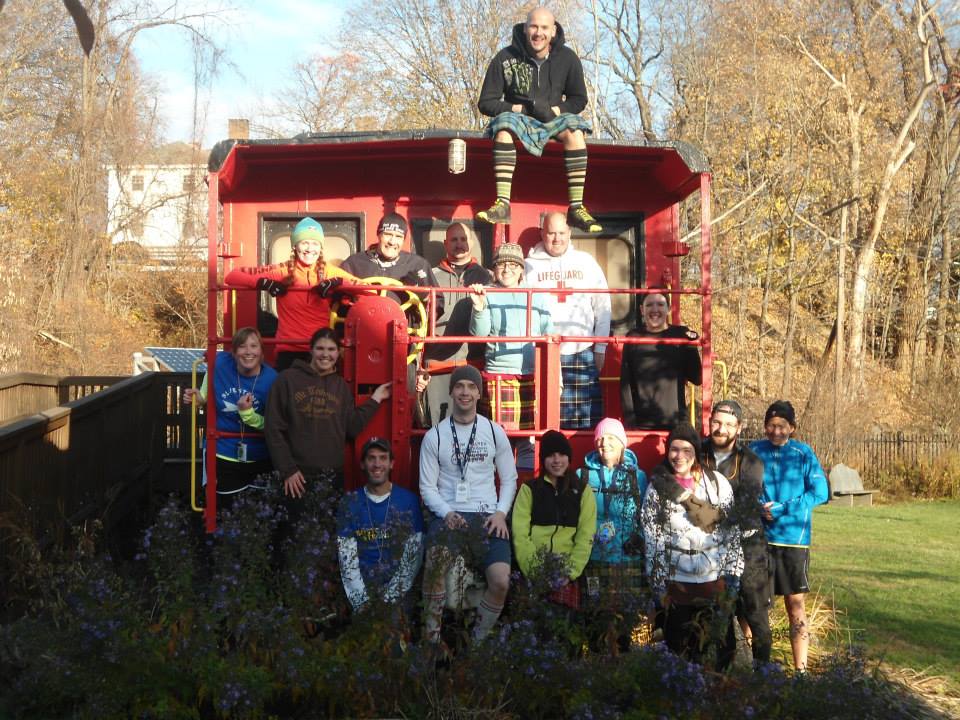 There are over 2,000 kennels world wide, and chances are, there is one near you (and if you live near Erika in the D.C. area, there is more than one kennel). Want to give hashing a try?

Here is my list of THINGS YOU SHOULD KNOW before your first H3 trail: 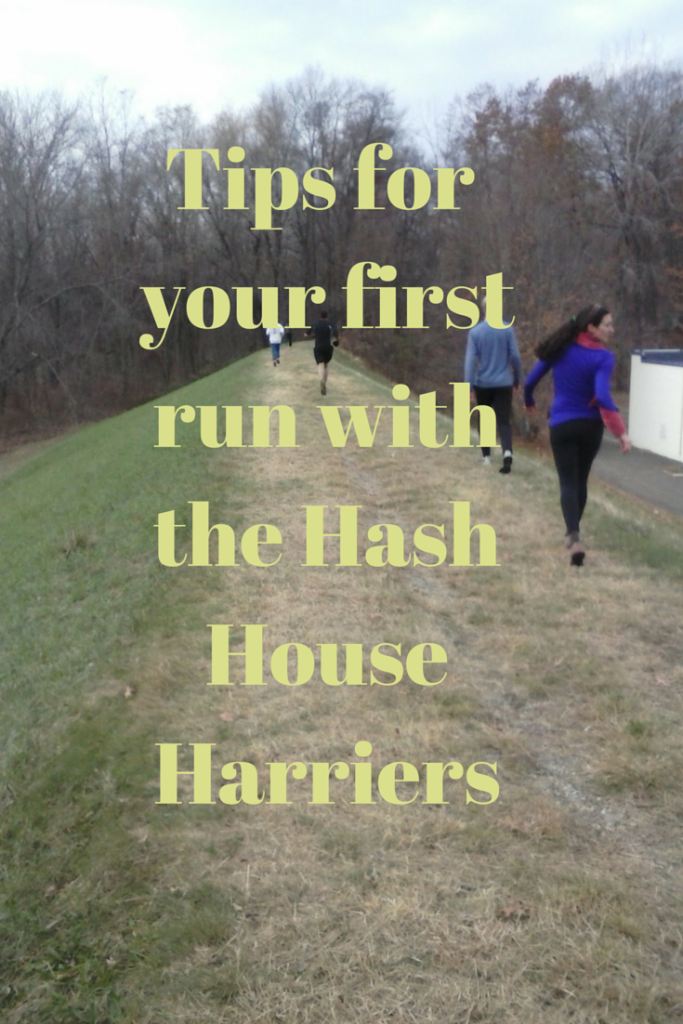 1) Go with an open mind. (The easily offended should probably stay at home)

3) Bring along your sense of humor. Laughter is good for you!

4) Be smart. Seriously, we all love to let our hair down and have fun, but don’t forget you are a grownup and not an obnoxious fraternity pledge. (And if you aren’t an adult over the legal age of 21, please find something else to do.) Have a designated driver if you choose to drink, be respectful of those around you (including trails and other surroundings), and by all means, don’t do anything I wouldn’t do you wouldn’t want to possibly show up on Facebook.

5) BE YOURSELF & HAVE FUN. You will meet people from all walks of life, from elite athletes, police officers, professors, housewives, to grandmothers, and everyone in between. Hashers are some of the most friendly, welcoming, hysterical (and sometimes drunk) group of runners you will ever meet.

So there you have it. Hashing in a nutshell blog post. ON ON, friends!

Have you ever heard of the Hash House Harriers? Ever run a trail? (Erika here, I’ve heard of them, but never actually tried it out. Perhaps if Beer Geek were a runner instead of a cyclist…)