And I’m not actually referring to the running (although a 10:12 average pace is nothing to write home about).  I just realized that both Tonia and G got their race reports up way before me.  They both have three kids and I only have two and yet, they managed to find time.  I’m gonna play the “age card” here.  LOL. (Photos below blatantly stolen from Racing with Babes ’cause I didn’t take my camera)

Yesterday morning, I had my alarm set for 4:00am.  After a night of pretty much no sleep, thanks to worry about various things, I finally got up at 3:45.  After showering, eating, wandering around the house, I finally left at 5:30 to head to the race.  To be honest, I was absolutely dreading this race.  Hot, humid, and hilly is not something I enjoy.  In fact, if I hadn’t been meeting two new friends, I likely would have blown off the race.

For once, the drive from DC was uneventful and I got there in 35 minutes, just as the cops started directing cars at the left turn into the parking area (Kudos to the race organizers and cops for that as the line of cars was just starting to get excessive.)  I parked and was heading to the porta potties when I saw two hotties rockin’ running skirts and knee high socks.  Tonia and G!  Woohoo!  We hung out for a bit doing the usual pre-race stuff and talking a mile a minute and then it was time to go.  As both mentioned, the announcer was WAY too loud.  By comparison, the gun was too quiet.  Anyways, off we went.

My goal for the race was to a)finish upright, b)stick with T and G as long as possible, and c) finish with a 10:00 overall pace.  The first twoish miles were on the highway.  I was dripping sweat within minutes, despite the very comfortable pace we were running.    Finally, we turned into the forest.  I was excited by the shade, but disappointed by the running surface.  I’m a klutz and the thought of running the rest of the miles on an uneven surface with big chunks of gravel did not excite me.

As soon as we turned the corner, the hills started.  Pretty much the entire rest of the race was either up or down.   One of the most frustrating things for me was that I’ve perfected the art of flying down hills with a minimum of energy expenditure (one of the pluses of doing speed work in a hilly neighborhood), but I wasn’t able to do that here.   The rocks and uneven surface made it entirely too likely that I’d break (or at least twist) an ankle.

I suggested to the gals that we walk the water stops.  I’ve found, over the course of a lot of 10+ mile races, that walking the stops does not hurt my splits and it enables me to drink powerade without getting it up my nose.  ;o)  They humored me and we walked.  In addition to a cup of powerade at every stop, I poured at least one cup of water on my head.

The LONG hill at mile 4 took a lot out of me, but I was still feeling pretty good.  The next four miles went by pretty easily as we chatted.  It was fun to hear all the compliments they got on their socks.  We stayed at an easy pace until mile 8.  When we hit the hill there, I needed to dial things back a bit.   My legs felt great (yay!), but my heart was racing from the heat and the hilly course.   T took off and from that point on, G and I walked at least a part of most of the hills.  We did have one major downhill once we hit pavement that we were able to fly down (my garmin recorded a 7:36 pace LOL).

At last, we turned out of the forest, into the sun.  We only had about a mile to go, but the heat was really zapping me.  When we had about a half mile to go, we hit a slight incline and I was pretty sure I was going to lose the contents of my stomach.  I made the decision to walk for a moment and sip some nuun.  I picked it back up and turned the corner – to another hill.  Since I’d already let go of my 1:50 goal, I walked again.  However, when I hit the top of the hill, I started sprinting.  There was some music playing that had the perfect beat and I timed my stride to the beat.  I passed every.single.person who had passed me on that last hill, plus a few that had already been ahead of me.  I turned the last corner, dug a bit deeper, and pushed hard for the finish line, finishing at about 1:52:25. 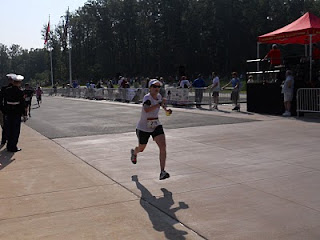 I had an awesome time with Tonia and G and will definitely be racing with them again.  The race was well organized and once I got used to the gravel, I actually liked the challenging course.  It did confirm for me that a little judicious walking (through water stops and on big hills) does not hurt my pace much.  In fact, my last mile was a 9:35, despite walking on several hills.  I would definitely consider doing it again, although waiting nearly an hour to get back to my car because of the shuttles plus a nasty high traffic stop and go drive home (in a stick shift car) make it a little less enticing.

So, two out of three goals accomplished, two awesome women met, and I’ve even made the promise that I’ll wear a skirt and socks to run with them if they’ll run a race with me when it’s cooler out. 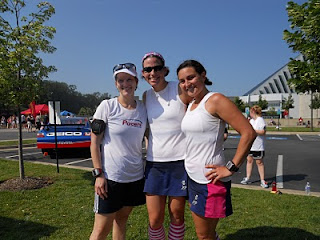