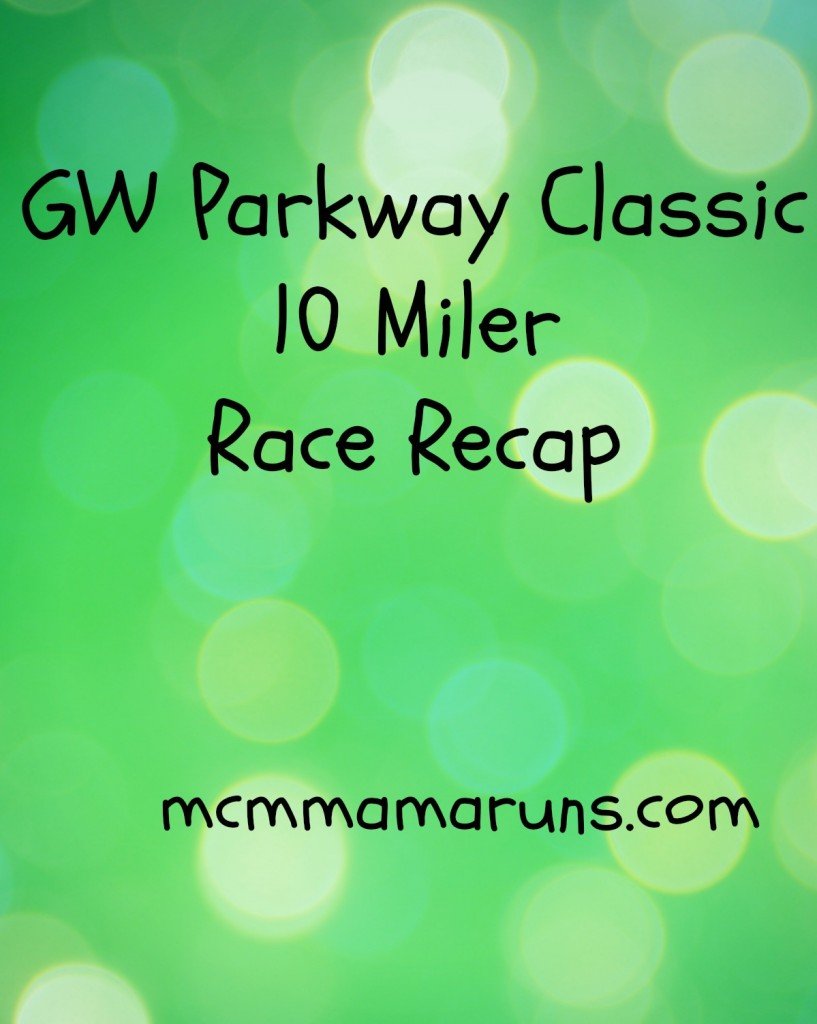 The rest of the story:
The GW Parkway race begins at Mount Vernon and ends in Old Town Alexandria.  Like many point to point races, this means a shuttle.  I got up at 5 am in order to leave the house by 6 for an 8 o’clock race.  I was already tired (Jones woke up twice and Shoo wet the bed 5 minutes before my alarm went off) and in a fragile emotional state (due to the death of our friend), so when I realized how hot it was going to be, I seriously considered going back to bed.
Instead, I took a quick shower, coated myself in sunblock, and had a peanut butter and jelly sandwich.  After I gathered all my stuff (I decided to run without my Fuel Belt this time), I headed out.  I parked my car by 6:15am and immediately boarded a very full bus, so I got to stand for the 10 mile drive out to the start.  We were at the race start by 6:30am, which left an hour and a half to kill before the race start.  I visited the portapotties a few times, drank a bottle of gatorade, and chatted with a few people, but I spent way too much of that time in my own head.   Usually that’s not a real problem for me, but it wasn’t a good place for me on Sunday.
Finally, the people started lining up to start.  I needed to pee, but the potties were a fair walk away and the lines were long.  I figured it was just jitters and tried to keep my mind occupied.  Finally, the race started!  Because the race started with a downhill and I knew that the first mile was mostly downhill, I went out fast.  Mile 1 and 2 were finished in 8:44 and 8:40, respectively.  I walked the first water stop at mile 2.5, where I saw a close friend who was volunteering that day.   By the end of mile 3, I was starting to get uncomfortable, not because of the running or the heat, but because I REALLY needed to pee.  Those of you who’ve birthed kids know what kind of issues I was having.  I finished mile 3 in 8:57 and mile 4 in 9:01.    Finally, I spotted a portapotty with no line at the waterstop at mile 5.  I ran in and OH did I feel better.  Quickly ate a gu, drank a water and a gatorade and headed out again.   My splits for miles 5 & 6 are messed up because I didn’t pause Garmin for the stop.
Thanks to the stop and the Gu, I knew I was feeling really good at this point, but I was worried about how hot it was.  I had planned to slow down to a 9:30 minute pace around the halfway point, but was still feeling good enough to run mile 7 in 9:16.  I walked the water stop around mile 7.5, drank two waters and a gatorade (it always amazes me how much liquid I can drink during a hot race and not get sick), and saw my friend again.  It was a real boost and I managed to finish mile 8 in 9:17, even with walking the waterstop.  I was feeling pretty good, but I made myself walk the last waterstop at mile 9.  I normally would have skipped it, but it was getting really warm and sunny (and I didn’t realize how close to a 1:30 10 I was).  Even with that stop, I finished mile 9 in 9:10.  Somewhere in there, I heard my name called and saw DC Running Mama walking past in the other direction (she finished #10 for women Woot!).  Hearing my name filled me with adrenaline and I knocked out the last mile in 8:25!
All in all, it was a good race. I was a little disappointed in my time, but given the heat and the potty stop, I did well.  I probably would have tried to spend less time at the water stops if I’d realized I was close to an hour and a half, but it leaves me with goal for the Army 10 miler in the fall.  It was well organized and I liked the actual course of the race.  I really could do without the whole “hurry up and wait” thing at the beginning.  I’m unlikely to run this one again unless I make plans to meet up with a friend.
I wore the new Lululemon shorts and they didn’t disappoint.  They have a small pocket where I stored a Gu.  I ended up running the entire race with it there and I had no chafing from the pocket or the shorts in general.  They were MUCH easier to get back up after the stop than a pair of compression shorts would have been.  Also, at one point, someone was shooting a hose across the road.  I intentionally ran through it, but ended up only getting my shorts soaked.  Amazingly, this didn’t make them feel heavy or cause any chafing.   Yes, I do plan to buy another pair soon.
—————————————————————————————————
Thank you for your kind words about our friend.  I’m not overly sad for him as he was a man of very strong faith and was ready to go home.  I am sad for his children though, who’ve been my friends since high school.  It was a huge reminder of how lucky I am that my dad is not only alive, but able to run races with me.