You are here: Home / running / Let’s talk injuries (Tuesdays on the Run)

Sometimes it feels like “runner” is synonymous with “injury”. I mean, how often do you open up a blog post to read and find out that one of your favorite running bloggers is dealing with an injury of some sort?  Shin splints, plantar fasciitis, stress fractures, achilles tendonitis – which one do YOU have?  But it doesn’t have to be that way!  That’s why April, Patty and I have suggested  “injuries” as the topic for this week’s Tuesdays on the Run.

Have you ever heard of Berenstain Bear’s Bike Lesson? (No? Go. Read it now. Love that book!)

“This is what you should not do” 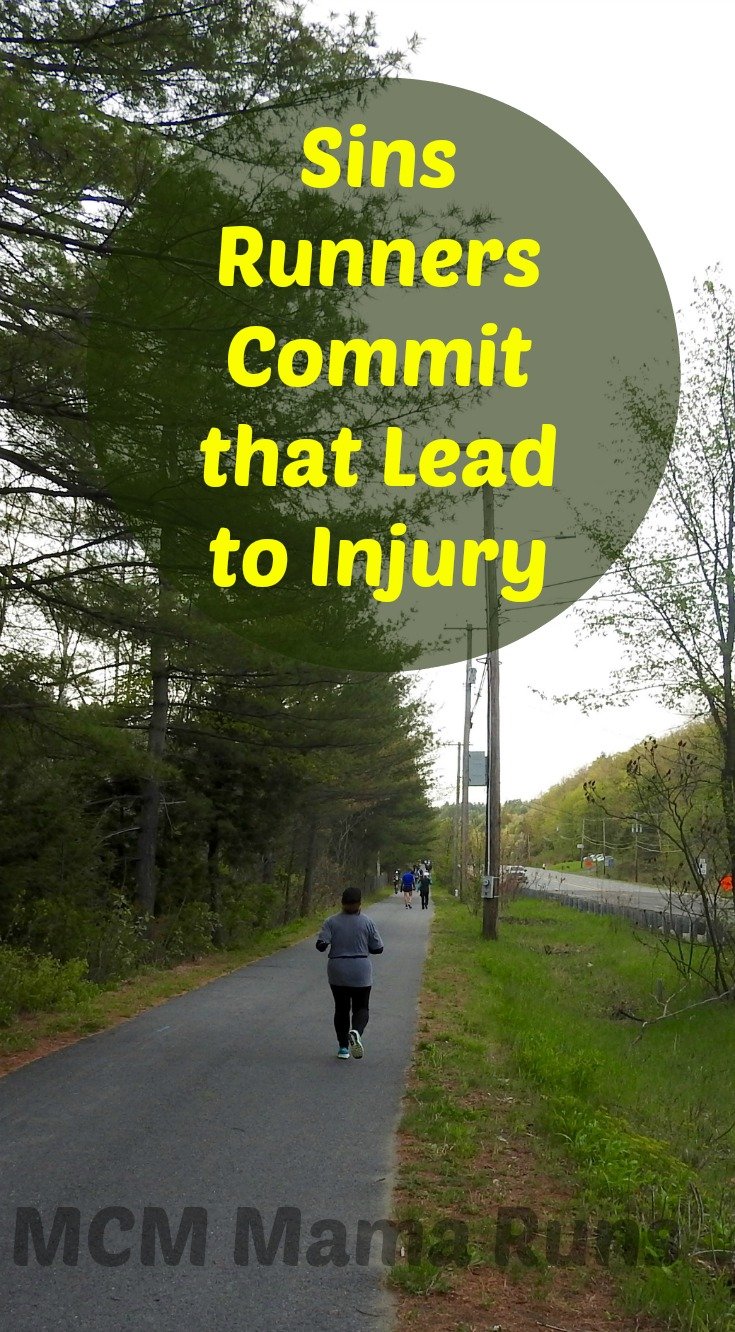 Sin 1: Ignoring that little niggling pain – Oh yeah, I do this one all the time.  One thing I was told in my RRCA coaching class was that if it hurts when you start running and then stops hurting, that doesn’t mean you aren’t injured.  In fact, that’s a very good time to take a break because you have a chance of heading off the injury.  But, if you are like me, you run one more time to see if it happens again. (Some of us run a few more times, thereby guaranteeing it becomes an injury.)

Sin 2: Disrespecting the 10% rule – You know the rule. Don’t increase your mileage by more than 10% a week.  And while you are at it, throw in a few recovery weeks.  If you keep pushing and pushing and don’t let your body heal, you aren’t going to make progress, you are going to injure yourself.  I actually did a great job with this during my training for 5 half marathons in 5 days.  I increased by 5-10% for two weeks and then had a drop back week.  Amazingly, despite reaching the highest mileage I’ve ever run, I came through the entire training AND all 13 half marathons injury free.

Sin 3: Challenging their body in too many ways at once – You know what I mean – let’s all add mileage to our long runs, do lots of speedwork, and hill train twice a week.  Every run must push us or it’s not a worthwhile run.  Yeah, that’s exactly what will land you on the injured list.  Asking your body to make too many adaptations at once tears you down instead of building you up.

Sin 4: Running, running, and only running – OK, I’m the poster child for this sin.  All I did all spring was run.  During my training cycle, I really had no time for other things, but once I started racing?  Yeah, I was just a slacker.  But all those other cool things you can do?  Yoga. Pilates. Weight lifting. Spinning. Cycling. Tae Kwon Do.  The list is pretty much endless.  And you know what those things do?  Strengthen your body in different ways than running which will not only make you run stronger, but will also help prevent overuse injuries that come from using the same muscles and movement over and over again.

Sin 5: Not asking for help – So, you’ve admitted you’re hurt.  That’s a great first step.  But all you are doing is taking a break from running and maybe icing and foam rolling.  Well, I have a secret for you: One appointment with a PT or a chiropractor or doctor (which one depends on what your issue is, what your insurance covers, yada yada yada) can often stop things from progressing and may make the healing process faster.  I’m pretty sure if I’d seen my chiropractor as soon as I hurt my calf instead of waiting two weeks (and a number of “trial” runs), I would have lost a lot less training time than I did when I ran my first 5 half marathons in 5 days series.

You’ll note that I didn’t include not-stretching as a sin.  I’m not sold on stretching being the solution. I’ve never been good about stretching and I can go ages without being injured as long as I don’t commit one of the above sins.

Disclaimer: I am not a doctor.  I’m a librarian who likes to research and has run a ton of miles and made lots of mistakes. Take my advice with a grain of salt.