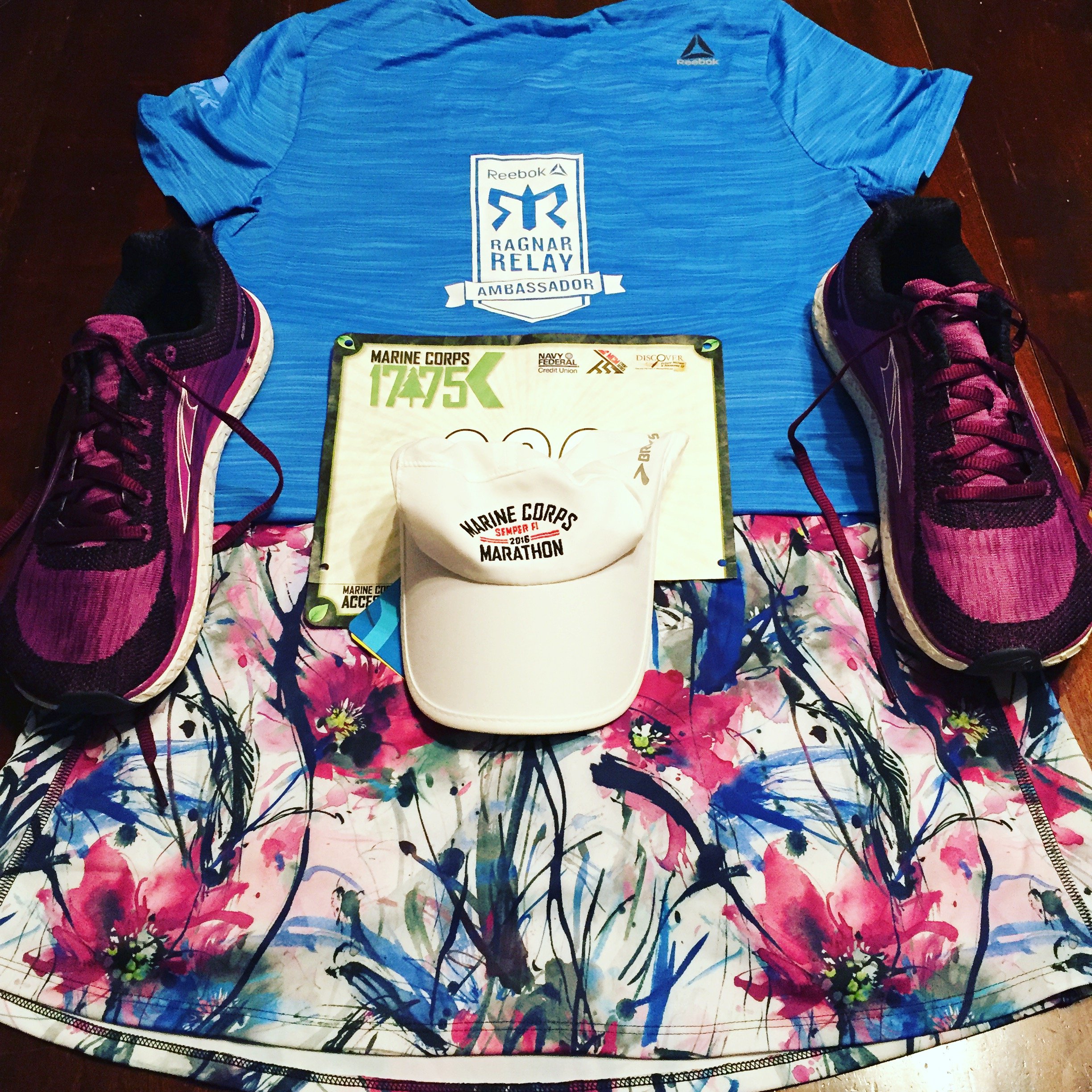 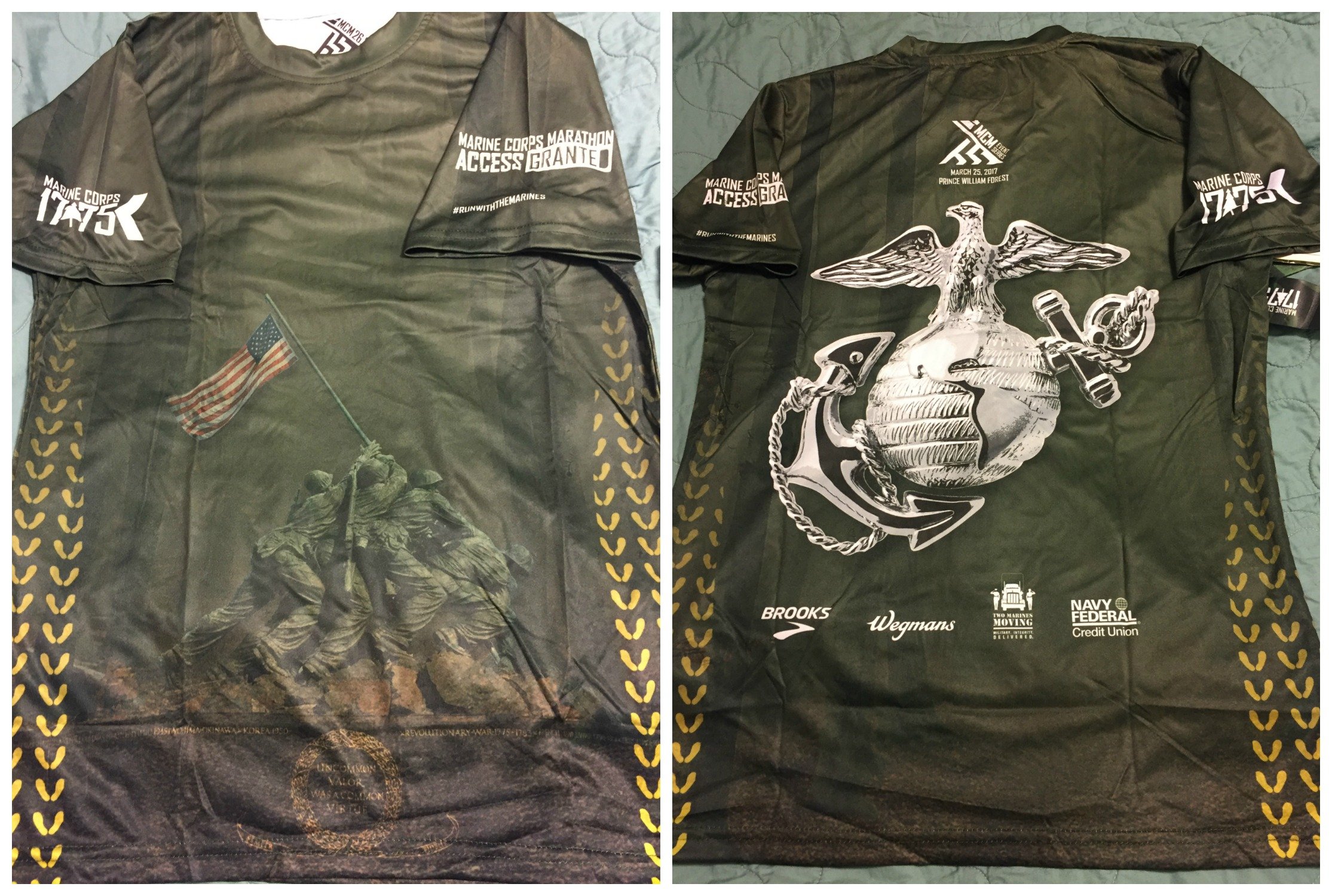 I love this race. It’s one of the hardest races I run each year, but I keep coming back. I didn’t originally sign up to run because of a scheduling conflict, but had a change hours before the transfer period closed. A quick plea to the Facebook group and Boom! I was in. Life continued to be a little crazy right up to the race. My Saturday plans changed more than once and then on Friday Shoo stayed home with a stomach bug. Thanks to him just feeling icky and a mom friend being “on call”, I was still able to shoot down to Quantico with friends to pick up my packet.

Saturday morning came way too early (3:45am yawn), but I popped out of bed and was ready to go when two MRTT friends showed up to carpool down with me. We hit the road right at 4:45am, which got us to the commuter lot in the sweet spot where there were still spaces and not a terrible line for the shuttles. A quick shuttle ride over to the starting line left us with about an hour until the race. I used the potties, stayed warm in the church, ate my sandwich, and then met up with the big MRTT group for a photo. 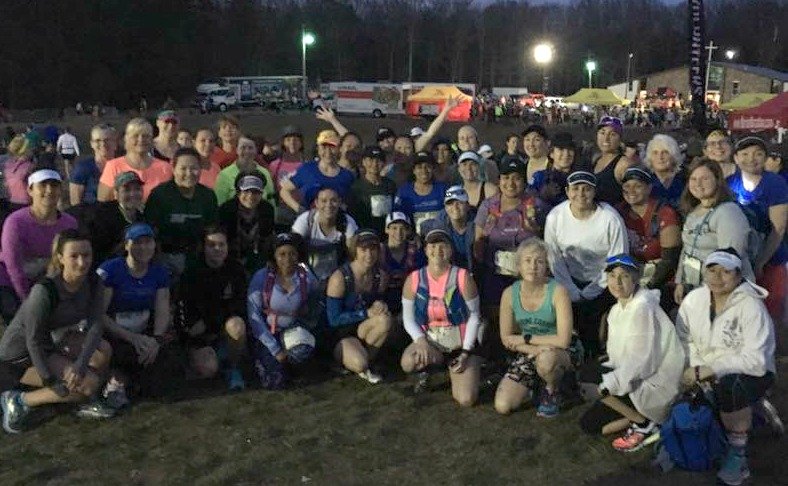 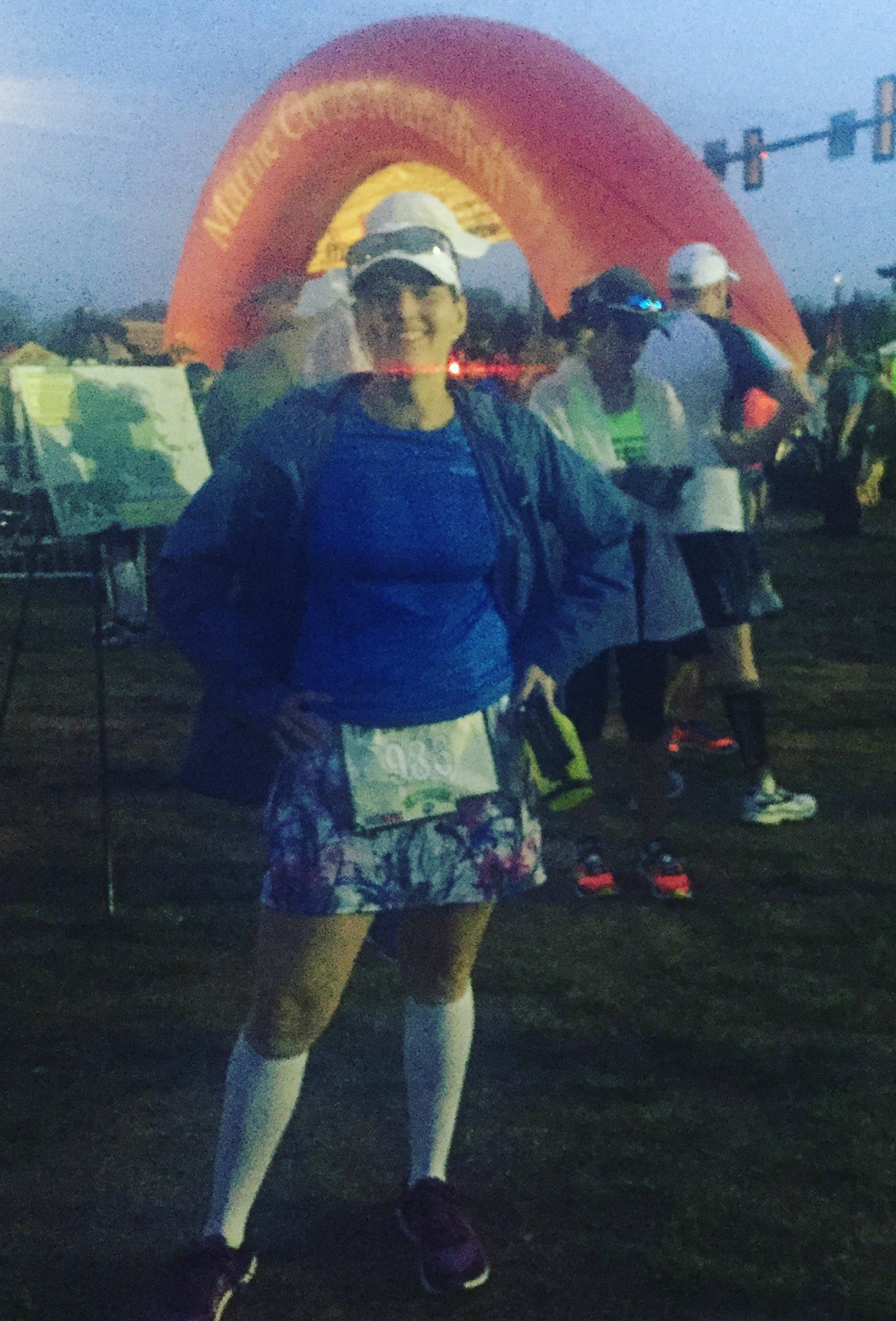 Then it was go time! I ditched my throwaway jacket before we started and was very quickly glad that I had done so. This was not a goal race in the traditional sense (I was just running for the golden ticket), so I took it easy with a goal of finishing in two hours. As per usual, I found the first 2.5 miles challenging as we went up hills and down hills and tried not to turn my ankle on the big rocks and uneven gravel.

I was so happy when we hit the paved part and just tried to push myself a little as we headed towards the big hill at 4.5 miles. 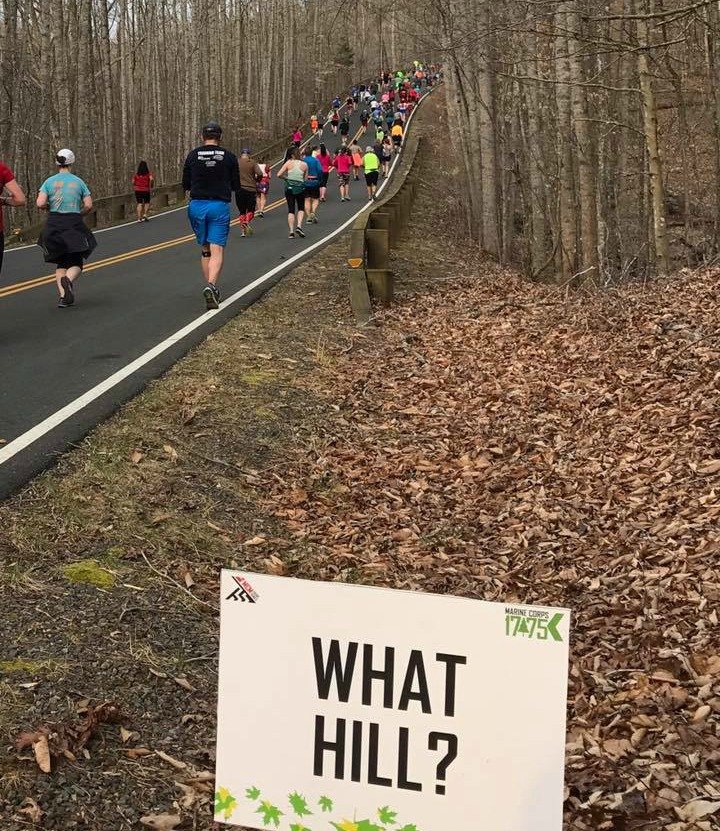 I walked it. I walked it last year, the year before that, and I will likely walk it next year. I’m ok with that. I was also dealing with a super tight calf and a numb foot. I need to remember to always roll my calf before a race. It was pretty miserable for a couple of miles.

After the big hill, the remainder of the paved part of the course is rolling hills and I was happy I could run a bit faster than my goal 11 minute pace. I knew I’d lose some of that time back when we hit the big hills in mile 10. I was just happy that feeling had finally returned to my foot before we headed back to the trails. Uneven surfaces + not being able to feel them would have been a recipe for disaster.

We headed back onto the dirt/gravel path at about mile 8.5. I knew there were some big hills coming up, so I just ran as hard as I could on the flats and downhills. Given the number of uneven spots and big rocks, that wasn’t actually very fast. All three of the big hills happen in mile 10, so it’s always one of the slowest for me. As per usual, I walked them. Maybe someday I’ll care about my time enough to try to run them, but probably not.

The final mile is mostly flat or downhill, so I tried to pick up the speed. I ended up chatting with a woman who was trying to beat 2 hours as well. I knew that if she stuck with me, she’d make it as I planned to make it with a bit to spare. As soon as we hit the pavement with a quarter mile to go, I picked up the pace. I could have hit 2 hours without a sprint, but I don’t know how to finish a race without passing people LOL. 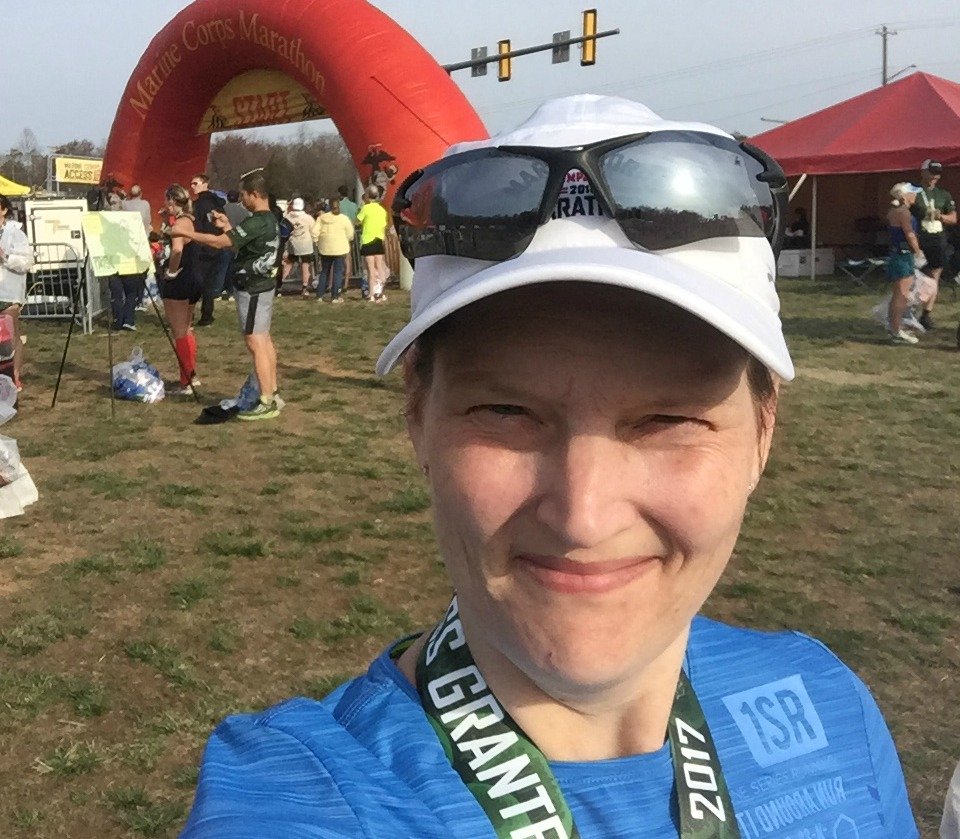 Would I do it again? Yes. This race challenges me in a way that none of my other races do. I love the atmosphere, the course, the Marines, everything. It is hard to get into, but this year for the first time they allowed bib transfers. I’ll likely try again next year and run it if I do get in. I need one more year after MCM 2017 to get into the Runner’s Club. 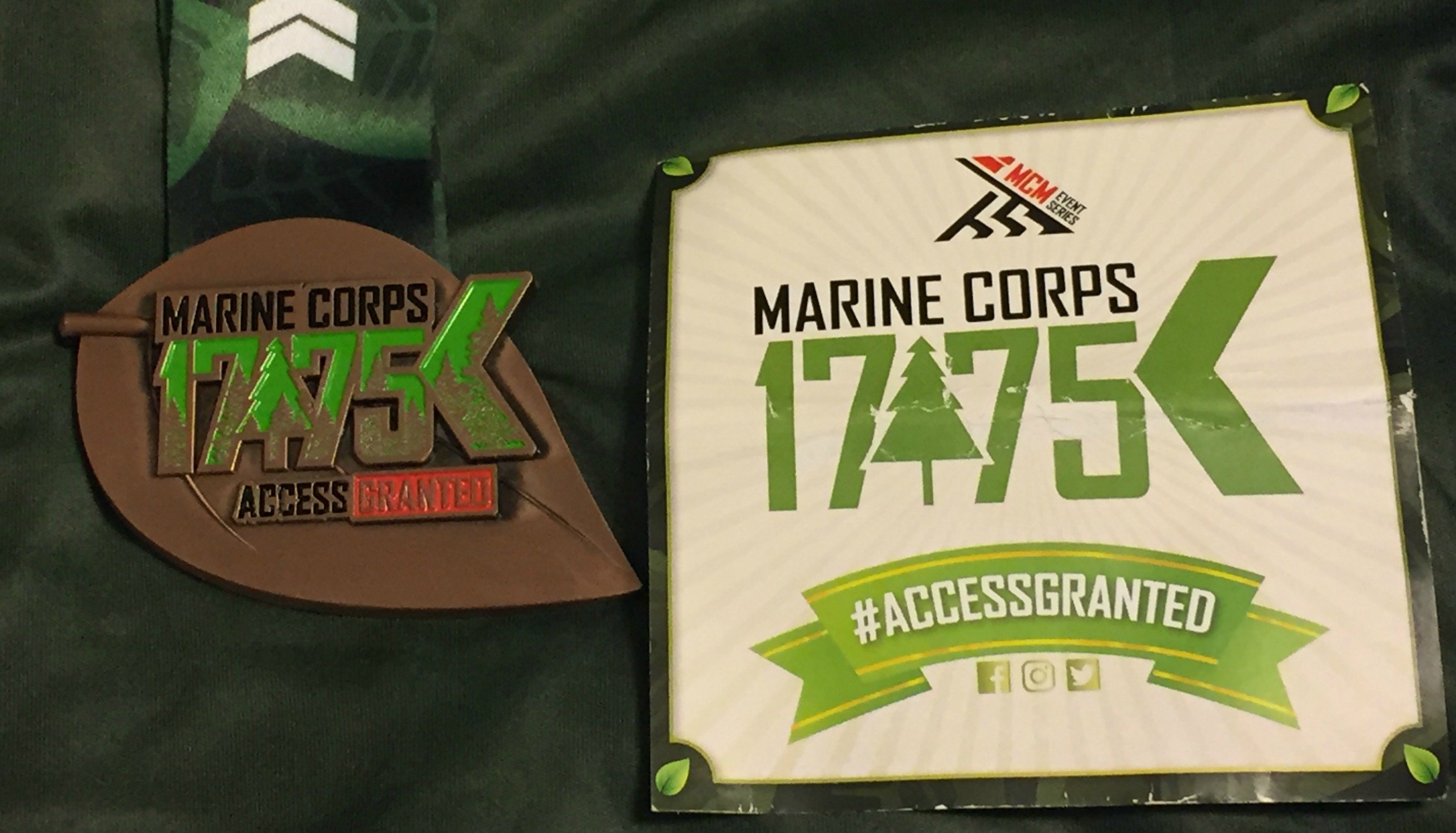 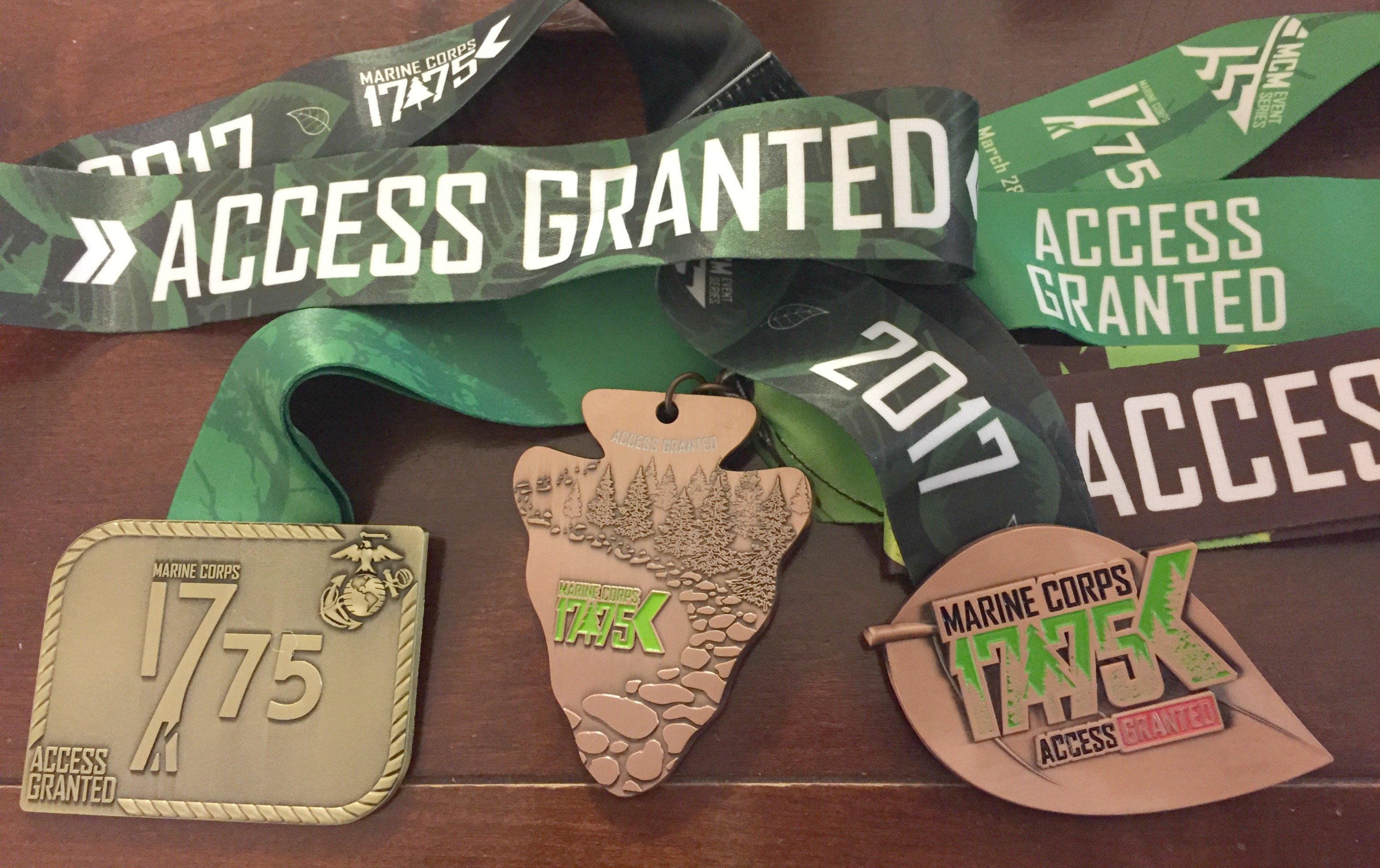