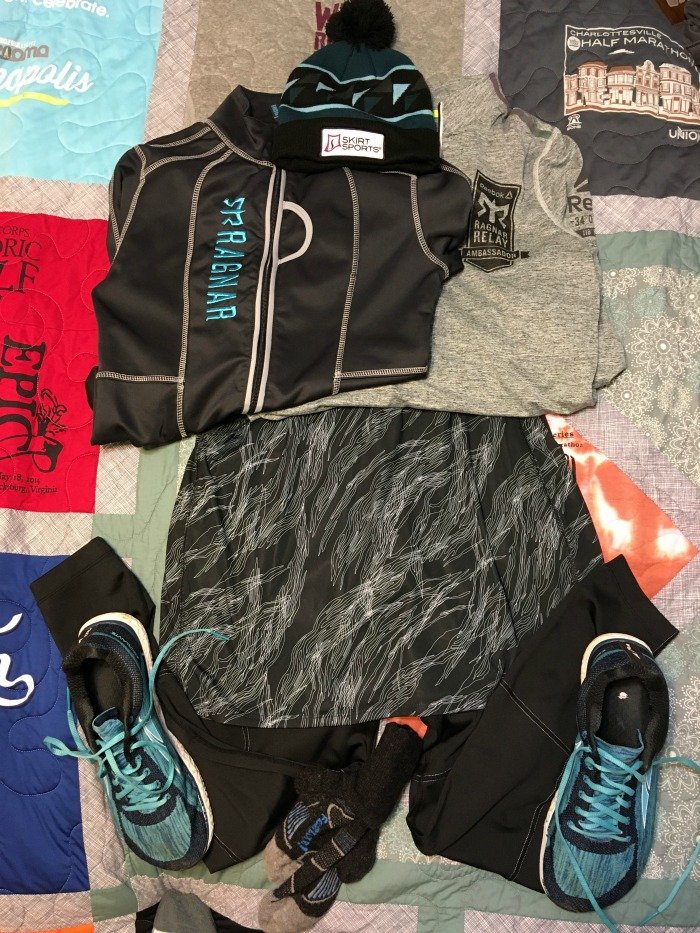 I have a love/hate relationship with this race. I love the course, despite it being one of the hardest races I run each year. I hate having to drive down 95 on Friday to get my bib. I hate even more having to get up by 3:45am so I can leave my house by 4:45am to drive down 95 for the race. But I’m also way too cheap to get a hotel room and I’d have to leave DC around noon on Friday to get there in time to make it worthwhile. But I’ve still done it in 2015, 2016, 2017, and now 2018.

Saturday morning came way too early, but I hadn’t slept much at all, due to nerves and an unhappy stomach. For the first time, I didn’t have anyone to carpool with, so I just had to get myself ready and out the door. I hit the road at 4:50am, which was a little later than planned, but turned out to be fortuitous when an accident was cleaned up before I got there. I got to the commuter lot right on time and hopped a shuttle to the start. I immediately headed to the church, where I hung out for a short while before getting into the potty line. The line was indoors and the bathrooms were real bathrooms, so I was happy to hang in line for the almost 40 minutes it took. After that, I headed to bag drop where I left my race shirt for a runner who wanted an extra for his Marine son. Then it was just a few minutes until race time. 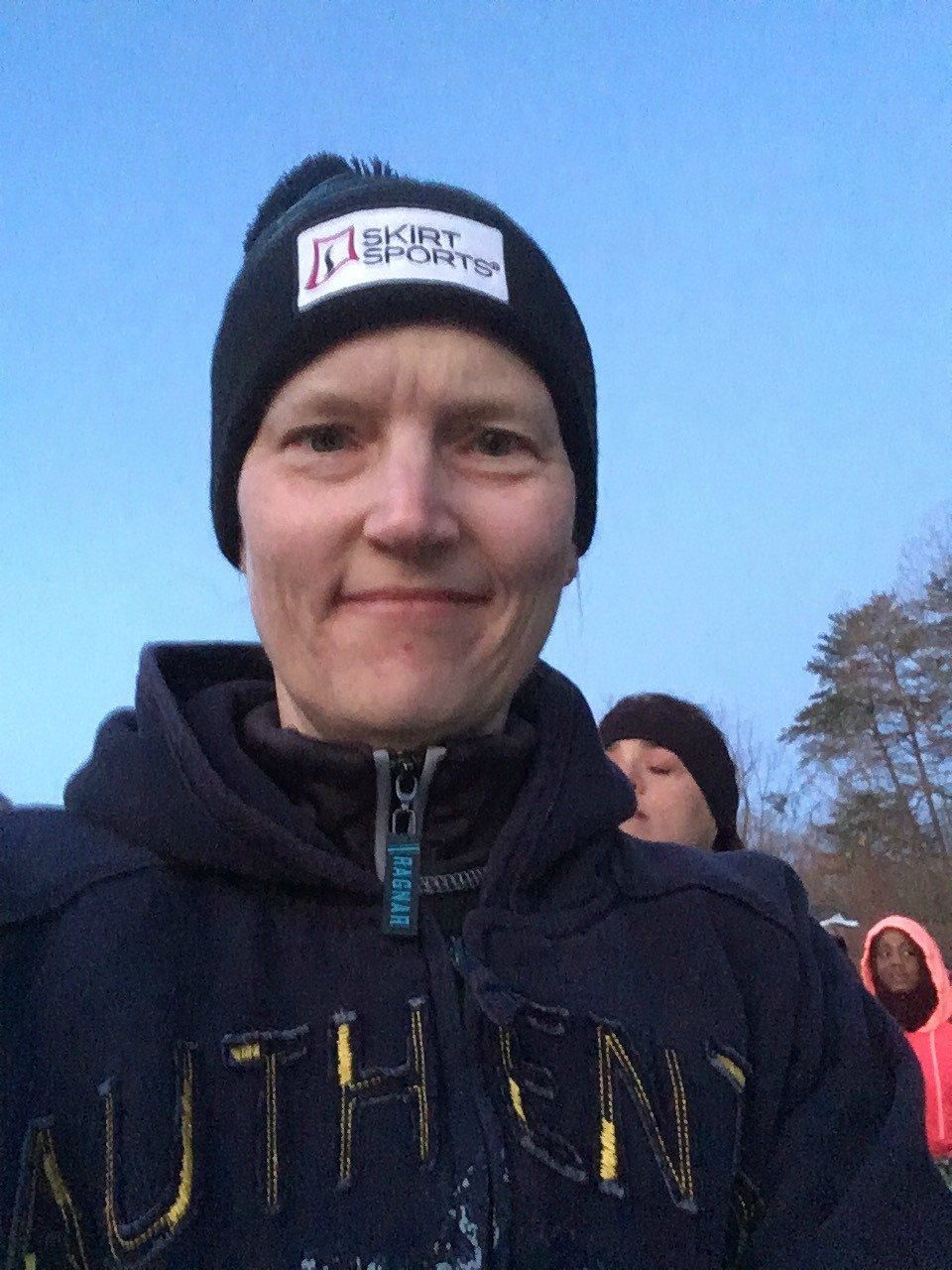 I didn’t really have any goals for the race, other than to get back to my car before 9:45am. Why? Because the express lanes were going to be turned at 10am due to the March in DC. I didn’t want to get stuck in traffic.

I started slowly and was happy that my first two miles were sub-12. I was just running easy and trying not to hurt myself on the trail part. It was its usual rocky, uneven self with the added bonus of mud. Once we hit the pavement, I picked it up a bit until the big hill at mile 4.5. I felt great, so I actually had a sub-10 mile! 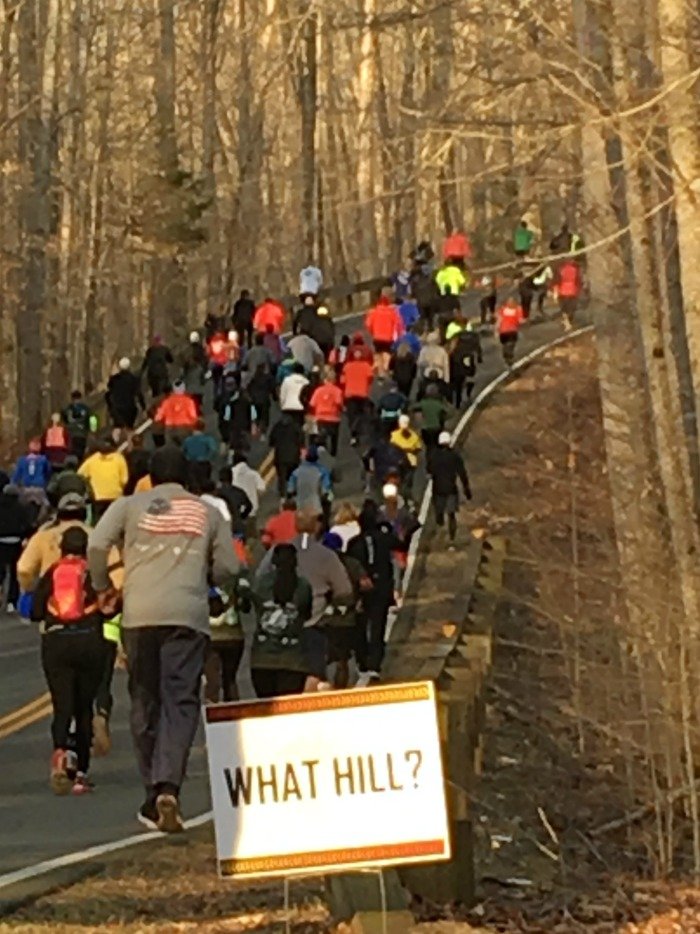 When I got to the HILL, I stopped and spent some time trying to get the perfect picture. Then I walked up the hill. Or maybe I should say strolled, as I wasn’t walking all that fast. I have walked this hill every single year and if I ever run again, I’ll walk it again.

After the big hill, I picked up the pace again. I really needed to pee, but didn’t want to stop and wait at lines. I didn’t drink any of the nuun in my handheld because I was afraid of the consequences, but luckily it was cold and I wasn’t really thirsty. Finally, we made the turn onto the fire roads again and I knew I had only 2.5 miles to go.

Right around the 9 mile point there was an open portapotty. No wait at all! I totally took advantage of that, but then it took me several minutes to get my skirt and tights back into place. One I was settled, I headed towards the finish. Mile 10 has 3 decent hills in it. I ran part of one, but walked all of the rest of the hills. It’s just not worth the effort to run up them. Finally I was in the home stretch and I picked up the pace. As I turned onto the paved road that leads to the finish line, I realized I had two minutes left to be under 2 hours. I picked up my speed and sprinted towards the finish – only to miss 2 hours by 29 seconds. Oh well, blame the picture taking or the skirt arranging. 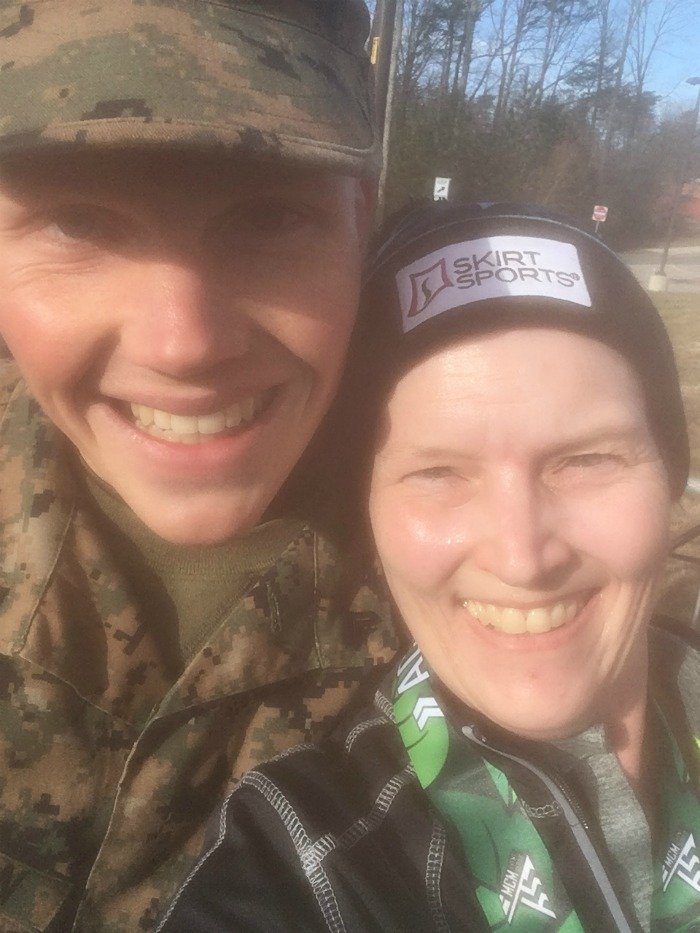 Would I do it again? Yes. I never have to run it again, as MCM 2018 will be my 5th Marine Corps Marathon and my ticket to the Runner’s Club. I might still run it. I hate the logistics, but I love the challenge of the course. It will never be a fast race for me, but it’s definitely a great way to kick off my spring season. So, don’t be shocked if I sign up again next year. 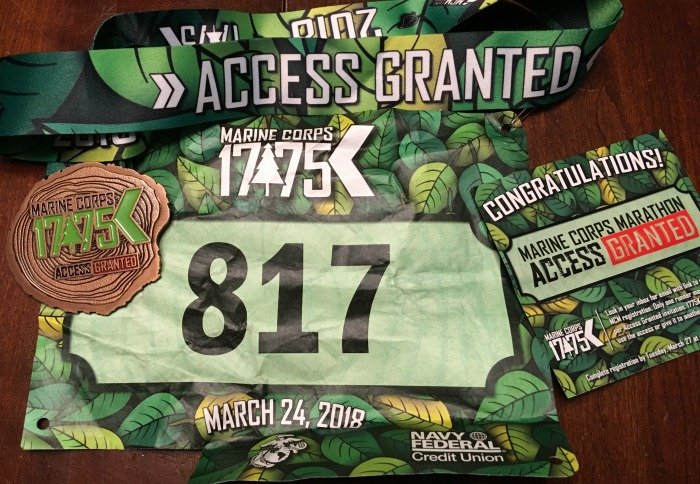 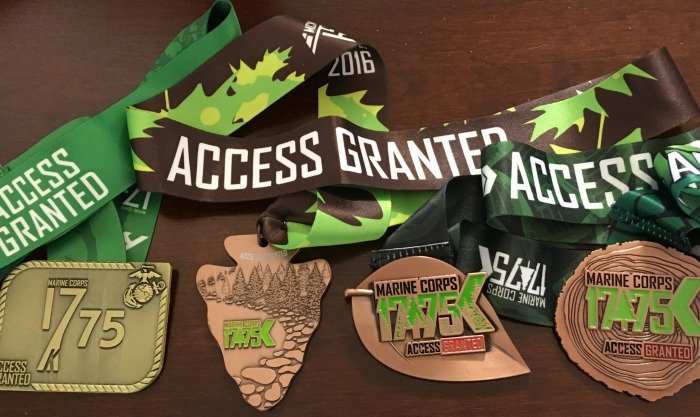 Today is our usual Tuesdays on the Run and the topic was DNF/DNS. I’ve been really lucky in that I’ve never had a DNF (although last year’s MCM was close) and only a few DNS. Every year I consider DNSing this race, but somehow I’ve always convinced myself to just do it.