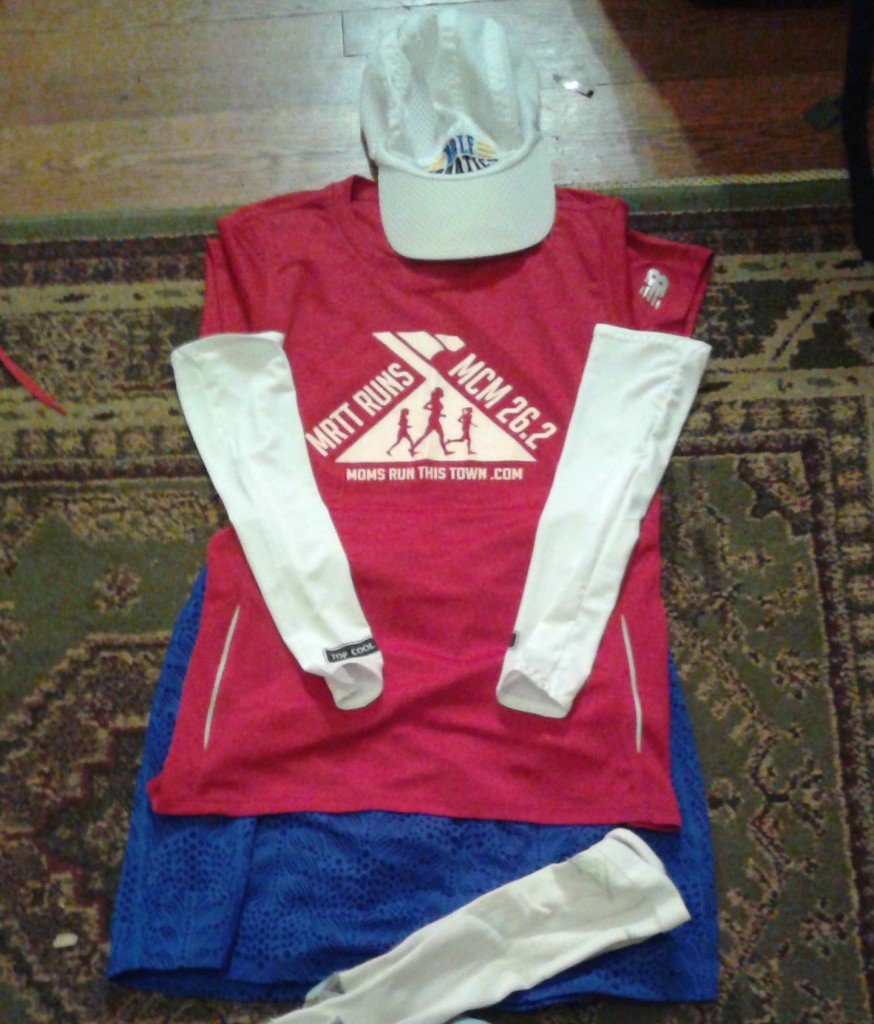 What I wore: hat, MRTT MCM shirt, Skirt Sports Happy Girl Skirt(this is an affiliate link), compression socks, arm sleeves, and Altra Running One 2.5 (affiliate link). I carried a handheld water bottle, two GUs, a cut up rice krispy treat, and an extra nuun tablet. (Oh, and my metro card in case I decided that I needed to DNF.)

I met up with some friends at a hotel in Rosslyn to walk over to the start. Due to a snafu on the part of the hotel, we got out a little later than planned and got to the security line right around 6:30am. The back up was crazy! The marines did an awesome job getting people through as quickly as they could (they were super organized), but it was a lot of people and it took us almost an hour. I had on an extra long sleeve shirt  plus a space blanket, which was great as it started to rain. I managed to stay mostly dry and ate my PB&J while we waited.

Thankfully, shortly after we got through security, we found some porta potties with short lines. I was pretty desperate for one at that point, due to hydrating pretty seriously the day before and that morning. 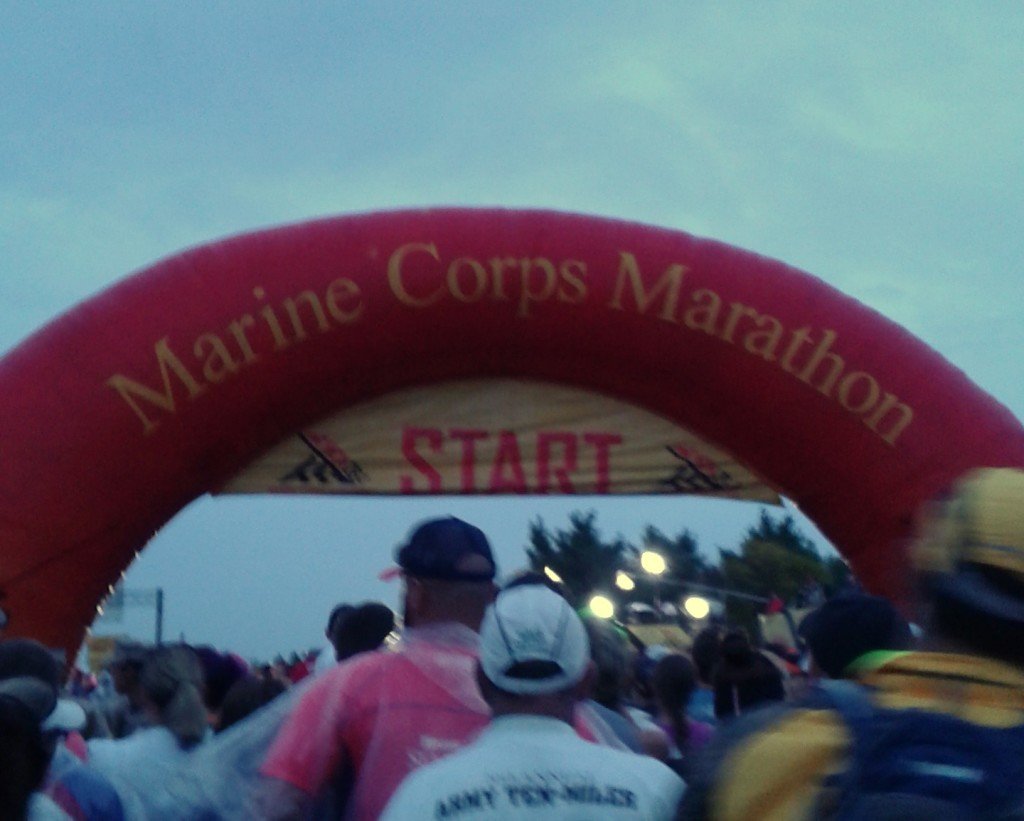 We headed down to the start line and began the long walk back to the 5 hour expected finish area. As we were walking, we were treated to the sight of parachuters coming down practically on top of us. 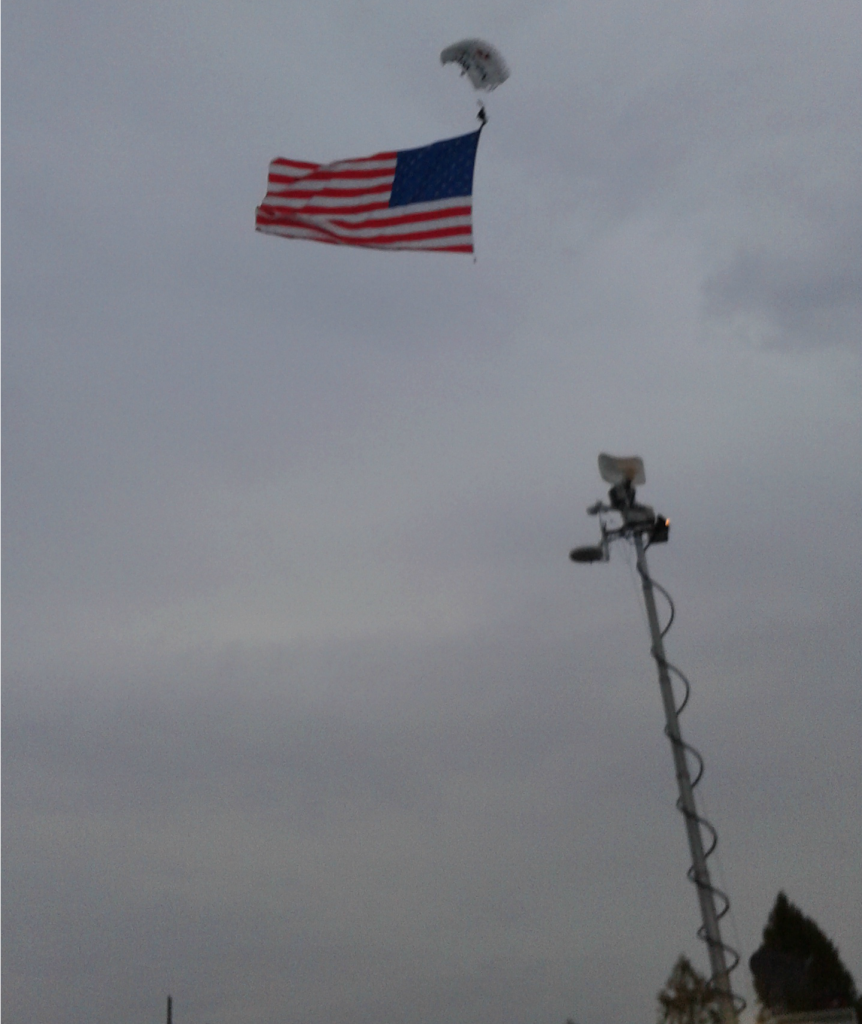 Quite awesome! And then it was go time. Or, in reality, 20 minutes of shuffling forward to the start line. 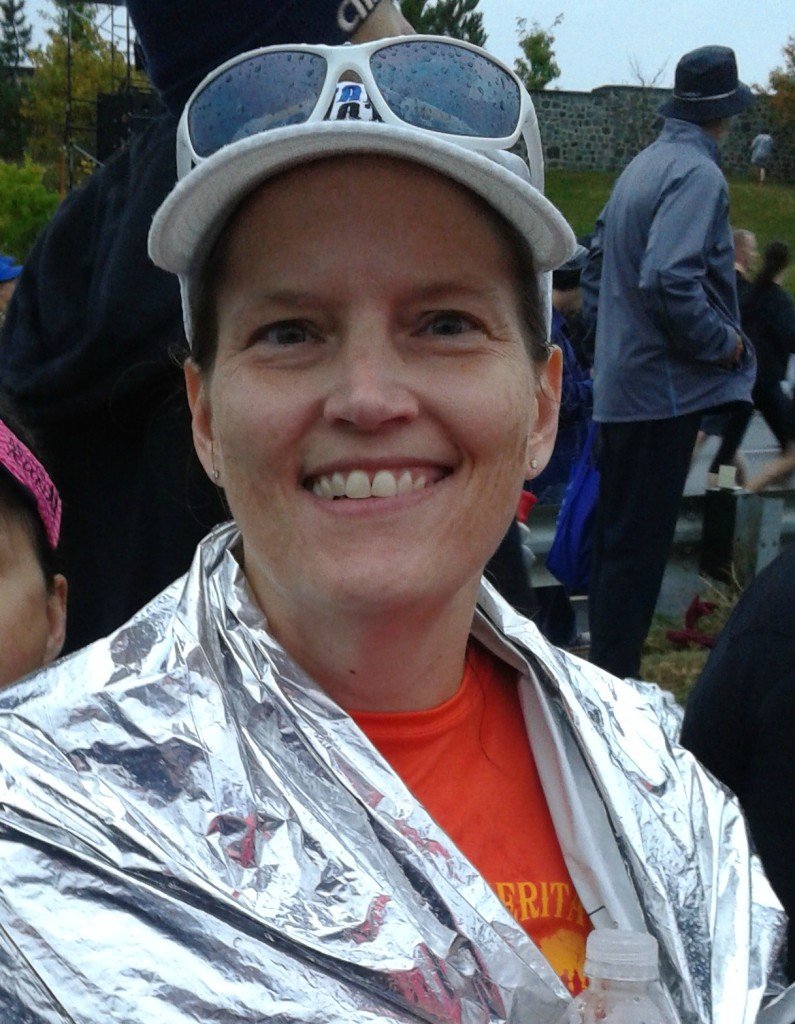 Finally, we got to the start line and off we went! I had decided to maintain an 11-11:30 pace for as long as I could. The start of the race is the hilliest part of MCM until the very end when you run up to Iwo Jima. I’ve run that hill more than a few times, so it doesn’t intimidate me. I just took things slow and easy and watched for Beer Geek and my parents. I got to see them around mile 2 and nearly handed them my arm warmers, but decided to keep them on for a bit. 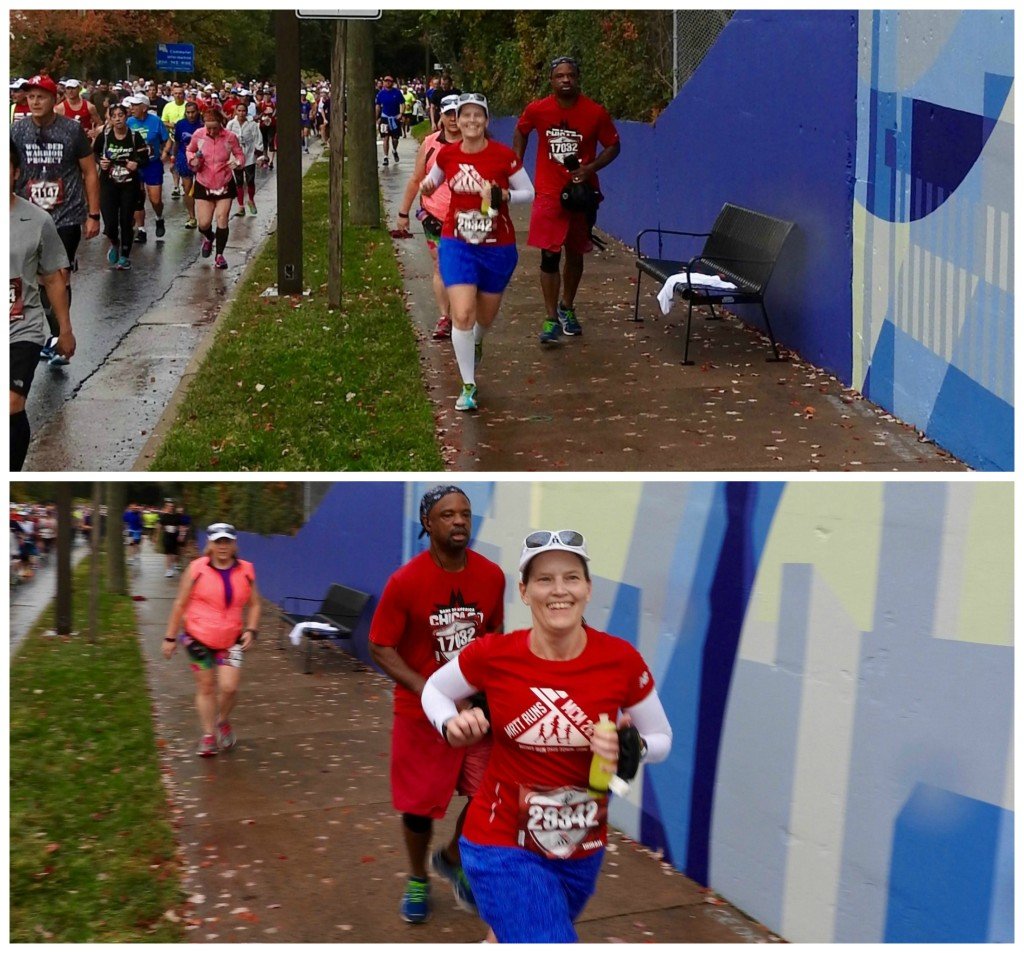 We crested the hill finally and made the right turn onto Spout Run. As we went under a bridge, I stepped in a deep crack filled with water. I was pissed to have a soaked foot that early in the race, but I was happy that I hadn’t hurt my ankle or foot when I did it. The next few miles were uneventful. I had cracked the screen on my phone on Friday, so I didn’t pull it out to take pictures. I just trotted along, enjoying the run. At one point we went up a big hill and it was so congested that it was nearly impossible to move forward, but that was the only time during the race that I felt like I was completely unable to run my own pace. I also made sure to drink the Gatorade at every water stop.

Next thing I knew, we were at mile 10 and headed onto Hains Point. Hains Point is one of the more boring parts of the race, but I was still feeling pretty good. My hip occasionally made itself known and my legs were a bit tired, but I was maintaining my pace. I started to feel a little light headed, so began eating my rice krispy bar (best fuel EVER!). I occupied my mind by reading signs and really focusing on the Blue Mile (a mile dedicated to fallen soldiers = so very emotional). Towards the end of the Blue Mile, a marine handed me a citrus flavored Clif Shot gel. I had hoped I would get that flavor as it’s a favorite of mine. The gel and some ‘ade gave me a boost and I finished the first half exactly on target – 2:29:20.

I knew that I could do the first half with no problem. What I didn’t know was when I would start to fall apart in the second half. Spoiler: I never fell apart, I just got slower and slower as my legs and feet tired.

I made it my goal to run until mile 20 AKA “The Bridge”.  I knew that I was going to have no issues beating the bridge, but my body was beginning to rebel every time I walked a water stop and then started running again. I was afraid to make walking a regular part of my plan as I wasn’t sure I’d be able to start back up with running. I knew that if I made the bridge at the pace I was going, I could walk the rest and be finished well before the cut off.

I spent the next five miles counting down mileage, thanking marines, high fiving little kids, and just generally making myself keep moving forward. I finished my rice krispy treat, drank a ton of ‘ade, and stayed in the moment. I wasn’t hurting, I was just getting tired. Slowly but surely I was losing time and I knew that 5 hours was not likely. I kept moving as fast as my legs would go though. I promised myself that once I reached the bridge that I could walk and call Beer Geek to let him know how I was doing. At the last water stop before the bridge, I made sure to drink plenty and filled up my handheld with half ‘ade and half water. I was ready for the bridge.

I lost a lot of time on the bridge – my phone was acting up and I couldn’t see my screen (partly from the sun, partly because my phone dimmed its screen somehow). I kept walking to try to call, but since I couldn’t see my screen, I thought my phone was dead. I knew that MRTT had a cheer station at mile 22, so I decided I’d borrow a phone there and call. I was, however, suffering from marathon brain and the only number I could remember was my home number (and that one only barely.) I couldn’t even remember Beer Geek’s work number that he’s had for as long as I’ve known him (it rings to his cell, which I could not remember either.) Finally, I got off the bridge and stopped in a shady spot to fight with my phone. I discovered that it was on, just dim and called Beer Geek and chatted with him for a minute. This took away the mental stress I was under, so I put away my phone and started running again.

Just past mile 22, I saw MRTT, including Coco! 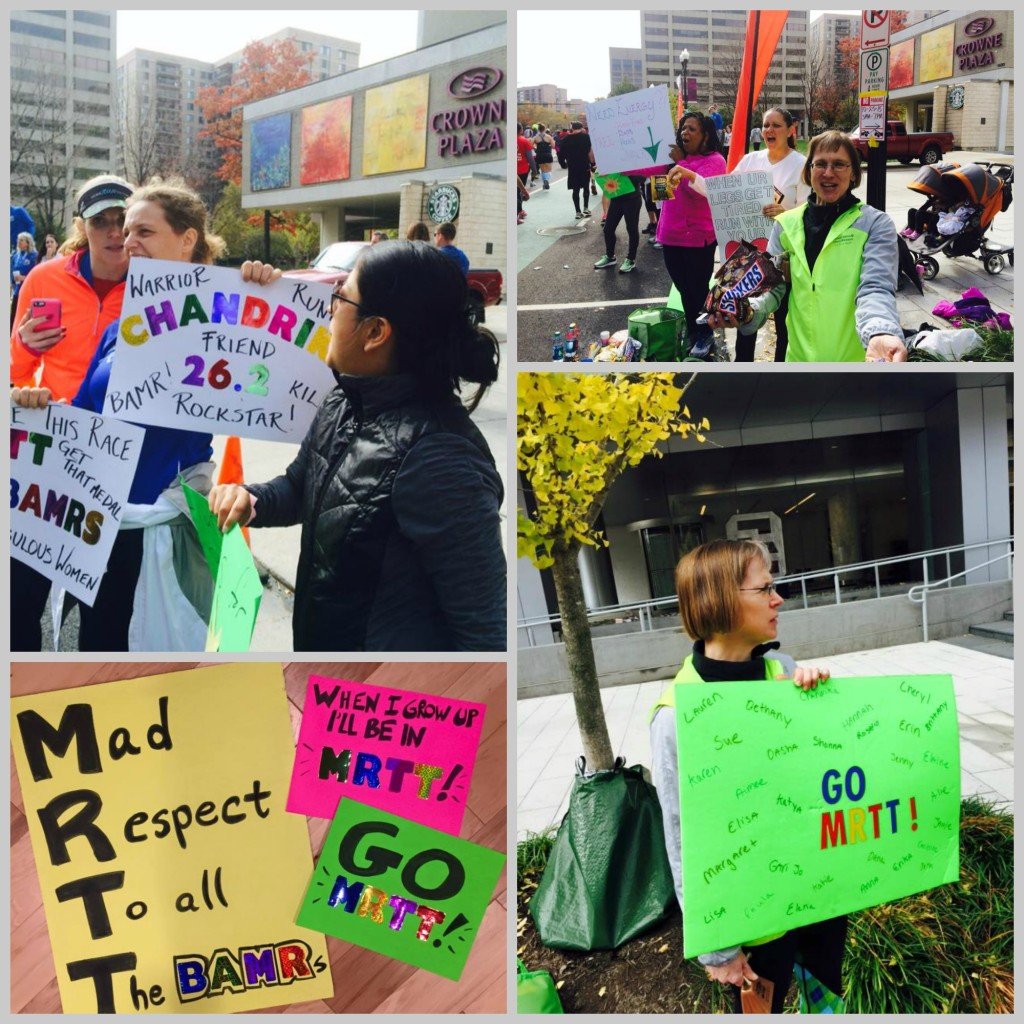 I was so happy to see them that I actually ran back to them for a hug. I really needed that pick me up! I kept on going. I told myself I could walk “in a minute”. I just kept telling myself that over and over and kept on “running”. As I passed the donut station, I was not at all tempted. I was kind of surprised as I thought I’d want food at that point. Instead, I just drank water and ‘ade at the next station and kept going. I was still running everything except the water stops, but I was getting more and more tired.

With 2 miles to go, I had a sore foot (friction from my sock) and my legs were out of energy. Surprisingly, I was still in a good place mentally, I was just running out of steam. Just as I was contemplating walking, a woman ran up to me. She told me she’d been running behind me for a while and liked my pace and wondered if it was ok to run the rest of the way with me. Umm, hell yes! The next mile flew by (mentally anyways, physically we were moving slowly). At mile 25 we came upon Sister Larry Theresa of the Holy Church of The Sacred Pavement AKA a man dressed as a nun. 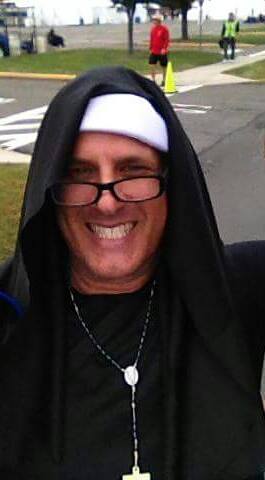 He was just what we needed. We were informed of the commandment “Thou shalt not walk”. And then he raised his cross and yelled “the end is near.” I’m pretty sure I giggled the rest of the way to the hill up to Iwo Jima.

Anyone who is from DC or has run the Marine Corps Marathon knows about the hill up to Iwo Jima. It’s not an easy hill on fresh legs, but on legs that have completed 26 miles, it looms like a mountain. I didn’t have much left in me and could not keep up with my new friend as she ran in, but I did pick up my pace. I high fived every single marine lining the turn and ran into the finish with a smile on my face.

My slowest marathon ever, but an incredible experience. 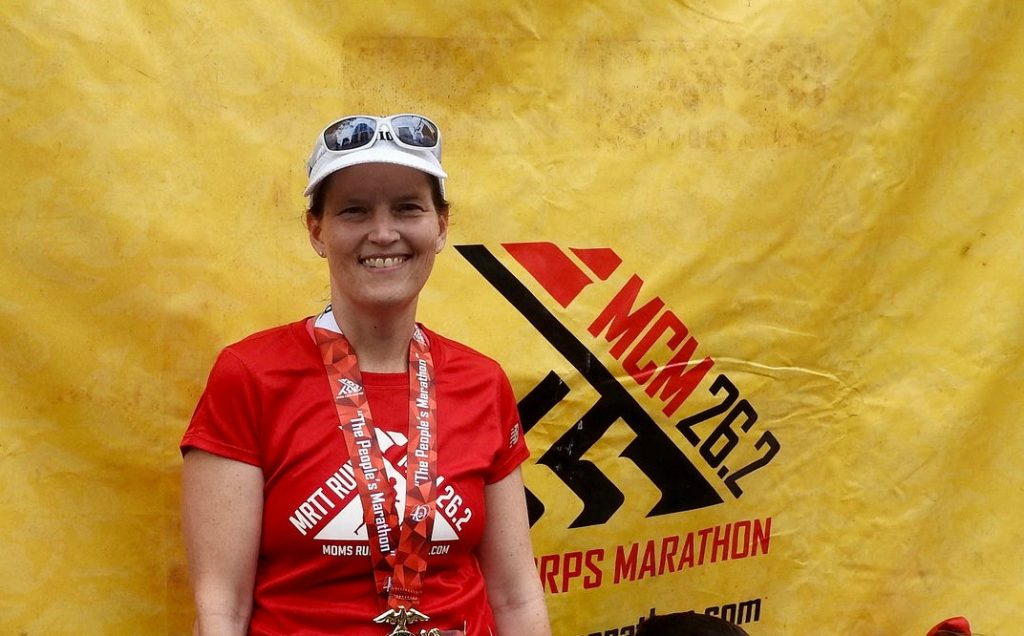 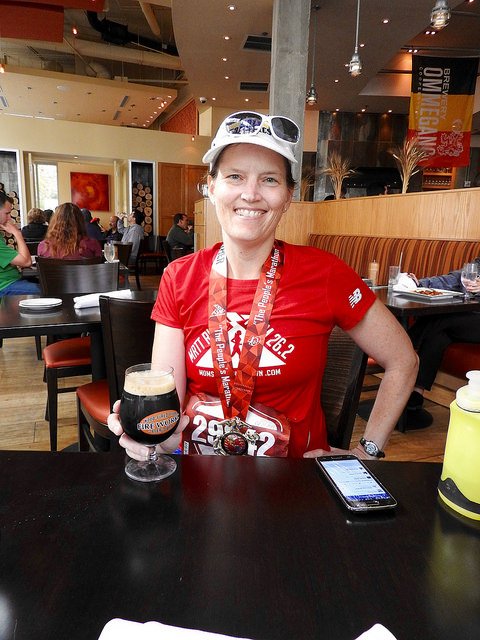 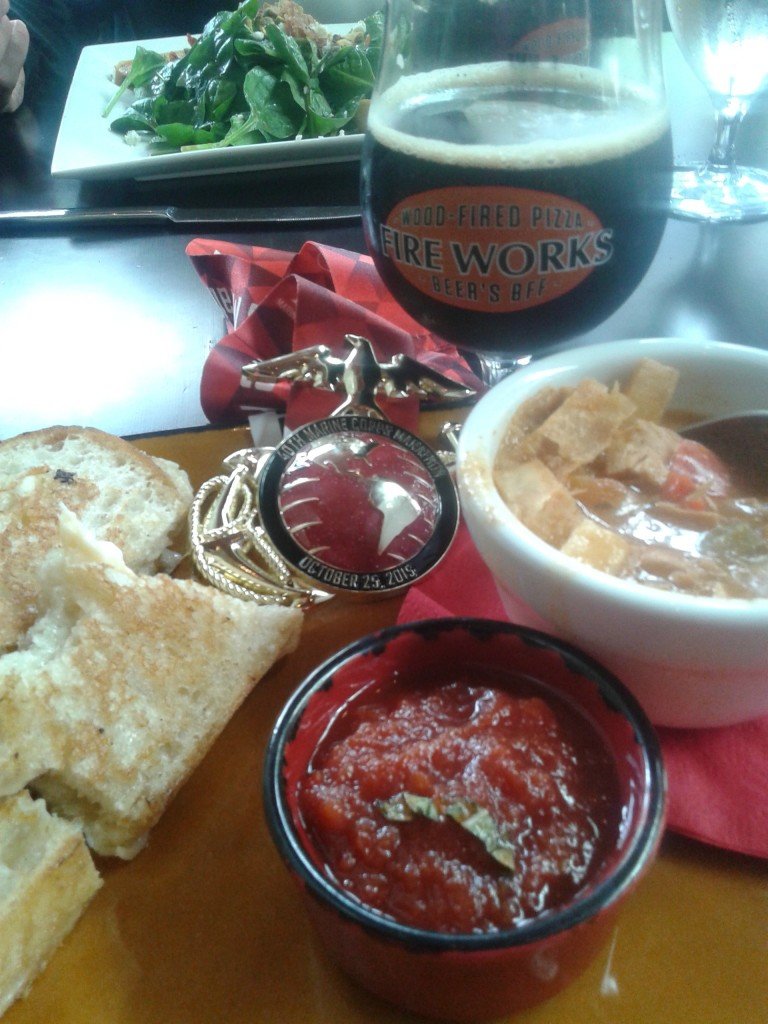 As I mentioned before, I recovered pretty quickly. I was really sore and tired on Sunday night, but by Monday I was walking normally. Will I run this marathon again? Not any time soon. There’s a lot to love about it. It’s an incredibly emotional race and I love running around DC, but I prefer smaller races and I hate training through Virginia summers. But I don’t want to say never. After all, I said never after my first one in 2008…

If you had asked me on Sunday if I’d ever run another marathon, I would have said no.  I even told Beer Geek that 5 marathons seemed like a nice number to stop at.  Now… I’m not so sure.

For the moment, it’s time to put running in the back seat and focus on losing the fluff I’ve gained this year. I joined a gym on Sunday afternoon, so some weights, elliptical, and other activities are on the agenda for now.

I don’t have any races on the calendar until May 2016. The DTs are already starting, so I’m sure something will be added soon.

All in all, I’m glad I stuck it out through the crazy hot summer training, the bronchitis, the hip issue. I’m glad I forced myself to run the crazy cold 17.75 in March (that I will try to run again in 2016). And I’m glad I showed up at the start line on Sunday. I’ve learned a lot about myself and despite being my slowest marathon, it’s one of the best executed races I’ve ever run. 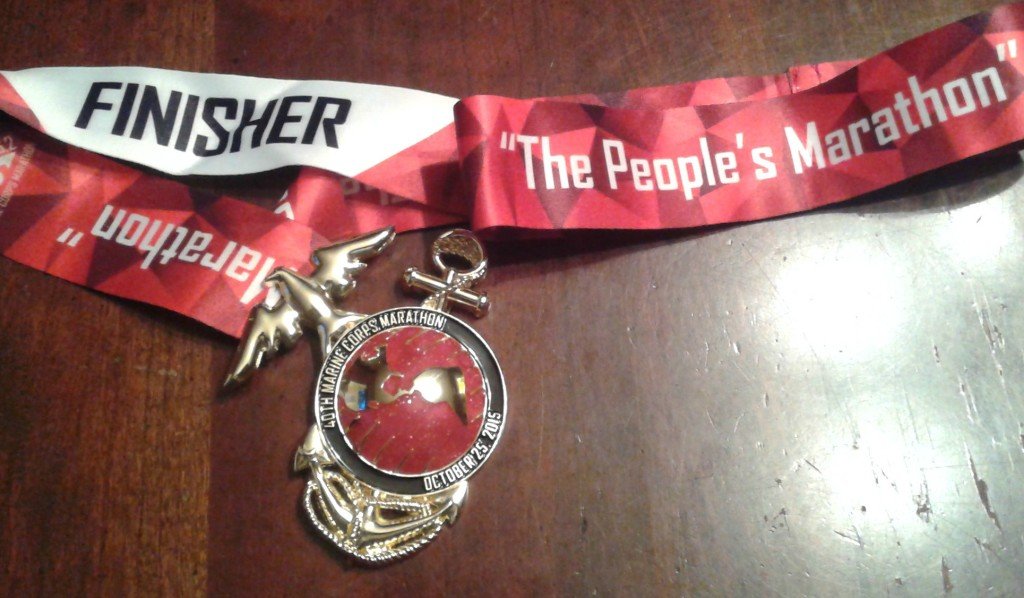