This past weekend, I completed my 8th half marathon for 2013.  It was also the 8th state I ran in this year (5 were new states and 1 was a new half marathon state).  What made this race different?  It was a trail half marathon and that, my friends, is a whole different experience.

Before I get into an actual race report, I just have to say – I BLEW MY GOALS OUT OF THE WATER!!!

Warning:  This is crazy long.   Mostly because I want to remember it.  Feel free to skip to the conclusion. 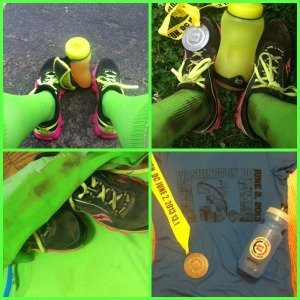 I didn’t sleep much at all Saturday night.  I was really nervous and felt like I had a lead ball in my stomach all night.  I woke up tired and crabby, but determined.  I was out of peanut butter and only had one slice of bread, so I had to improvise and eat a banana, a piece of bread with jelly, and a handful of walnuts.  I grabbed everything I needed and headed to the parking lot, forgetting to bring anything to eat while waiting for the race.

The drive went fine (not a lot of traffic at 5:30am on a Sunday morning) and I ended up catching one of the first buses.  After a 20 minute drive, we were dropped off at Great Falls for the start.  I immediately hit the potties.  Then I sat around as I had caught a 6:10am bus and the race wasn’t until 8. As I noticed the potty lines getting long, I decided to go one more time.  By the time I got done, the lines were really long.

I headed to my wave.  I should have checked out the snacks first (there was food, I have no idea what it was.)  I was fairly near the back in Wave 8.  Not sure how they determined where to put us, but with the delayed wave start (one wave per minute), it actually worked out fine for me.  We started about 10 minutes late and my wave started at minute 8.  I was already thankful I’d arranged a babysitter and was under no pressure to get home fast.

This part of the race was run on a loop through Great Falls Park.  Much of the path was flat and wide and shaded, allowing for easy passing and the crowd to thin out.  I did this part at a low 10 minute pace, which was a little fast, but I felt good and the pace felt easy.  We circled back to the parking lot to hit the first Aid Station, which was supposed to be at 2.4, but was closer to 3.  Hmm…  Here they handed out full North Face water bottles.  I debated taking one as the next stop was 6 miles and I had a full 20oz handheld.  At the last minute, I decided to grab one as I heard a volunteer say the next stop was 7 miles away.  So, I headed onto the trails with two full bottles, which I was sure I was going to regret. (We were asked not to drop them on the trail and I’m such a rule follower…) (10:08, 10:17, 11:43-water stop)

I spent the entire first mile contemplating dropping the extra water bottle any time I saw a bunch dropped together.  But I kept it.  I can’t tell you a whole lot about this part.  We ran on paths through the forest.  Much was single track.  There were a fair number of small hills, all of which I walked.  I poured water on my head. I drank nuun from my handheld.  I saw a few people take a tumble.  I just kept going.

Around mile 6, I ate a Vanilla Gu because I was STARVING.  I washed it down with water and then continued with my nuun.  I started to get tired, but this was one of those times when running lots of slow half marathons paid off.  I just kept moving along slowly.  I passed a ton of people during this time.  There was one water crossing, with an extremely muddy bank.  People were tiptoeing, trying to stay on the rocks and then struggling with the muddy steep bank.  I didn’t even bother.  I barreled through the water over to a part of the bank where there were trees and used those to get out.  I think I pissed one girl off when I commented that I wasn’t waiting in a line of people tiptoeing across…

The next three miles presented a fair number of challenges.  First up was a wicked double hill.  OMG.  We climbed and climbed on a switchback.  Then we went down a super steep switch back to almost the bottom.  And then we climbed back up again. 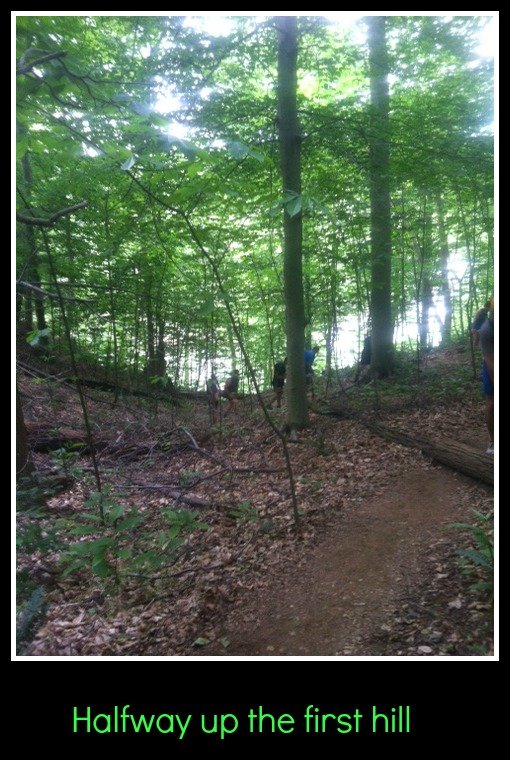 By the time this was done, I had very little left.  I soon discovered that when I get tired, I trip.  Constantly.  I can’t tell you how often I nearly went down.  The amazing thing?  I never actually fell.  I dropped my handheld once, I threw the extra bottle a few times, I knocked off my sunglasses, I twisted both ankles, but I managed to stay on my feet.  By the time I was nearing 12 miles, everything hurt.  My ankles hurt with every step.  Every time I tripped, my calf went into spasms.  My head was hurting from the heat.  But I was still running more than I was walking and I was still carrying that extra half full bottle.  About a half mile from the aid station, I emptied my bottle of nuun.  I considered pouring the extra water into my handheld and adding nuun, but just then I came across a young lady with some friends who looked like she was going to pass out.  I asked if I could help in any way and they told me they were out of water.  Suddenly, that damn extra bottle came in handy.  After carrying it for 12.5 miles, I was able to pour everything that was left in it (at least half a bottle) into her bottle.  I knew the next stop wasn’t far and her friends were going to walk her to the aid station, so I moved along. (17:23 – OMG, that hill!, 14:15, 15:45 – girl + water stop)

As I was refilling my handheld at the final Aid Station, one of the volunteers commented that we only had 1.6 miles to go.  WhaWhaWhat???  (I believe my actual response was something along the lines of “Are you f%$^ing kidding me?”) I looked at my Garmin. 12.9 miles.  I looked at the volunteer. And then I opted to fill the extra bottle with water too.

The next 1.5 miles or so I walked, I shuffled, I tripped.  I drank my entire bottle of nuun and most of the bottle of water. We went past a soccer field. I thought about stopping.  We went past a golf course. I thought about asking for a ride.  Finally, I crossed the entry to the parking lot and was told the finish was just around the corner.  I picked up the speed to something resembling my normal easy pace and ran it in.  (15:16, 5:00 and change).

There were a lot of things I liked about this race:

What really bothered me:

Would I run this race again?  Probably not, but that has little to do with the course or North Face.  I just didn’t LOVE trail racing.  I’m glad I tried it, but if I do it again, it’ll be a shorter course on a cooler day.  I ran 7 other half marathons this year, without a bit of soreness, chafe, or injury.  I came off of this one with ankles that hurt so bad I took ibuprofen (something I rarely do), chafing in all sorts of unusual places, quads that refuse to walk up stairs (yes, I’m crawling), and the tips of my toes so sore I can’t wear shoes.

But, I did it, and I ran it well. And I’m pretty darn proud of that. 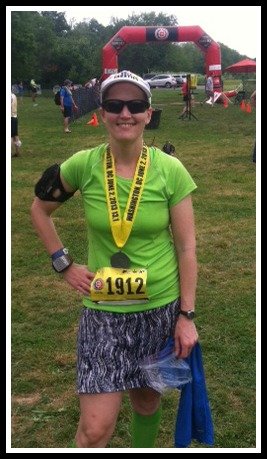 Disclaimer: North Face gave me half off my entry.  All opinions, especially the negative ones, are my own.