You are here: Home / Race Report / Race report and pulling myself together 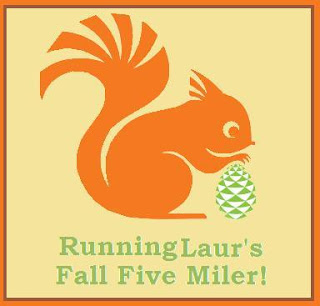 RunningLaur once again hosted a virtual race and, in my usual jump on the bandwagon fashion, I decided to participate. Lately, after I sign up for a race, I have more than a few moments of buyer’s remorse. This race was no different. I’ve had so much going on lately, that I just haven’t felt like running. My stress level has been at an extremely high level.

But, like a “real” race, once I’ve committed, I always manage to get out there and do it. So, Tuesday after I dropped Shoo at preschool, I hit the road. I didn’t want to do it, but I didn’t want to let you all down. The first three miles were great – 9:28, 8:41, 8:50. And then, well, I needed the bathroom. Badly. I was running in our neighborhood, so I could have stopped at home, but with my motivation as low as it has been lately, I was pretty sure my five miler would become a 5K if I stopped. So, I stuck it out and ended up finishing in 46:26. Certainly not my best time ever, but acceptable.
Thanks RunningLaur for giving me the motivation to actually get out there and run. Do I get an award for “Least in the mood, but did it anyways?”
In other news, life has continued to pound on me a bit. I feel like I’m meeting myself coming and going with all that I have going on. I ran a horrid 3 mile run yesterday that I thought was a lack of food (I had two cheese sticks for breakfast and didn’t run until 10:30) and sleep (Jones has a cold and he yells in his sleep when he’s sick). Turns out I was coming down with the cold.
Today I met with Jones’ teacher and a number of the specialists at his school. There’s something about verbalizing all of your worries about your child that just rips your heart wide open. I was teary eyed for much of the meeting and then came home and cried to my mommy on the phone. Thankfully, we were able to come up with a concrete plan, some of which can be put in place immediately. And I was happy to find out that academically, he’s doing just fine, so we can really just focus on helping him with his anxiety and sensitivity. We have an amazing school and for the third year in a row, he’s got an amazing teacher who really wants to help make sure he succeeds.
Between the cold and the exhaustion from the meeting, I skipped my run this evening. I just needed a break. Somehow though, I feel like a weight has been lifted and my stress level has dropped considerably. Hopefully, this and the 10K race on Saturday will be just what I need to find my way back to running as something I do because I want to, rather than just one more thing to cross off the “To Do” list.