You are here: Home / running / So, about running in Texas

I’m a city girl. I run on streets and sidewalks. Even the trails near me are pavement. While in Texas, I had two options for running: run on Beer Geek’s uncle’s property or run on the paved country highway. Dogs and random men in pickup trucks scare me, so I decided to run on the property.

The first day, I decided to run the fence line. My only goals were to not break an ankle or meet up with any critters. I now have a serious appreciation for trail runners. I felt like I spent at least half of my energy just trying not to fall over. And I was just running across some heavily grassed fields, not on rocky or uneven trails. Beer Geek took some pictures while I was running.

Here I am at the far back of the property. Beer Geek had to use the strongest zoom on our camera (I think it’s 12x) to even make me show up, LOL. This particular corner was difficult because I had to try not to step in mole holes. How fun! 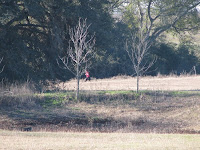 I also got to dodge lots of fire ant hills. My garmin “path” looks like I was running drunk. 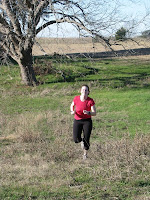 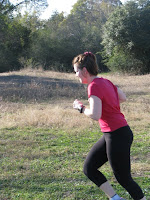 On day 2, I didn’t have as much time, so I decided to do a speed workout on their driveway. The driveway was not quite a third of a mile long. I ran out and back 5 times, most of it accompanied by their Weimaraner. He’d run ahead of me and then sit and wait for me, making me feel ridiculously slow, despite the fact that I ran the 3 miles at an 8:30 pace. Beer Geek didn’t take any pictures of me running, but here’s a pic of Shoo walking on the driveway near the house. What you can’t see is the nice hill at the highway end that was, of course, accompanied by a strong headwind. 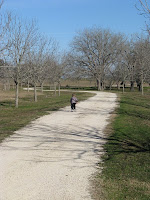 And the oranges in the pool? Well, aren’t these just beautiful? 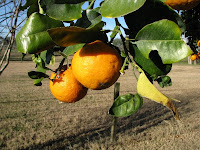 Well, they taste like a cross between a lemon and a grapefruit. (And everyone had to actually taste them to believe how bad they were.) So, the boys spent HOURS throwing oranges into the pool, fishing them out with a rake, and then throwing them back in. I was so sure I’d be jumping in after one of them that I spent the entire afternoon sitting by the pool without my shoes on. No sense ruining my good shoes when I went in to save a kid. Thankfully, no one fell in and they had a great time.

I haven’t run since we got back and I am SO in need of exercise. And apparently Glaven was channeling my scale in the comments. The poor thing cried when I stepped on it. I didn’t even know it was possible to gain that much weight in four days. Sigh.