Well, it was definitely wild.  And wet.

This past weekend I was in Shepherdstown, WV for the Chesapeake Watershed Forum.  Conveniently, Freedom’s Run was the same weekend and they offered everything from a 5k to a full marathon.  After a full day of conference stuff, I headed over to packet pick up with my parents and managed to switch to the 5k.  (I’m attempting to have as few 5k’s as my state races as possible, but I’m not in 10k shape.  Sad but true.)

Anyways, packet pickup was a breeze and I got to talk to one of the guys at Two Rivers Treads, which has the Center for Natural Running and Walking.  We spent some time discussing my injuries and he watched me run.  His verdict?  I run too hard.  So, in addition to all the stuff from the chiro, I’m going to try to focus on not plodding and instead running quick and light.

Saturday morning, fall had arrived in a big way.  Friday was shorts and t-shirt weather.  Saturday was long pants, sweater and RAIN JACKET weather.  I put on a random combination of the clothes I had with me and donned a baseball cap.  I opted to leave my phone with Beer Geek (foreshadowing!) and realized when I hit the start line that I’d forgotten my Garmin.  Sigh.  We walked over to the start, hit the porta potty (no lines at all!!!), and it was time.

I started at the back of the pack with my mom.  I wanted to be forced to start slow.  And I did.  While I don’t know my exact pace, I made sure I ran at what felt like my long run pace – slow and easy.  We had a wide path/road for the first mile, so while I passed tons of people in that part, I never felt like I had to do a lot of weaving.  I hit the halfway turnaround feeling like I was just out for a casual jog.  My achilles was fine, but my knee was hurting and the mist turned into a real rain.  I decided to pick it up a little and just get it over with.  I would have negative split the race, but we had to run up a winding ramp back up to the road off of the C&O canal.  I was wet, cold, and crabby, so I ended up walking some of that.  (Doesn’t matter how your body feels when your brain decides to give up.)  I did sprint at the very end, but all in all, it was not an impressive race for me, in large part because I chose not to push myself. 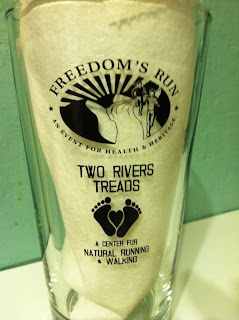 Glad I got it done, but this certainly won’t win the award for best race in my 50 states quest.