Last week the boys had Thursday and Friday off of school, so we headed down to the Outer Banks of North Carolina for a little family vacation (more on the vacation part tomorrow.) I was able to find a race on Saturday, so I decided to knock off another state.

After two days of awesome weather, I woke in the wee hours of Saturday morning to pouring rain and strong winds.  Crap!  I don’t mind running in a little rain, but steady downpour is not my thing.  Luckily, the race wasn’t until noon.  As the morning wound towards noon, there appeared to be a break in the rain coming.  It was still windy, so I chose to wear my windbreaker with shorts and a short sleeve shirt.

The race I was running was the inaugural Hot Pursuit 8k, which was in honor of fallen officers of Dare County, NC. 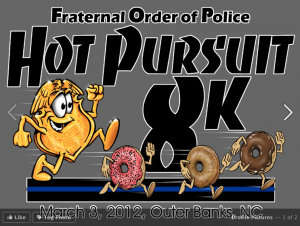 The race was touted as hilly and challenging.  I compared it to my neighborhood and thought “no big deal”.  Turns out I was wrong.  It was a small race and started right on time with a yell of “ready, set, go!”  Within the first few steps, my hat got blown off.  I grabbed it and stuck it in my pocket.  I also knew within the first quarter mile that my legs were not in the game.  Not really sure why, but they felt like they had a build up of lactic acid, yet I was just starting and I wasn’t going that fast.  Maybe it had to do with the walking we’d done the previous two days.  Maybe I was still recovering from my longest run in ages that I did on Tuesday.  Who knows?  All I know is that the race became all about my mental strength.  Could I keep my legs turning over even though they were tired?

Yes, yes, I could.  Despite the tired legs, a challenging course (the hills were the worst kind – long and just steep enough to be hard), and a foot that went numb at mile 3 (shoe tied too tight?), I managed to get under 45 minutes (my goal) AND only get passed by three people. 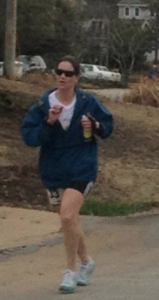 Look, I’m exhausted, but I’m not heel striking! You can tell I’m exhausted because my head always leans that way when I’m tired. LOL

I finished the race feeling like I’d run a half marathon.  Thankfully, this race knew how to put on a finish line party.  Dunkin donuts?  Yes, thank you, I’ll take two.   All in all, while I didn’t have a great race, the race itself was awesome and very well organized.  I highly recommend running it if you are ever in that area.

And another state bites the dust. Only 32 more to go!