You are here: Home / half marathons / State #9: Rainy and Hilly

After a week of spring break down in Mississippi, we headed up to Lynchburg, Tennessee for the Oak Barrel Half Marathon. Poor Shoo had a stomach bug, so we ended up stopping multiple times for him. What should have been an 8 hour drive ended up being quite a bit longer. Finally, we made it to Lynchburg and headed over to the Jack Daniel’s Distillery to pick up my race packet and take a tour. 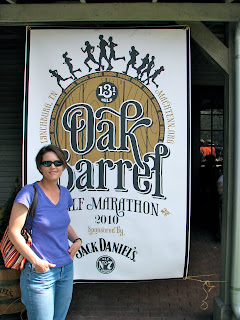 The tour was awesome and I highly recommend taking it if you are ever in the area. I enjoyed it, despite hating the smell of whisky and suffering from flashbacks to college football games. ;o)
Saturday morning, Beer Geek woke me to tell me that a huge thunderstorm was going to hit right as the race started. I quickly headed over to the start line to pick up my timing chip (my one issue with the race organizers) and then came back to the hotel to stay dry as long as possible. Finally, I had to just accept that I was going to be wet. Beer Geek and the boys dropped me off near the start line, where I lucked out and ran into Missy! I had forgotten that in rural areas my cell battery doesn’t last long, so my cell was dead and I missed her call. It was great to talk to her for a few minutes before the race started.
After an, umm, interesting rendition of the National Anthem, we were off! The race started out mostly flat, with lovely scenery. At one point, a herd of horses was running along the fence line with us. I had decided to run with my windbreaker on and was about to take it off when suddenly the wind and rain hit. At one point, the rain was coming sideways! Needless to say, I was drenched right down to my socks and underwear and it was only mile 3. We had been warned that mile 4-5 was a long uphill. I managed to run (and I’m using that term lightly) the first three quarters of that mile, but the last quarter was a challenge to even walk up. That mile ended up being slower than my next slowest mile by 2 minutes! (12:09). Once we survived that mile, there were 5 more of rolling hills and then the last four were flat to downhill.
I didn’t really push myself too hard and ran comfortably for all except the last half mile. I would have liked to have hit 2:10, but ended up with 2:11:something, which was totally acceptable given the weather and the hills. All in all, this was a well organized race. The shirt is a nice long sleeve technical T and the medal was made from an oak barrel (it smells like Jack LOL). There were regularly spaced water and gatorade stops and fruit at one of the last stops. I ate a half a banana at mile 9 and found that real food works well for me! I highly recommend this race if you are ever in the area (but don’t expect to PR with these hills LOL). 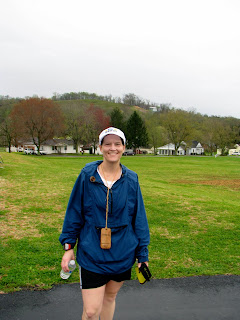 My jacket is actually a lighter blue – I’m completely soaked in this picture.
After the race, we hit the road to get up to Roanoke for the night. Because of the hills, I was already tight by the time we left and I didn’t have time for an ice bath. When we got to Roanoke, I could barely walk! Thankfully, we stopped for dinner at the Bull and Bones Brewhaus and I was able to get my customary post race sampler. ;o) 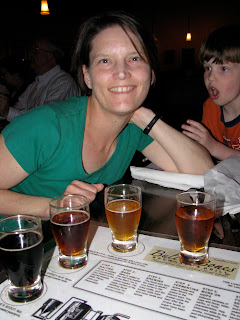 Now I need to get everything unpacked and put away, while contending with the stomach bug that Shoo shared (at least it didn’t happen during the race) and legs that still hurt.