Short story: I ran with C.Mom at her pace and had an absolutely wonderful time. I really ought to run more races for fun!

I got up this morning at 3:45 am so that I could hit the road by 5:00 am. One might think I was driving a distance to a race, but really the race start is less than 20 miles from my house. Unfortunately (for me), this race is a point to point race. I drove over to National Harbor to park my car. On the trip over there, I realized I had remembered everything except my id or any money. Luckily, there was plenty of free parking, so by 5:30, I was parked, had run into a friend, and was on a bus out to Mount Vernon. The bus trip and meeting up with C.Mom at the start went smoothly and we just hung out and chatted until the race started at 7:30 am.

I love this course. The GW Parkway is beautiful and has lots of shade. It also has nice, rolling hills. The downhills are fun, but not so steep as to hurt the quads and the uphills are totally manageable. I grabbed an oreo at mile 5 (loved that!) and we had a potty stop (more on that later) and we kept on going. It was pretty sunny out and getting warmer, but it was still a nice race day. Then we got there.

The Bridge! It has been billed as a pretty hard uphill. 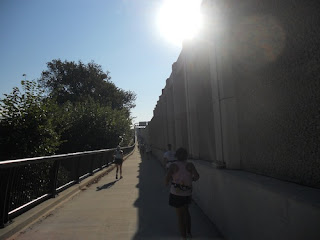 I have to admit, I didn’t find it that challenging. I’m not sure if it was because I was running around my long run pace rather than race pace or because I have so many hills around my house, but I felt great on the bridge. In fact, I was able to run ahead and then turn around and take C.Mom’s picture. 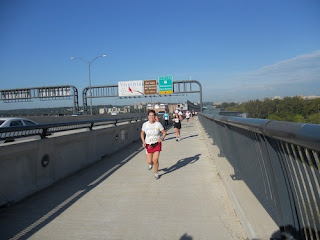 I had my camera in my hand for most of the rest of the race.  It was so much fun.  I felt kind of bad because I was feeling fresh and having a good time and all around me people were struggling.  Then we ran by a medic and I took his picture (didn’t turn out), so he offered to take our picture.  Fun! 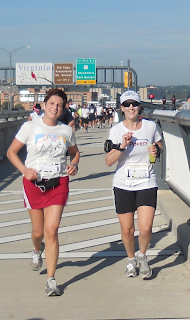 Then, it was down off the bridge and up a spiral to another little bridge.  Finally, we headed into National Harbor with less than a 5k left. 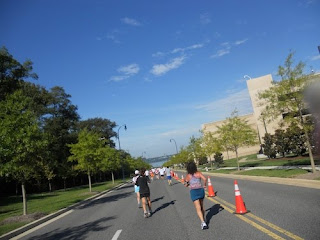 In the last two miles, there was a big chunk that was dirt and rock, with a small amount of gravel section.  I wasn’t thrilled with that part.  I was afraid I’d step wrong.  It was also pretty narrow, so it was hard to pass anyone.  After that, there was a short bit of paved section left.  I pushed C.Mom to give it all she had left and she gave it her all!  For the first time ever, I didn’t even look at the clock as I finished, but I think it was somewhere in the 2:25 range.

All in all, this was an excellent race.  I had a lot of fun and there were plenty of water stops and I got an oreo.  ;o)  I have only two complaints about this race and only one of them could be fixed.  My first complaint was the number of porta potties.  We ended up spending more than 5 minutes standing in line to use the potty at mile 5.   The lines looked similar at every one we passed.  It would have been nice if there’d been an extra one at each stop or slightly more frequent opportunities.

My biggest complaint has to do with the logistics and I’m pretty sure there is no other way to handle this.  I was gone from my house for more than 6 hours to run a race nearby that took me less than 2.5 hours to run.  I didn’t have much of a parking problem, but by the time I was in the bus riding out, the lines were horrid.  Then we had to wait for over an hour at the start while people were transported.  Then it took me over a half hour to get out of National Harbor.    I’m not sure there’s any other way to handle this race, but it makes it pretty low on my list of races to run.  Too bad too, because otherwise, it was a well-organized race and a great course.  If we had stayed at the hotel, things would have been simpler, but I just can’t justify it.

So, great race, great fun, but I probably won’t run it again.