Virginia is a Southern state.  We don’t get a huge amount of snow each year, but most years we get *some* snow.  (Some years we get walloped, but that’s a topic for another post…)

I have an older pair of Yaktrax Run that I think was sent to me to review.  Maybe. Probably.  Who knows… 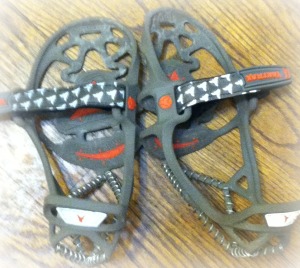 Anyways, I’ve had them for a couple of years and every time I need them, I’m so happy to have them.  ‘Cause, even with a treadmill in the basement,  sometimes I just need to run outside. (Yes, I realize it wasn’t that long ago when I stated I wasn’t bada$$ enough to run outside in the cold weather. Sometimes you just have to.)

According to the company:

The Yaktrax Run is an ice traction device anatomically designed for use with running shoes. Run naturally on packed snow and ice with the Yaktrax Run’s combination of removable spikes and steel coils, providing 360° of unbeatable traction. Continue your training during the winter with the same stability you are accustomed to on dry surfaces. The Yaktrax Run can be worn in temperatures as low as ‑41° Fahrenheit.

Just for the record, you will never find me outside when it’s -41.  Never.

I’ve run in them a few times and am beginning to figure out when they work best.  Unfortunately, they aren’t great when you are moving back and forth from snow to bare pavement.  A few strides of bare pavement is fine.  A quarter mile, not so much.  In fact, yesterday, after a mile where I intentionally ran on every bit of snow and ice I could find, I took them off and ran the next five miles without.

But they are pretty darn awesome when you’ve got snow packed roads and sidewalks or even consistently slushy roads.

They worked great in this: 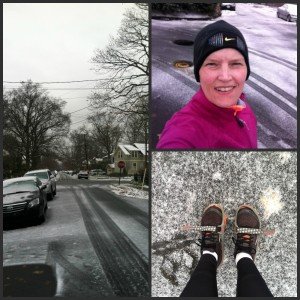 Not so much in this case (unless I stayed on the snow part, which wasn’t consistently there): 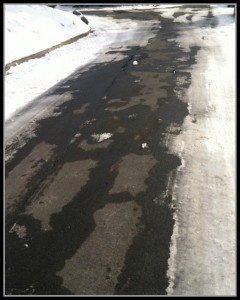 (I just noticed in the description from the website that the front spikes are removable and checked my pair.  Sure enough, they are.  I think the next time that the roads are like they were yesterday with a small amount of snow pack and a lot of slush, that I’ll try them without the spikes and see how that works.) 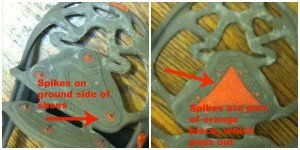 As far as actual usage goes, they are simple to put on, stay in place great, and have worked with every pair of running shoes I’ve tried.  They don’t change my gait at all and actually allow me to run in a much more relaxed manner than when I’m running without them and dodging the icy spots.  When there is enough snow on the ground to hide the noise, I actually forget that I have them on.

I definitely think that if you get even one snow storm a year that coats roads, they are worth it.  And I bet they would have come in handy yesterday if I’d wanted to run on one of the local paved trails instead of in my neighborhood.  I imagine mine will continue to work for the occasional run for years to come.

And we all know, when you NEED to get outside to run, anything that makes it possible is priceless.

Disclaimer: I may have gotten these for free. Or I might have bought them. I really can’t remember.  Either way,  all opinions are my own.