Lately, all of my running has been done for one reason: to train for this crazy ass goal of five half marathons in five days.  Don’t get me wrong, I’m excited about my goal and a lot of my runs have been enjoyable, but they all have a goal: to build my mileage high enough that I can run 65.5 miles in one week and not get hurt.

Not very exciting, huh?  I’m just plodding along for a really.long.time. every day.  In fact, running has become the thing I schedule everything else around.  When a run is going to take up more than an hour every day (and often more like 2.5-3 if you consider the getting dressed and ready, running, eating, showering time), it plays a major role in the daily planning.  If I’m not running, I fill my day to the brim with trying to catch  up with all the other things in my life, like laundry, grocery shopping, and that little thing I like to call a job.

Yesterday was different.  It was a planned cross training/rest day.  I had a yoga class on the agenda and I hadn’t grocery shopped the day before due to schools being out.  And I won’t even get into my to do list.  Oy. But, when I stepped out the door to take my kids to school, I was surprised by the temperature.  And I thought, “I want to run”.  Not, “I have to run”, but “I want to”.  I made myself go to yoga anyways (I so need the core work!)

Thus began an internal conversation I haven’t had in a while:

So off I went, in a running skirt and short sleeves!  And while I’d love to say that it was a glorious run that felt amazing and rainbows and unicorns appeared, well, that would be a lie.  My legs were tired, my stomach rebelled (the last mile was rather uncomfortable), I’m still trying to figure out my shoe issue…

But!  For the first time in a while, I ran for the pure joy of running.  And I loved every single minute because I was doing what I wanted to at the pace I felt like going (fast! for me)  for as long as I felt like running (or until my stomach said STOP!).  So, somehow, it was 6 miles of pure bliss!

It’s always good to be reminded that I *choose* to run because I *love* to run.

Now, WIAW… Huge thanks to Jenn for inspiring me to actually pay attention to what I’m eating.

I’m still following a paleo-ish diet.  I’d guess that most days I’m in the 65 to 70% compliant range and every once in a while venture closer to 95% (I just haven’t found a happy replacement for my milk in my coffee).  And then some days, I don’t even come close (Hello, Beer Walk and pizza!).  But I’m beginning to find a good balance that sustains my running and I’m beginning to find “replacements” for some of my go to meals.

Breakfasts are less frequently this: 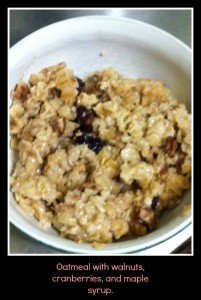 And are more frequently something like this (often with the addition of an egg): 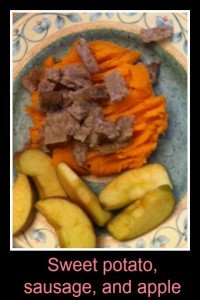 Lunches continue to be basically a hash of whatever I can find in the fridge – lots of veggies with either an egg cooked in or some meat added. (This meal is almost always Paleo compliant.) 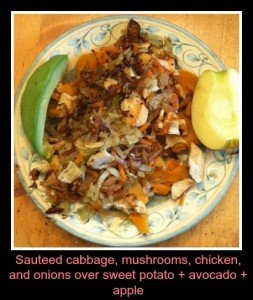 Dinners continue to be the hardest part.  I’m already dealing with somewhat picky kids (not to mention Jones’ nut allergy), plus Beer Geek is not interested in joining me in this adventure.

Here’s one of my “successes” this week: 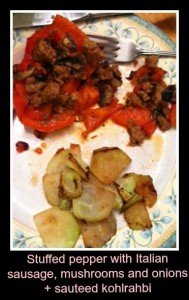 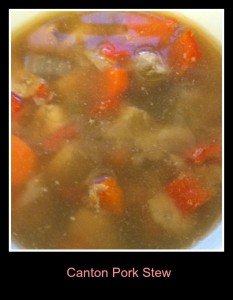 Help me tweak this recipe to make it more “paleo”.  (If you don’t eat paleo, this is a super yummy stew that all of us love.  It’s even better if you add Japonica Rice.  I’ve made it so many times the cookbook opens directly to this page LOL)

Stir in carrots and green pepper; cover and simmer 10 minutes or until pork and veggies are tender. Blend soy sauce into cornstarch in a cup until smooth. Stir into stew.
Cook and stir 1 minute or until stew boils and thickens.
Serve as is or over rice.

As you might notice, I’m pretty sure sherry, soy sauce and corn starch are not paleo.  Any suggestions on what could replace them?