I'm gonna whine for a minute here. I got some lovely new shoes yesterday. (Asics Gel Nimbus, not Cumulus). And they do look quite lovely. Unfortunately they are horribly uncomfortable to run in. Because they are TOO DAMN SMALL. Ugh. I went in with slightly swollen feet from running and bought shoes that the running guy said had plenty of room. But, no, they apparently didn't as 3 miles into my 6 mile run today, my toe started hitting the front and by mile 5, I had to stop. My foot hurt for most of the day. I'm hoping they'll exchange them, but my problem is that the other foot is already a bit lost in this size. I get the feeling that I'll be buying a half size bigger and just wearing two different sized shoes. Doesn't that … END_OF_DOCUMENT_TOKEN_TO_BE_REPLACED

Between Hanna and the upcoming 20 miler on Friday, I decided I need to skip the rest day today and run. A friend and I trade of little kids while the big ones are at school and today was my kid free day. I hit the road around 9 am and it was starting to get a bit hot and humid already. The first five went great (slightly faster than a 10 minute pace, even with hitting every darn stoplight red). I decided to throw in one extra mile and that was a bit much. It took me about 13 minutes to do 1.2 miles, but I had to do it to get back to my house. :o)Shoo starts preschool tomorrow, so if that goes well, I'll get in another five to six miles and then take two rest days before the 20 miler. Shoo was a preschool dropout last fall, so we'll … END_OF_DOCUMENT_TOKEN_TO_BE_REPLACED

After Hanna moved out, a small cold front moved in. When I hit the road for my long run this morning at 6:30am, it was actually a bit chilly. Once again, I headed over to the first hill of the MCM. I WILL get to the point that it is nothing to me (or if not nothing, at least a challenge I've done enough to know what speed to take it at). Anyways, I had an awesome run to day. The weather was perfect and my body felt good. I did 13 miles in 2:10:41. I was totally on pace for a 10 minute average (even with a few stoplights), but I hit a hill at mile 11.75 that made me walk. I still managed to do the last mile in under 10 and the only walking I did was that hill and two long lights. Woohoo!I'm really looking forward to getting done … END_OF_DOCUMENT_TOKEN_TO_BE_REPLACED

Someone found my blog yesterday by searching hot sweaty mamas. Somehow I think my blog may not have been quite what that person was looking to find. My running schedule may be completely wacked from here on out. If I don't want to run on the treadmill, I have to save my long run until Sunday (thanks Hanna). I had already planned to move my runs up to M, T, W so that I can do 20 on Friday (Beer Geek is taking a day off work for me!) So that would put me running four days in a row, which is not something I do well. Then I need to do my runs early the next week 'cause we are heading to Charleston for a wedding. We'll be there or driving for five days, so I'll have to squeeze random runs in then as well. Then I'll have a long run on a … END_OF_DOCUMENT_TOKEN_TO_BE_REPLACED

Ingredients1 90 degree day with high humidity1 set of tired legsHills (to taste)1 small dash of shade8 ounces of water8 ounces of gatorade1 packet of sports beansCombine first two ingredients and then walk one mile with a 30 pound child on your back. Once child has been removed, start running at a nice 9:30 pace. Throw in a few hills. Turn speed down to 10:00 pace. Throw in few more hills and a splash of gatorade. Turn speed down to 10:30 pace. For kicks, throw in a few more hills. Dial the speed back to walk. Run should be halfway done by now. Continue to mix hills, water, gatorade, and sports beans while constantly turning down speed. Run is finished when all ingredients are used up. 7 horrible miles (should have been 8) in … END_OF_DOCUMENT_TOKEN_TO_BE_REPLACED

First the good news - as part of my five miler yesterday, I ran a mile for the Virtual race that Reid is running. I was nowhere near his goal of 5:00, but I did manage a nice 7:45 mile, breaking 8 minutes for the first time ever. I might have been able to be a little bit faster if I hadn't had 3 more miles to go. I did it on the treadmill (on a 1% incline) because, well, school is back in session and Shoo was napping. Total time for the 5 miles: 46:55.Today's run did not go nearly as well. I felt like I had 50 pound weights attached to my quads. It was hell. I'm not sure if it was the heat and humidity, the fast run yesterday, or all the extra walking I've been doing (it's about three quarters of a mile each way to school, so I've … END_OF_DOCUMENT_TOKEN_TO_BE_REPLACED 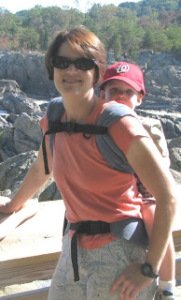 Back before we had kids, Beer Geek and I used to travel a lot. We'd do lots of hiking and other physical activities like white water rafting. One of our trips was to the island of Kauai. While there, we decided to hike up to Hanakapiai Beach. It was a fairly strenuous hike, with the added difficulties of a muddy trail and humid weather. We were passed on our hike by a woman. On her back was a small child in a backpack. I remember being absolutely amazed at her ability to get up that trail while carrying a child.Today we spent the day at Great Falls, hiking and looking around. I spent much of the morning with Shoo on my back. I was pretty impressed with myself that I could run 20 miles and two days later carry around 30 extra … END_OF_DOCUMENT_TOKEN_TO_BE_REPLACED

I ran an incredibly hard 20 miles today. I ran downhill to the start of the Marine Corps Marathon. After running the first hill of the marathon, instead of turning and continuing the marathon route, I kept going straight, which meant 2-3 miles of uphill. Then I merged with my usual route, which has some major uphills and decent downhills. To finish the run, I did an out and back that was mostly downhill out, so mostly uphill back. I did pretty well for the first 15 miles, but the uphill that was the last 4 miles just killed me. By mile18, I'd reached the point that I was running as much as I could, but walking any significant hill. My legs were just beat by the end. On the bright side, the MCM has two good hills at the beginning … END_OF_DOCUMENT_TOKEN_TO_BE_REPLACED

Usually running is my stress release. When I'm feeling down or stressed or just plain overwhelmed by life, a nice run will straighten me out. It's not often that I find that not running is a better idea.Wednesday I had reached a low that I hadn't in a long time. I was tired, stressed, and just plain crabby. When the sitter came over, I decided that I just needed a break and that running was causing some of the stress because of the upcoming marathon. I ended up making a quick trip to the grocery store and then went to the local running store to buy a couple of birthday presents. I got a new hat that seems like it might absorb more sweat (and thereby keep the sweat out of my eyes), some new socks, a few new things to try for fuel, and … END_OF_DOCUMENT_TOKEN_TO_BE_REPLACED

Thanks for all the birthday wishes. The day was... eh. The only true positive to the day was that I got my five mile run in and did it at an average of 9:33 per mile (47:45) I ran the first two miles really fast as I was desperately in need of some endorphins.Today was an eight mile run. As one of my presents to myself, I hired a babysitter for a couple of hours today and tomorrow so that I could run and get a break from the Bickersons (aka Jones and Shoo). It was a really good run and I finished in 1:17:51ish (I'm too tired to head up and find my Garmin). My legs are feeling it tonight, so I'll probably run my five tomorrow slowly. I also discovered that Powerade doesn't sit as well as Gatorade. And, of course, Powerade is what … END_OF_DOCUMENT_TOKEN_TO_BE_REPLACED

Today's my birthday. I told Jones that all I wanted for my birthday was for him to not fight with his brother. His response? "Mom, I'll give you anything else you want." LOLI'm hoping to get a five mile run in at some point today, but I'm not sure when. And I can't decide if taking a day off from running is a good birthday present to myself or if running is a good present, so I probably need to do the run. :o) I am planning a visit to a local running store in the next few days to get myself a little somethin'. … END_OF_DOCUMENT_TOKEN_TO_BE_REPLACED

This post will be mostly (entirely?) non-running related, so stop now if all you care about is running ;o)I'm on the product testing panel for a company that makes torture devices, umm, I mean "body shapers" and "slimming undergarments". I've gotten some cool items in the past to try and one or two have actually been useful in my real life. I'm supposed to wear each item three times for four hours each time and wash it at least twice. Then I have to fill out a survey.While I was on vacation, Beer Geek told me I'd gotten a new product in the mail. I asked him what it was. He wasn't sure LOL. Even when he read the product description to me, he still didn't get how it was supposed to be worn. From what we could figure out, it's a … END_OF_DOCUMENT_TOKEN_TO_BE_REPLACED